The present photo essay seeks to visualize the resilience of a transport system and how it exposes deep social differences in Chile. On the 18th October 2019 a social outbreak started, first in Santiago of Chile, to then expand the rest of the country. This seemed a moment of transformation, a turning point to address many unjust features of Chilean society, many of them related to inequalities and among them, to the experience of discomfort in public transportation.

In reaction to the massive protests, subway stations were closed, train schedules were adjusted and train frequency reduced. As public transport service was temporarily reduced bikes started to emerge, people forgot the underground world and started walking the streets, appropriating bus lanes and car lanes. Due to the COVID19 pandemic that started shortly after, the city slowed down even more and urban mobility came to a halt in many ways. Paradoxically, once mandatory quarantine ceased, the dynamics of transport were re-established. The uncomfortable daily ride that was a topic of demonstrations has been resumed unchanged, in the same inhumane fashion already perpetuated for decades. The only appreciable post-COVID19 and post-demonstrations transformation is the obligation to wear face masks, as a new addition in people’s outfits.

Below, we present a series of 19 photographs taken in Santiago’s subway. The shots are taken in three moments. The first set of pictures was taken between August and October in 2019, a period that we understand as pre-Social Outbreak. The second set of pictures was taken in October 2019 and portrays the Social Outbreak as a moment of rupture with previous experiences of mobility. The third set of photographs represents the present time, September 2020, back to what we recognize as “Social Inertia”.

The first and the third set of photographs reconstruct the timeline of a subway ride, starting with images of the platform and continuing onto the subway wagons. The second set of photographs captures the demonstrations on Plaza Baquedano -or as the protesters dubbed it Plaza de la Dignidad (Dignity Square)- and the pedestrian and bicycles traffic, following overground the underground route of Line 1, the main line of Santiago’s subway which was suspended during demonstrations. We offer a general introduction to each section and then we present the photographs, hoping to encourage the reader’s own reflection on the complexities, fictions, and inertias experienced in the global south.

The experience of a subway ride can be heaven or hell. It has always depended on when in the day you are taking the ride. For most users, everyday commute is a torture, travelling in the morning and coming back in the afternoon. The daily experience on transportation is on average stressful, suffocating, and uncomfortable. In October 2019, when the ticket price was raised for the third time in that year, social rage unleashed. Price increase was the final straw that led to what has been named “The Chilean October”. Under the statement “it’s not 30 pesos, it’s 30 years” (“no son 30 pesos son 30 años”), a raise of 30 cents in the public transportation ticket exploded/tipped, the outrage provoked by countless daily abuses perpetrated for decades. Social rage, of some, went against the subway itself. Many stations of the transportation network stopped operating for many months. 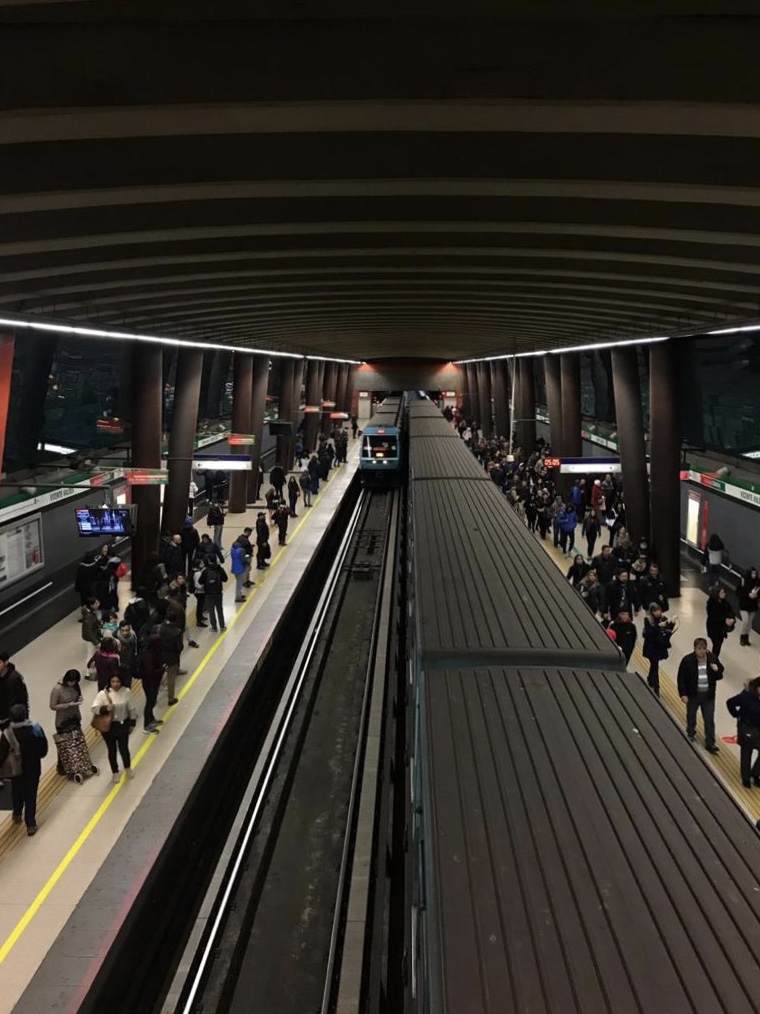 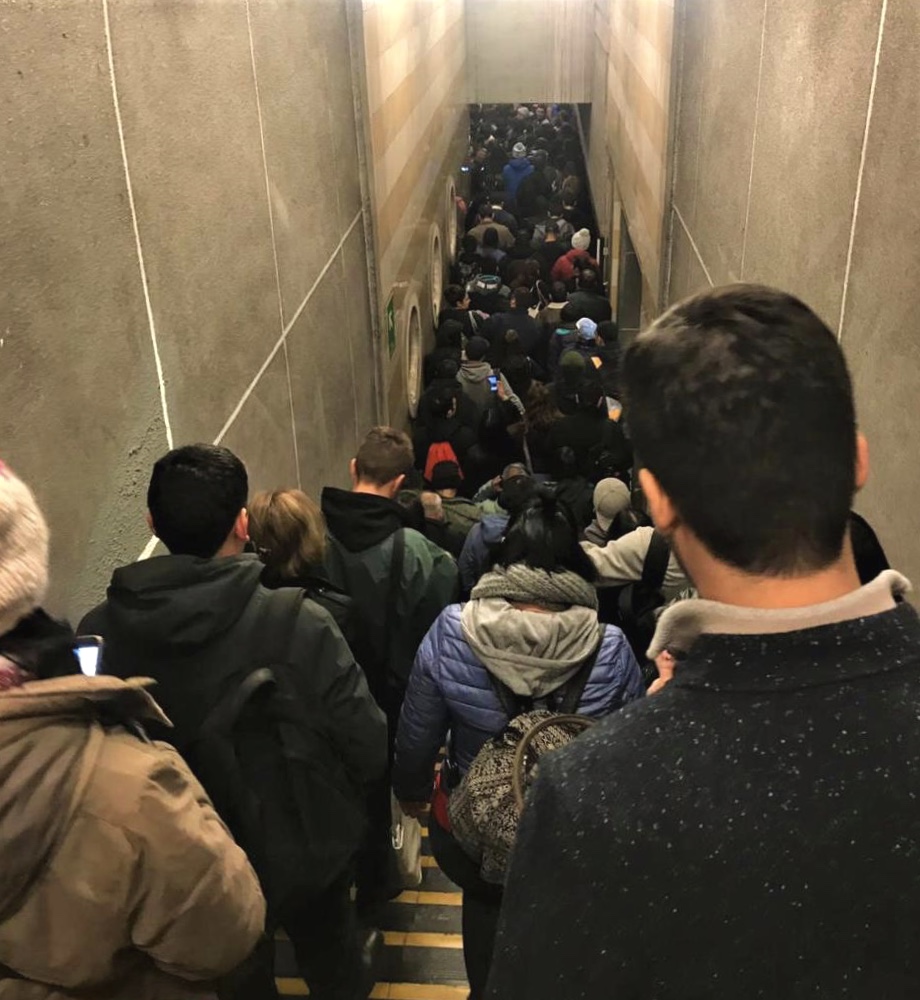 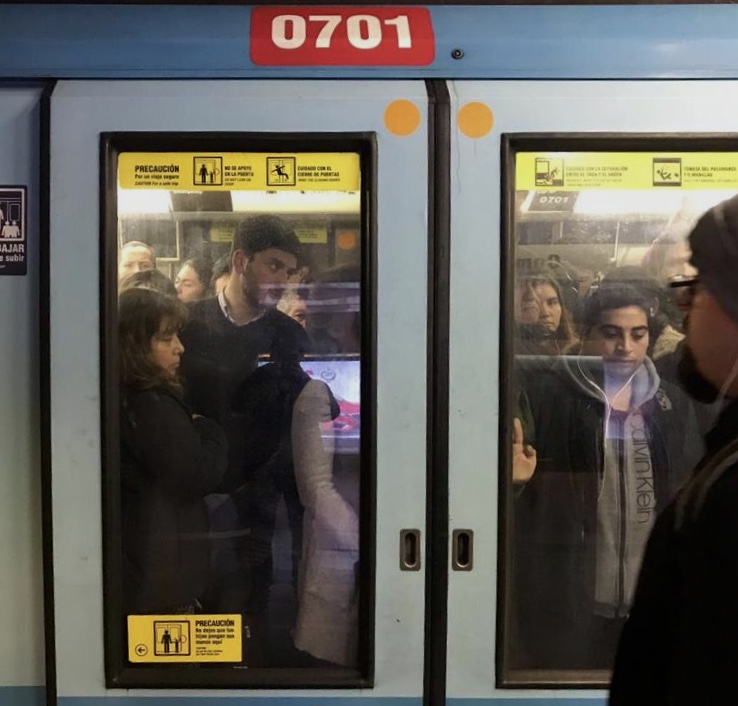 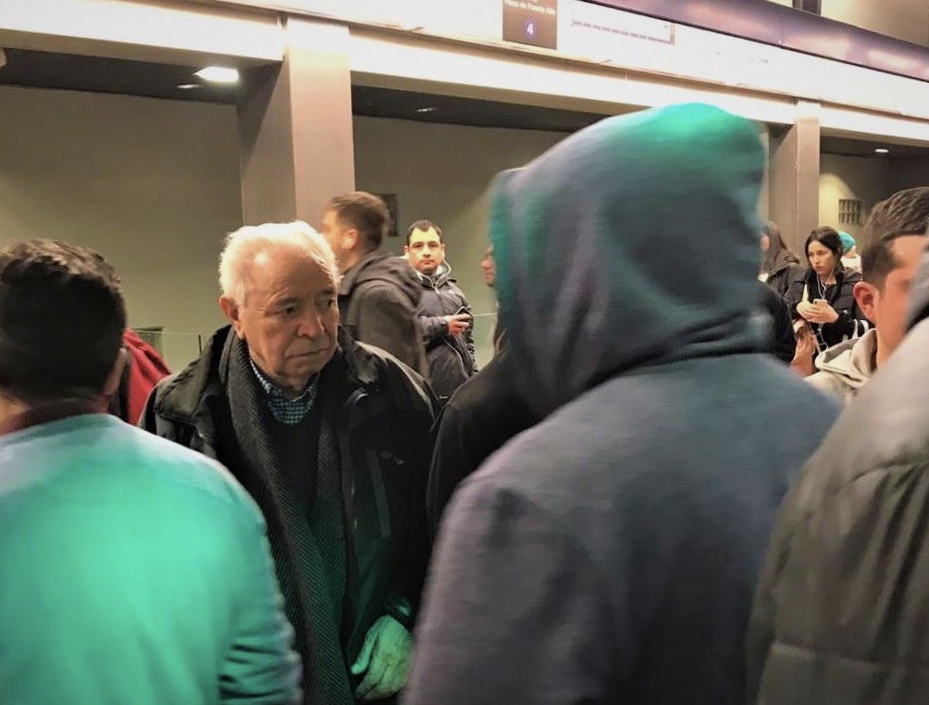 Against the current. Source: Authors 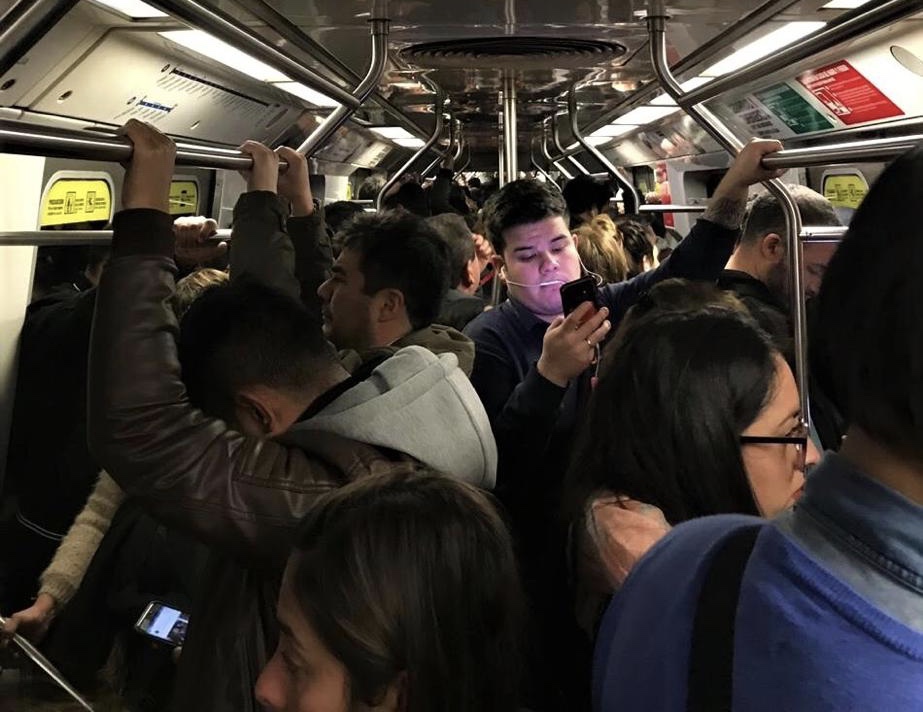 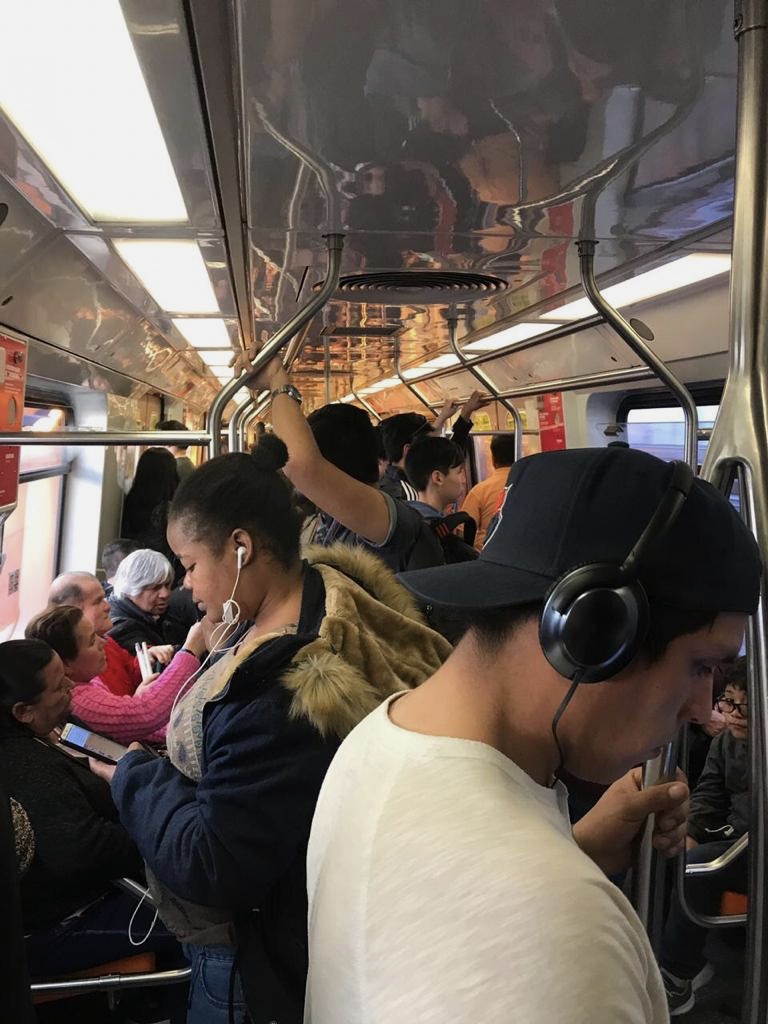 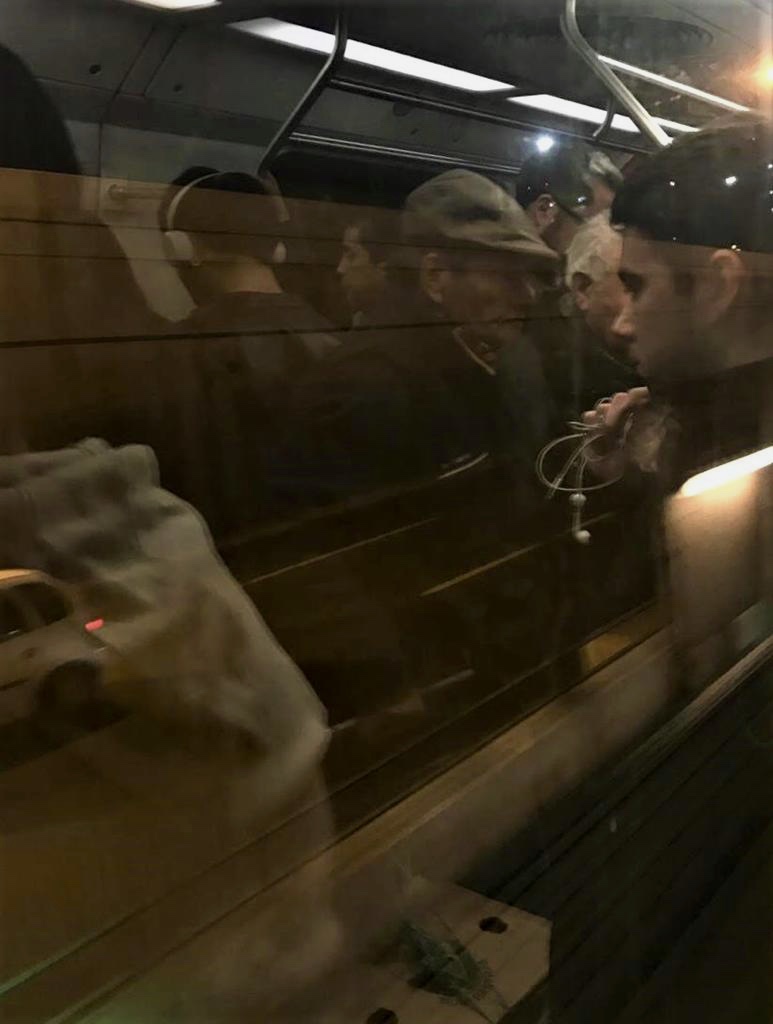 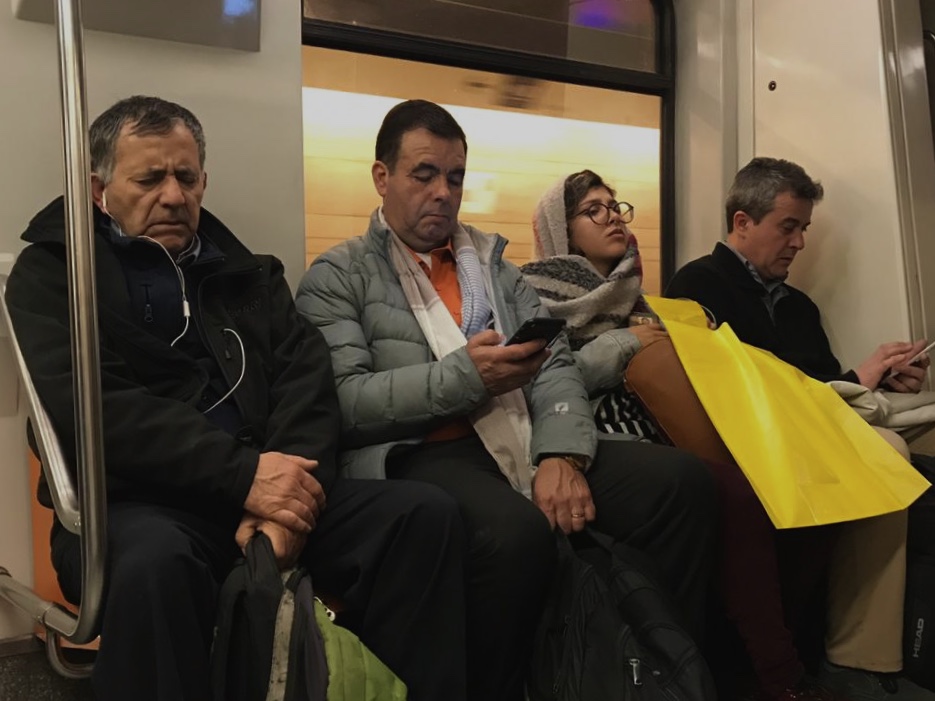 During the “Social Outbreak” of October 2019, several heterogeneous demands were advanced seeking the dream of a new social pledge (Araujo, 2019). The break with former injustices was total, after everyone sought a better quality of life and by extension a socially and territorially integrated city. The word “Dignity” resonated everywhere and on the wave of this renewed emotion, the central location and heart of the protest was renamed to “Square of Dignity”. The rage of some citizens burnt, and destroyed some subway stations. Many stations were closed to avoid them becoming the target of anger and indignation of large groups of people, expressing themselves through public spaces. Many people, as subway service was suspended, turned to the surface and took long walks to attend the massive protests, walking the subway route above ground. These journeys were performed as groups, in collective ways, with songs and conversations about a new country. A journey much closer to the idea of equality. This are the scenes before the arrival of the pandemic and quarantine into the country. 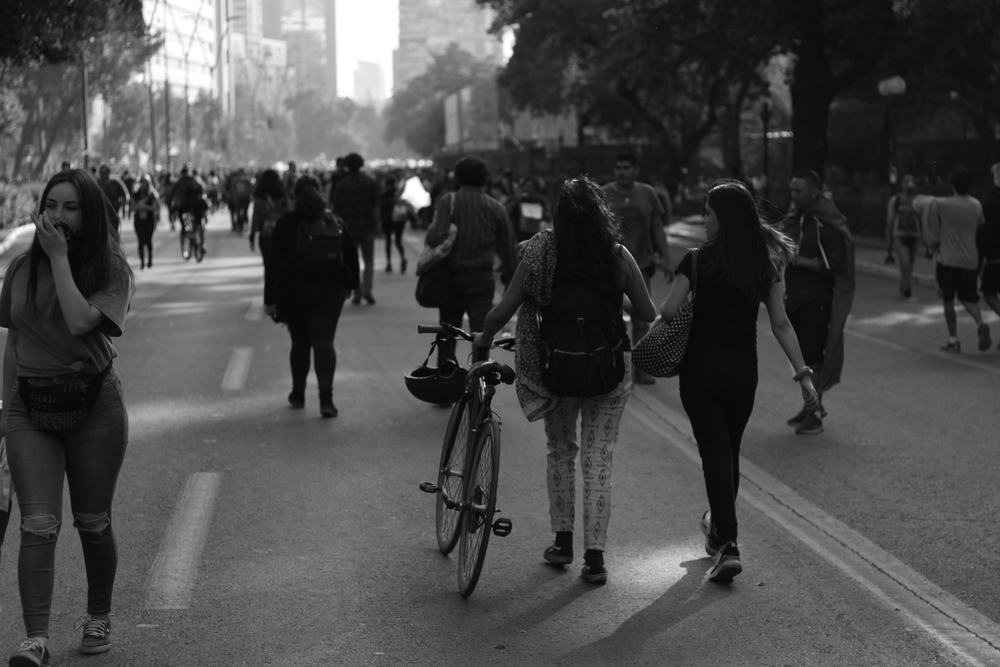 Going out to society. Source: Authors 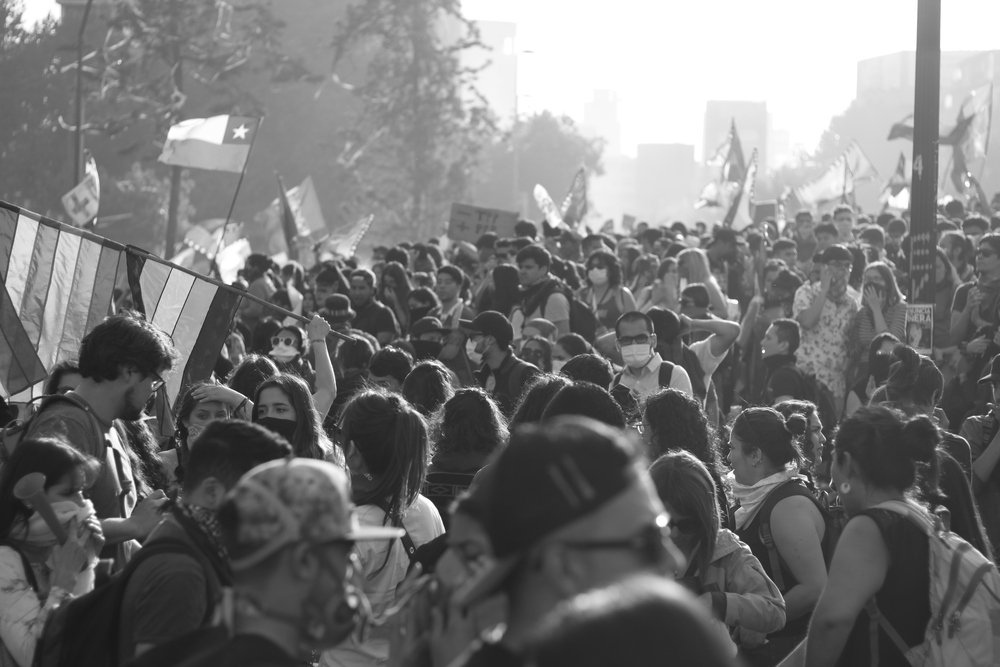 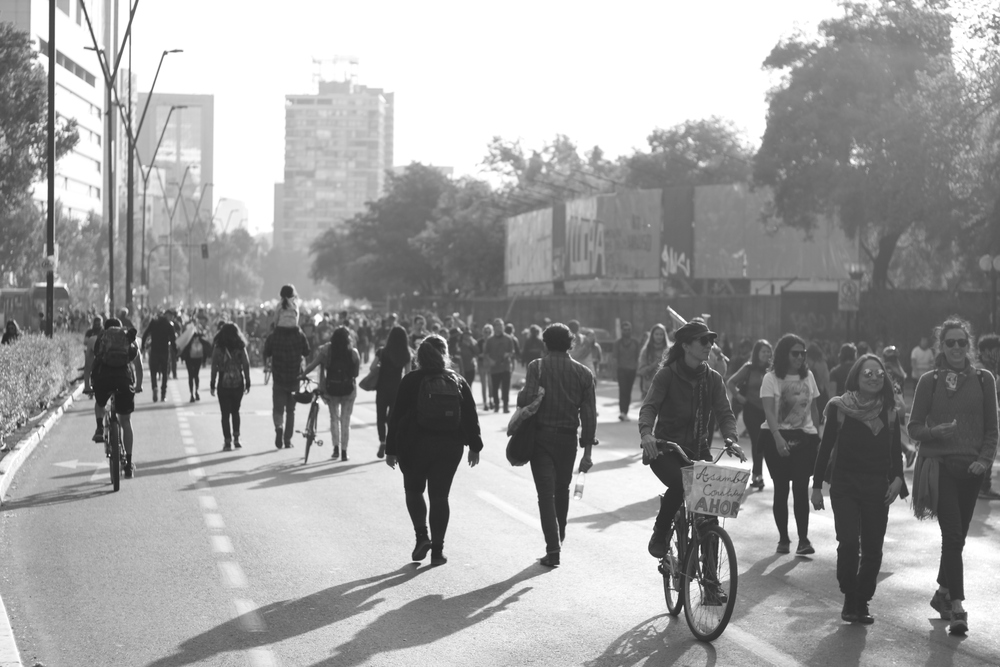 Over time, seeking to restart business after months of quarantine, the authorities proposed a “new normal”. An everyday life where social distance is seen as the solution to the urgency of avoiding the spread of the virus. In line with the proposed distancing, one would expect that suffocation on public transportation during peak hours would just be unwanted but that social distancing between passengers would be prescribed to avoid infections. Remarkably the expected transformation did not occur, not as a result of the “Social Outbreak” nor of the pandemic. The experience of an urban transport system that reproduces social injustices is still here, currently the only difference is the addition of mandatory masks. There has not been a significant change in the social experience of mobility. The virus seems to be just an accessory to a still chaotic urban mobility. Every day, in the morning and in the afternoon, people squeezed by a crowd in the subway resent living in a society where marginalization is a social, economic and cultural fact, and nowadays a public health issue as well. 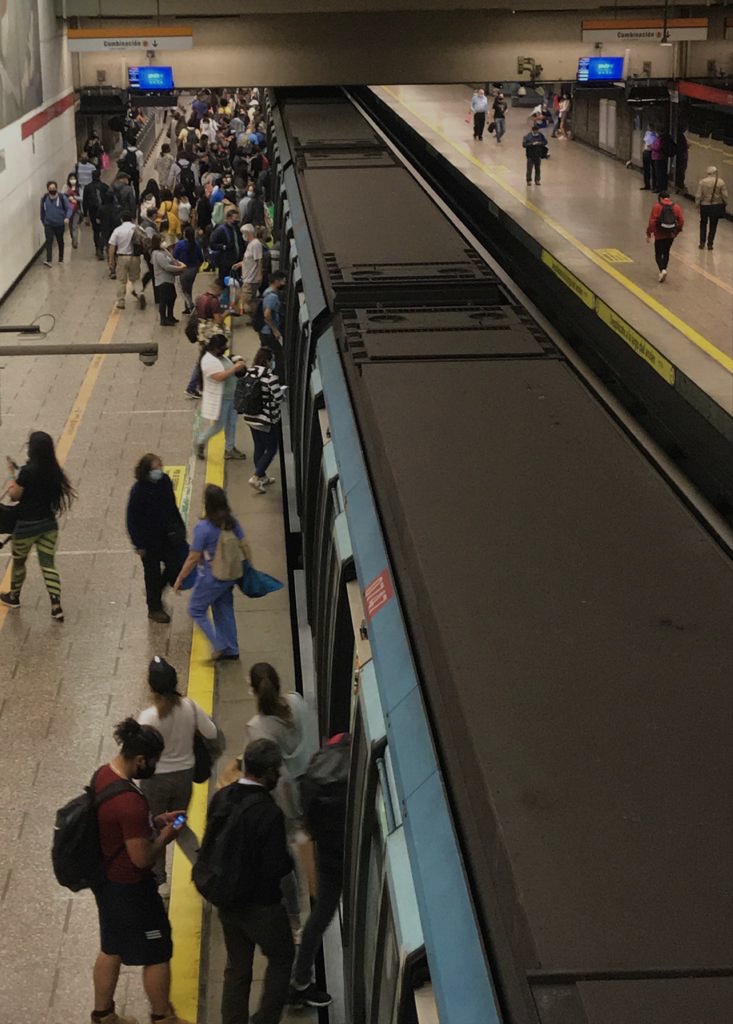 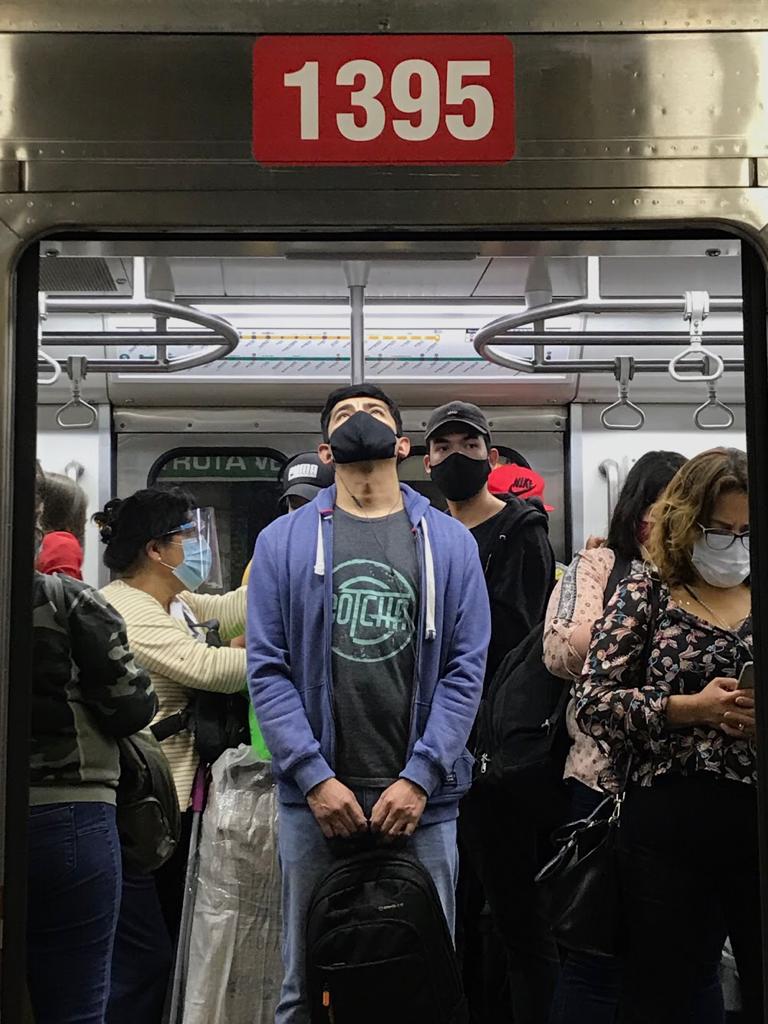 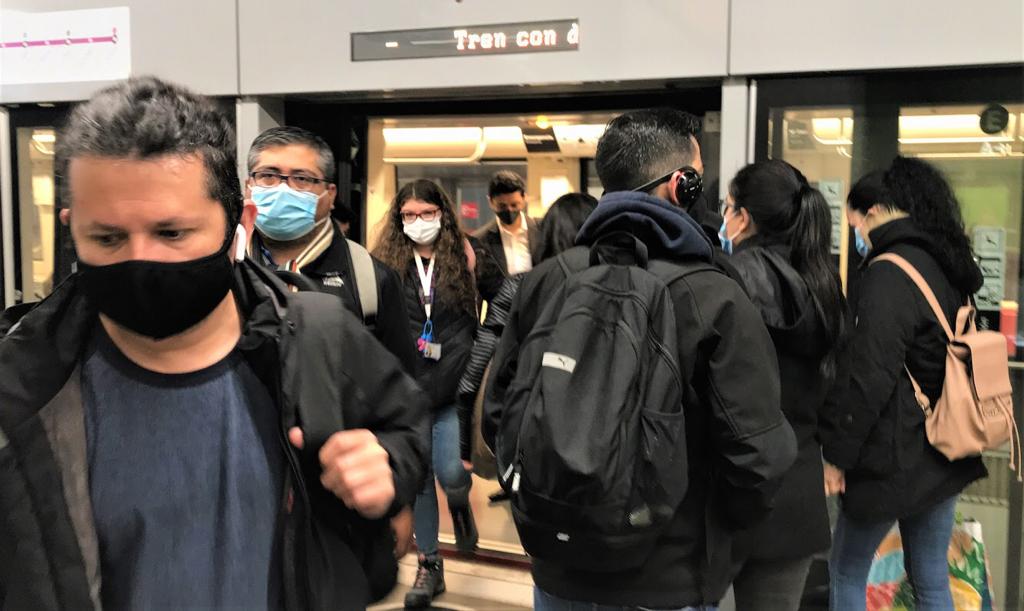 Against the current 2. Source: Authors 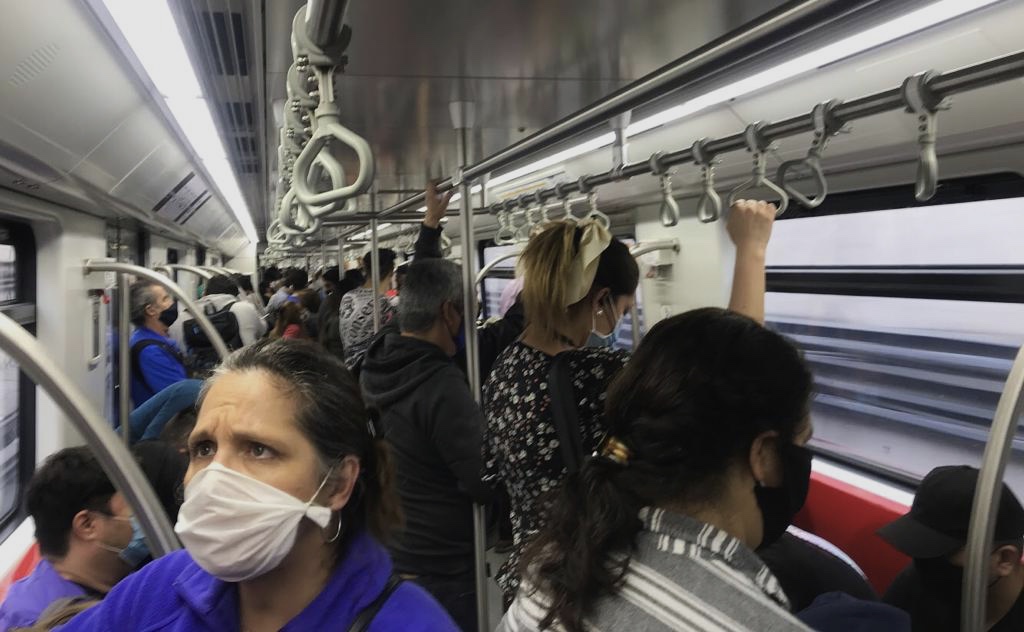 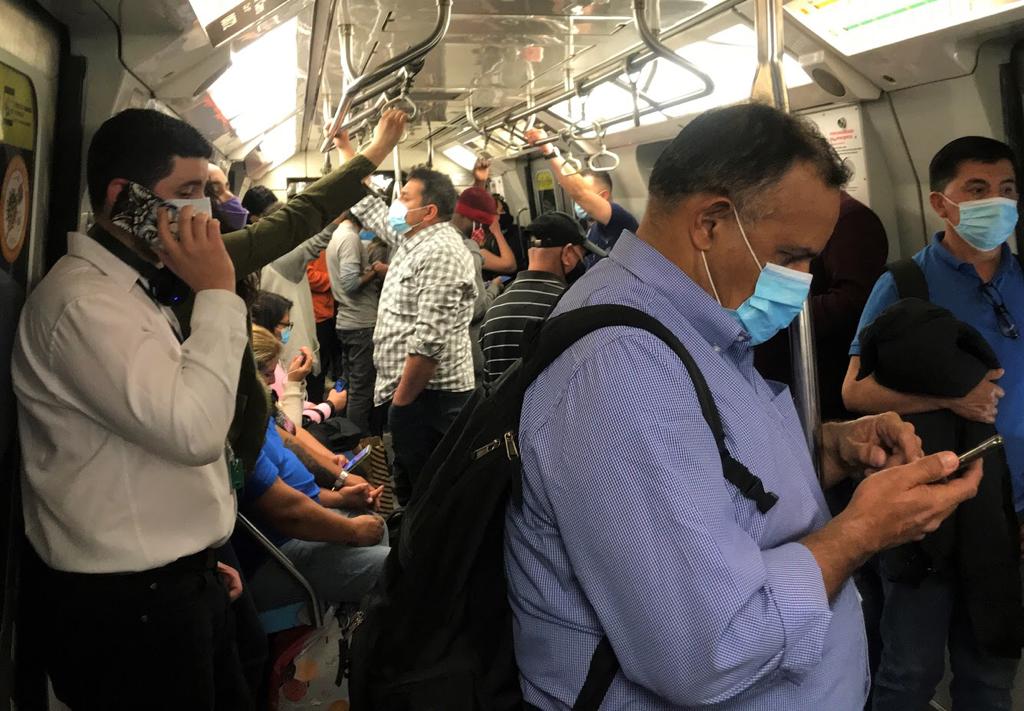 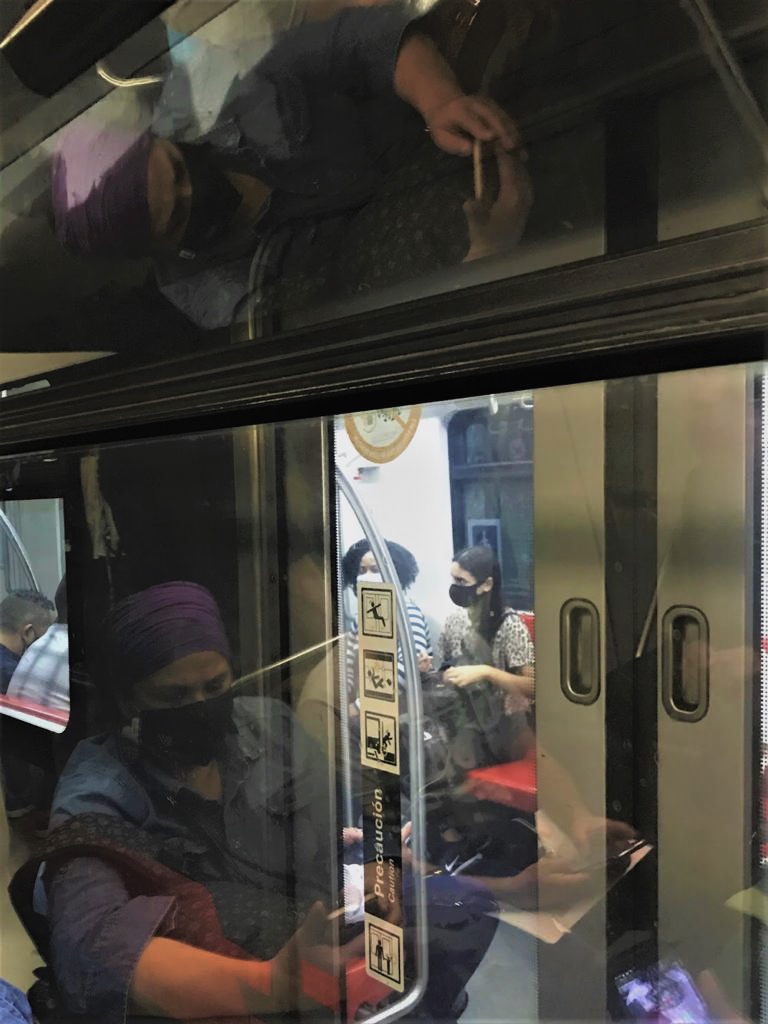 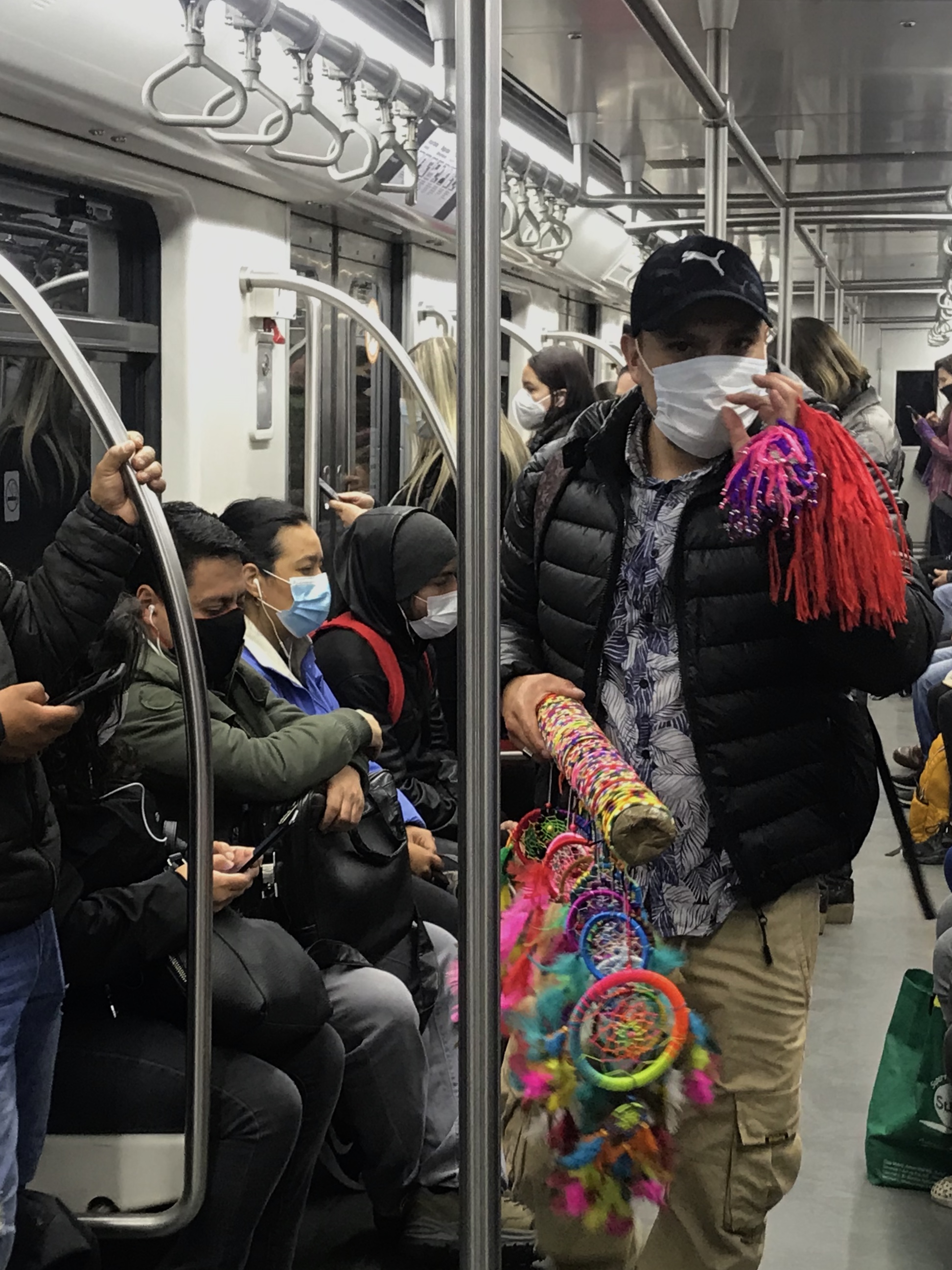 Fernando Campos-Medina is an sociologist with a Master in Housing and Urbanism, a PhD in Environmental Sociology and in Urban Sociology. He is an Assistant Professor at the Sociology Department, University of Chile, and Director of the Territorial Sociology Lab (TSL) in the same Department.

Articles
The Spatiality of 2019 Protests in Beirut
Nadine Hindi

Activism and Community Initiatives
The Pain of Others
Sasha Kurmaz

Reportage
Crowded but With Masks: On the Resilience of an Unfair Mobility, Reflections From Santiago, Chile
Fernando Campos-Medina, Iván Ojeda-Pereira and Josefa Mattei

Drawing Photography and Creative Media
I Am a Tool of Gentrification: An Experimental Documentary Series
Lyubov Matyunina

Interviews
A Right To Fight For: Berlin’s Housing Referendum in Context
with Neelke Wagner

Interviews
Cycling Without Age: The Right to Wind in Your Hair
with Pernille Bussone