athensreport.org is an interactive digital platform that maps the urban space through the route of trolley bus No. 11. It collects and archives videos, interviews, photographs and graffiti of life and protest that took place in Athens from 2008 to 2015.

December the 6th, 2008, 15-year-old student Alexandros Grigoropoulos is shot and killed by the policeman Epaminondas Korkoneas in Exarcheia, a district of Athens. This day signals the beginning of a massive wave of protests and riots against state‘s violence and repression. While the conventional media produces conservative narratives of the struggles that take place on the streets, social movements, equipped with technology, produce live streaming personal documentations. The years that followed were marked by the crisis, as the contemporary sociopolitical conjuncture of southern European societies is widely described by the dominant discourse. The rage of the revolt of 2008 turned against the neoliberal systems of governance. Peoples’ protests and riots erupted as a reaction to the political decisions and austerity measures taken from several governmental schemes, including the left wing party that won the elections for the first time. September the 20th 2015, the left wing party SYRIZA gained victory for the second time and formed a coalition government with the conservative party of AN.EL.

This crucial period serves as a timeline to the online crowdsourcing archive project, the Athens Report, initiated by multimedia artist Anna Lascari1. On a virtual map of the route of trolley bus no. 11, the platform maps urban space where protest took place and connects neighborhoods with significant sociopolitical history such us Pangrati, Exarcheia and Patissia. A virtual tour on the route provides visitors access to a continuously updated archive of digital documents along with a collection of interviews and street art. The framework of the project consists of the video route of a trolley bus, audiovisual archives, interviews and a street art archive. Sewn on the video route and affixed to the area where they have been captured, videos and photographs are being continuously uploaded by individuals and collectives that were actively engaged in the public space from 2008 to 2015. Users are invited to upload their own visual material that documents street work and protest. Under the same psychogeographical classification, the ONLINE 11 section consists of interviews -translated into English and scripted- from people who live and work in neighborhoods served by the trolley bus. The GRAFFITI ROUTE, is composed of graffiti that users have captured on building facades and other public spaces, a form of urban intervention that was at this time and still is dynamically present in the streets of Athens.

As an archive and art activist project, the Athens Report provides a ground where the notions of public, common space and the right to the city are put under a digital telescope. The community that develops in the platform, apart from archive material, shares a sense of locality—as the project is strictly defined in the boundaries of the route of a trolley bus—which inevitably slides into vagueness in the virtual world. If all the users who contribute their archives have attended those events in this particular district of Athens at this particular time, then what renders them a community that produces collective content when the actual encounter in the city is over? It seems that apart from the apparent reference point of time and place, what pervades from the physical to the virtual as an intrinsic collective quality, is the experience of the city—as subjective as it may be—through the struggles for its reclaim.

“I would like us to imagine it [Athens Report] as a tool for reflecting on the qualities of this space, which is no longer public and may already be turning into common, as they emerge out of collective actions. […] Common space may truly exist as a space shared by certain people and, through that, as a space in which they perform certain functions that have to do with their collective life.”

The Athens Report research team got involved with its community of contributors in real time and space. From the outset, to reach archives that have been kept among others in files, drawers, hard drives, burnt laptops all around Athens and abroad has been proven to be extremely challenging. The individuals and collectives who were holding this precious material had to be introduced to the Athens Report, a public project initiated by an artist that required their contribution for it to come to life. A period of meetings followed, in which, for more than four years, the Athens Report team has been linking with the protagonists and the real reporters of these events, sharing their living experience of the city, exchanging visits in their working, personal or occupied spaces. After the first contributions, the project took its own way and once it went public, users gradually started submitting their archives directly online on the UPLOAD section of the website. The Athens Report still keeps in touch with its audience since the platform is periodically being presented and discussed in a broader research context, in several panels, discussions and workshops related to urban studies, social struggles, the commons and contemporary art.

Naturally, the submitted archives are being documented and uploaded by the Athens Report team according to their relevance with the trolley route, the timeline and the events that took place regardless of their technical specs. The archive, indicatively classified within the urban map, aims to leave space for its countless interpretations to emerge. The horizontal categorization of the digital documents by their distinct affinities with the psychogeography of the city pursues free schemes of engagement by the users, who themselves develop the archive by uploading their own material. In this framework, the Athens Report can be conceived as a common ground, built through the visitors’ experience of urban space and protest. On this common web terrain visitors are invited to take part, explore the parameters of producing knowledge, form, study and question relations of power that constitute identities. 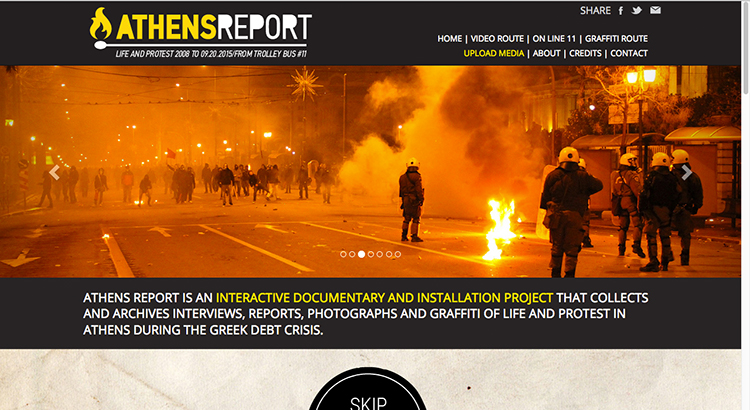 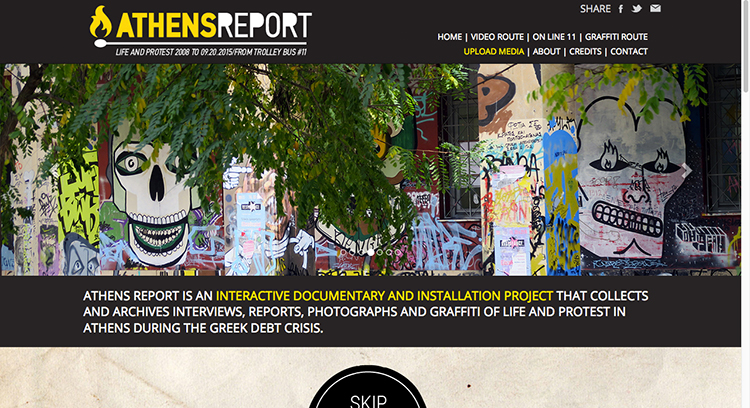 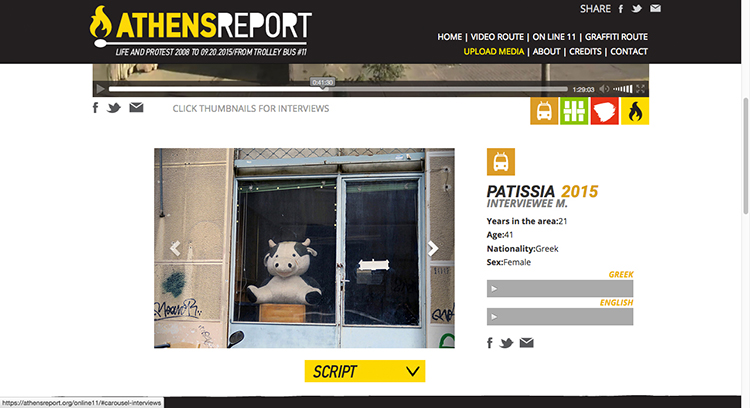 3. The video route. When the video route is paused on a certain region, the user accesses relevant archive material for that area.
(Source:https://athensreport.org/) 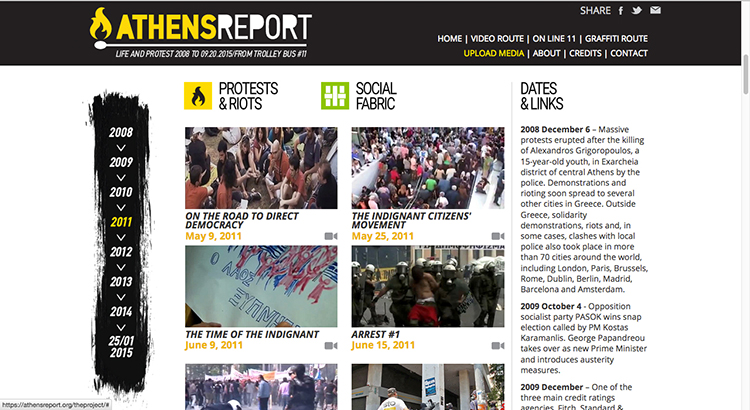 4.The audiovisual archives’ list. On the left side of the page the user chooses a year and on the right, one can find useful info on the dates.
(Source: https://athensreport.org/) 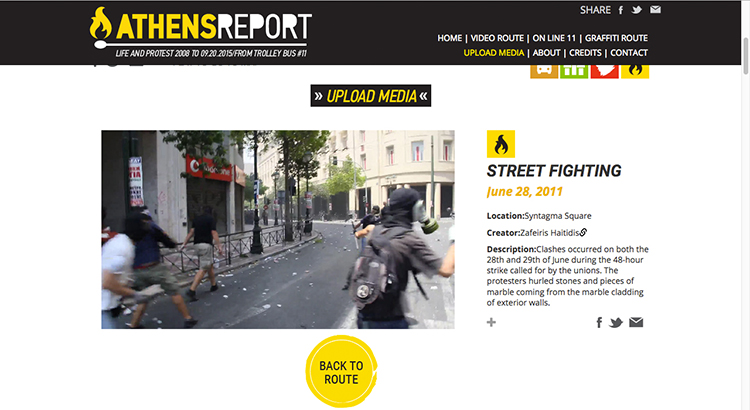 5. A video archive document. On the right side one can find info on the creator and the documentation.
(Source: https://athensreport.org/)

Christina Petkopoulou (Athens, 1992) is a researcher and curator based in Athens. She studied History and Archeology in the Department of Archeology and History of Art in the National and Kapodistrian University of Athens. She is an archivist, researcher and curator of the digital crowdsourcing archive project Athens Report. From September 2019 to January 2020 she curated the program of the interdisciplinary platform Automatic Transmission with the research-exhibition Playing Ground. In 2019 she received the Artworks Curatorial Award from the SnF Artist Fellowship Program. In 2016 she was chosen by the NEON Foundation to take part in the NEON Curatorial Exchange Program in collaboration with Whitechapel Gallery (London). She has curated exhibitions and educational programs as an independent curator and she has also collaborated with several contemporary art organizations, such as the Greek Institute of Contemporary Art―where she started her career researching and managing its archives.