VeloCity is a strategic vision that solves some of the most critical issues facing the countryside today, delivered by a team of industry experts. VeloCity is the winning proposal for National Infrastructure Commission’s placemaking ideas competition, which sought inspirational visions for the future of development within the arc encompassing Cambridge, Milton Keynes, Northampton and Oxford, one of the UK’s fastest-growing and most productive regions.

With the countryside making up 85% of the UK land area but only 18% of the population living there1, the pressure to build new homes is increasing. Yet, we see many smaller village settlements struggling to survive with the loss of community facilities, an increasingly ageing population, lack of affordable housing and people’s daily journeys wholly car dependent.

The ideas that VeloCity, an all-women team of industry experts, has been developing over the past 3 years look at tackling these issues. The focus has been to work with existing villages which already have a strong sense of place due to their morphology and social structures. By linking them as clusters through a fine grain network of cycling and walking routes, they can collectively grow and support the community facilities they have lost and be less reliant on the car. The VeloCity proposition sits within a wider context of initiatives both historic and current, located in the UK and internationally, that put into practice what good growth can look like with its social, environmental and economic benefits.

The world population continues to rise, and in the UK alone it is projected to increase by 9.7 million over the next 25 years, with more than one in 12 of the population projected to be aged 80 or over by mid-20392. Recent polls show that Britons want that quality of life indicators take priority over economy, echoed by leading economists urging governments to look beyond GDP3. We need a much fairer distribution where resilience will become key over efficiency. This could be the end of growth as we know it — the Scottish government and Glasgow are deleting ‘growth’ and replacing with ‘thrive’’; Oslo Architecture Triennale’s theme was Degrowth; and Amsterdam has introduced doughnut economics as its post-COVID-19 plan.

The pandemic has already shown that significant behavioural and societal change can happen — and happen quickly. If there is anything positive coming out from the Covid19 pandemic, it is the opportunity to see that radical change is possible.

The village and village life have much to offer people in terms of community, access to the countryside and quality of life. But growth within smaller settlements is constrained and little thinking has been given to how we support and reinvigorate rural communities. The current development we see happening in villages is small-scale, low-density sprawl that follows roads out of villages forming hard edges with the existing community and surrounding countryside.

There are over 10,000 villages in England, set only 2-3 miles apart4 and they offer an opportunity to advance a strategy which can alleviate housing pressure on the towns and turn villages into well-connected places for 21st century living. In simple terms, it is about integrating with what is already there and tapping into the sense of place. 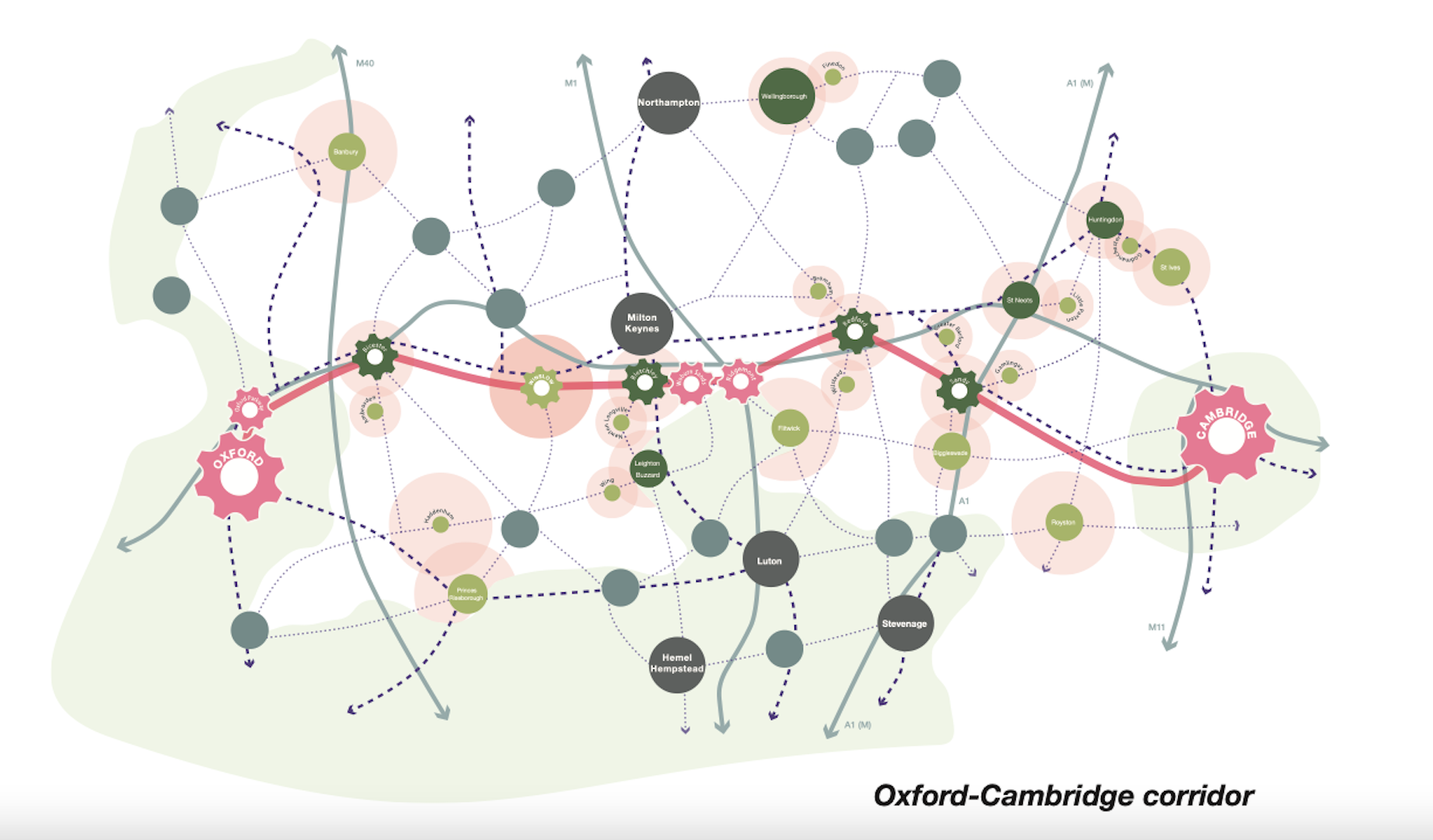 
The VeloCity concept grows existing villages into a cluster with new homes built to a higher density within each village so as to reach an optimum size that supports and brings back the local shop, pubs and schools they have lost. The potential to unlock land for new housing within villages offers a more sustainable alternative which keeps villages distinct and walkable, while protecting the surrounding countryside. However, in order to implement this, planning and transport policies must be turned on their head.


The issue of who owns the land poses further challenges to any large-scale legislative changes needed to develop rural areas differently. Guy Shrubsole, in his book Who owns England, states that today 50% of England is owned by less than 1 % of population and that this is largely made up of wealthy landowners, ‘the aristocracy and landed gentry’. How this land is managed has a huge impact on the affordability of housing, the way we grow our food and how much space we set aside for nature.

Historically the countryside has been a backdrop to conflict and political uprisings —feudalism, class divide, land rights, economic depression and two world wars — which have seen philanthropists, industrialists, idealists, radicals and revolutionaries all experiment with better ways of living in the countryside with utopian visions ranging from new model villages, to farm colonies, to current-day garden villages. These models demonstrate that at specific moments in time visionary thinking can bring about radical changes in the countryside.

A village brings different characteristics to that of a town — compactness, walkablilty and immediate access to the surrounding countryside. However, current village development does not respect this and ad-hoc, low density sprawl with suburban housing typology boosted by the car boom of the 60’s and 70’s, is still happening, eating up too much land and destroying the natural environment.

Historically villages were linked by bridleways and footpaths, but these have become underused and overgrown because of the increasing reliance on the car for providing easy access to facilities in nearby, bigger towns. VeloCity proposes to reinstate these routes as cycling and walking networks to form village clusters that can provide a sufficiently sized population that can support shared services and infrastructures without the need of a car.

Image 4. Current development in rural areas leads to sprawl. VeloCity proposes to keep villages compact and walkable through focusing new development in and around the village core. Source: Author.

Whilst some owners have failed to protect the environment and the interests of the wider community, others have looked to do things differently. The re-wilding scheme at the Knepp Estate in Sussex, and the 2000 acre organic farm at Sheepdrove on the Kindersley Estate in Berkshire, are good examples of this.

One particular example is Blenheim Estate in West Oxfordshire. The VeloCity team was fortunate to be introduced to representatives from the Estate, who own 12,0000 acres of land comprising a stately home, parkland, a working farm and much land within and around several villages on its fringes. As a large landed Estate, a holder of local property and a large employer, they are deeply rooted in the area and recognise their responsibility to those who live and work in and around Blenheim today, but also to those who will follow in future generations. VeloCity’s vision resonated with their rethinking and ambition to create better connected communities, more responsible housing that is less reliant on car use, achieve a low carbon footprint and valuing the land’s natural capital.

VeloCity developed a strategy with Blenheim that takes a more joined up look at the Estate and the villages surrounding them. Having walked and cycled the estate and consulted with several stakeholders, we were able to explore in detail aspects of village life. This built up an initial picture of the various barriers and opportunities facing the area culminating in a sketchbook of ideas and strategies that present a roadmap to build out over a 20-year plan.

The strategy enables the Estate and villages to work and operate together to deliver a thriving cluster of all eight villages with realistic alternatives to movement by the car. Short term initiatives saw bridleways across the estate trialed as new cycle routes during summer 2020, providing more direct connection between villages so that local journeys to school, work, shops and train station are made quicker and safer. These trial routes proved very popular and will now be developed into an integrated network of active travel routes. Cycle and walking routes combined with transport sharing options and local delivery initiatives using electric vehicles will help reduce movements in HGV traffic, promote new community work hubs, deliver alternative approaches to planning and bring forward new approaches to farming practice, food production and land management. This movement network will also unlock opportunities for new affordable housing allocations within villages. 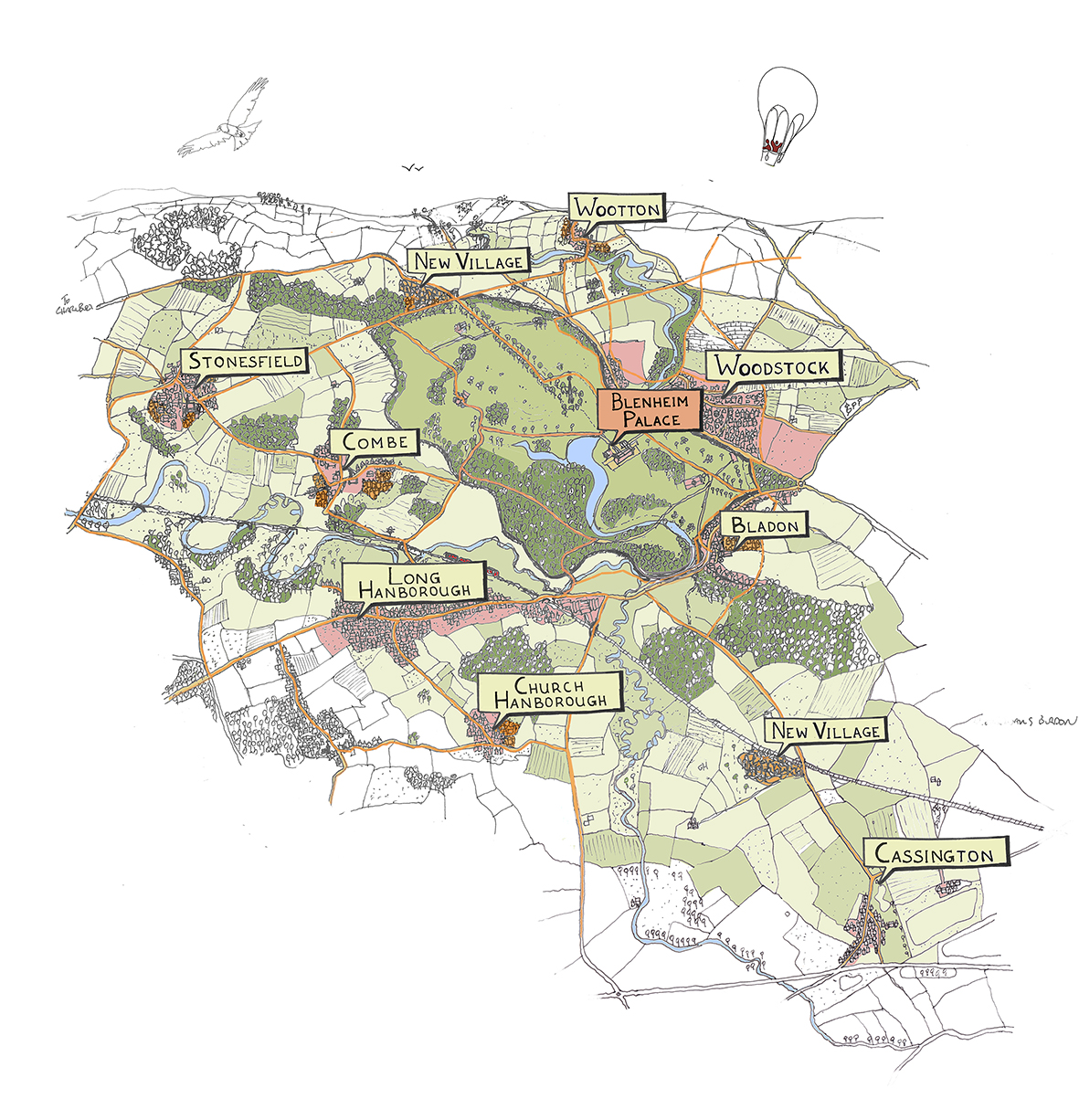 Image 5. The VeloCity strategy for Blenheim connects existing network of villages and unlocks opportunity for new housing, workspaces and communal facilities to complement the ‘Blenheim cluster’. The strategy will help Blenheim meet the Government’s zero carbon target and embrace the principles of a circular economy. Source: Author.

The Covid-19 lockdown has seen a significant decrease in car use and air travel. People are walking and cycling more as part of their daily routine providing huge physical and mental health benefits. Less air and car travel improves air quality – Stanford University has estimated based on two months of measurements from sensors in four Chinese cities during spring 2020 that the reduction in air pollution in China has saved approximately 20 times more lives there than have been lost due to the infection5. That’s an incredible statistic and we can predict we will see many more people wanting to move from cities to the countryside for better air quality. Furthermore, Cycling UK has found that if cycling increased to 25% of annual journeys by 2050, it could yield a cumulative annual benefit of £42bn.

As a result of the Covid pandemic the UK government has made some significant changes to encourage more cycling and walking. During lockdown they introduced a £250million emergency travel fund to encourage people to adopt a more active travel plan – walking and cycling – if they can’t work from home. This has brought forward positive measures for pedestrians and cyclists with pop-up bike lanes, wider pavements and safer junctions. In July a further investment was made with the Government kick starting a £2billion cycling and walking initiative, Gear Change, that sets out a comprehensive, long-term vision to increase active travel.

Many other cities and governments are making ambitious plans to transform the way people move and connect with each other. Paris’ ‘15 Minute City’ is a concept inspired by the work of activist and urban theorist, Jane Jacobs and has been recently championed in Paris by their mayor Anne Hidalgo. It advocates self-supporting neighbourhoods created by people walking and cycling no more than 15 minutes to get to school or work, and addresses both climate change, car pollution and quality of life.

Embedding the benefits of walking and cycling into how we go about our daily lives has got to be a good thing and with the impact of Covid bringing more initiatives forward, it would be good to see these being directed not just to cities but also to the countryside. Covid has shown us that now, more than ever, we are in a place to make this change. We have seen it and dramatically changed our lives. We have also seen that if our governments are so minded, they too can invest in this change.

Petra Marko is a member of the VeloCity team developing a vision that solves some of the most critical issues facing the countryside today. She is an architect and co-founder of Marko&Placemakers, and director of Solidspace. Working between client-side enabling, placemaking and design advocacy, Petra has a growing profile as a younger generation leader breaking industry silos. Petra sat on the inaugural National Infrastructure Commission Young Professionals Panel, the independent body tasked with advising the government on the UK’s long-term infrastructure. She has led placemaking strategies across several London boroughs, and is involved in master planning projects in Central Europe. Alongside practice, Petra is a think tank leader at The London School of Architecture and a regular speaker at forums concerned with livable cities.