This essay refers to street art practices as a creative tool for the critique of the touristification of the city of Venice. In it, we present a project of scattered street art organized by a local collective, whose intent was to highlight the side effects of mass tourism processes: In the Venetian case, these are the indirect expulsion of its citizens and the subsequent decay of the urban and social fabric of the city.

With 30 millions visitors per year, a figure increasing exponentially with each season, and a local population of just 54.000 in the historical core, Venice is to be considered the most touristed city in the world [Image 1]. Since the late 60s there has been a constant decline in the number of residents – approximately 1000 per year. The signs of this drain are visible everywhere in the city: On the one hand, in the reconversion of both public and private spaces for exploitation by the tourist industry in the most central areas and, on the other, the abundance of unused spaces (empty flats, closed shops) in those urban zones less touched by the tourist flow. 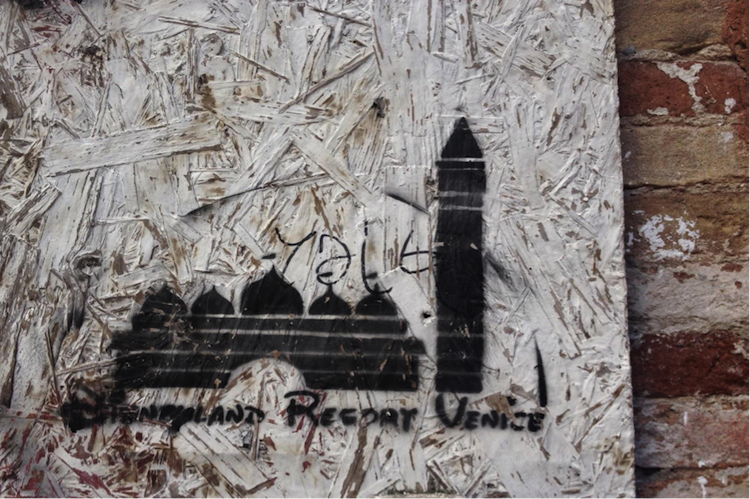 Therefore, in Venice we witness a juxtaposition of hypersaturated and underused spaces. A first attempt to catalogue and quantify the abandoned spaces in the city was made in 2016 by IUAV (Venice University Institute of Architecture), with a research project that showed that Venice has an area of 750.000 square meters of unused built surface. A second survey conducted by the same university in 2017 mapped in detail the commercial activities in town, which outlined that, within the historical area there are 23 grocery stores, 29 small supermarkets, 292 bars, 335 restaurants, 524 clothing stores, 19 bookshops, 280 souvenir shops, 133 jewelers and 96 art shops. Moreover, the investigation highlights that only 437 shops offer services or goods destined for residents, while 1.278 are exclusively address tourists (Pendolini, 2017) [Images 2-3]. 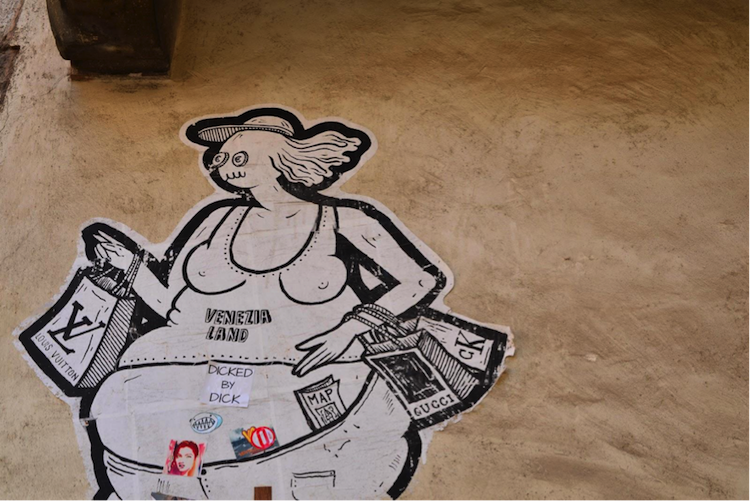 Dissatisfaction with the way local administrators have been managing this issue during the past thirty years at least, has been rising in accordance with the increase of visitors and the decrease of inhabitants. Social protests and demonstrations are occurring more often, denouncing the lack of political will to contain the commodification of the city and the insufficient policies to foster the local community.

The polemic term tourismphobia – that last summer became very fashionable in the press around Southern Europe – has been coined to describe violent reactions against tourists. Although this is not the case here, there is undoubtedly a growing awareness that a drastic change in the local economy is needed in order to prevent Venice from becoming a theme park. Grassroots initiatives have been flourishing in recent times, reaching outstanding degrees of creativity and capacity to activate social capital. 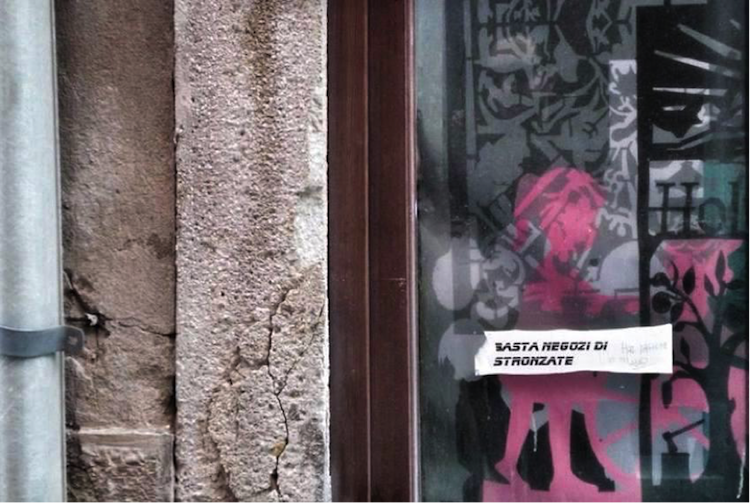 Within this broader framework, during the spring of 2017 the Venetian collective OPA! (Officina di Ricerca e Azione, [Research and Action Workshop]) promoted a street art participatory project aimed at addressing the wider issues of touristification of the city by creating interventions on the shutters of those shops that closed down a long time ago. The concept was to temporarily brighten up these closed and impermeable spaces within the urban landscape once more, reminding us that a once lively local community is being driven out. An open invitation called on Venetian and non-Venetian artists to revive the shutters of those unused shops, which were previously mapped and selected by OPA! members, along a trajectory that runs across the whole city [Image 4]. 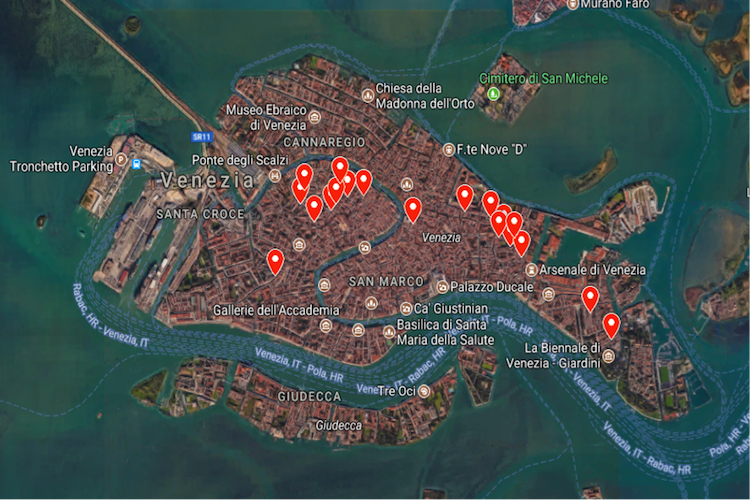 The two main guidelines in the brief for this open call were: avoid any nostalgia for the past, and don’t blame the tourists as individuals (given that we are all tourists at a certain point of our lives). The work of twenty-three artists was produced in poster format and applied to the pre-selected shutters during a one-night operation carried out by three teams of volunteers. Every single intervention was documented and printed, in order to be showcased at a photographic exhibition that took place after the overnight operation in the city [Images 5-12]. 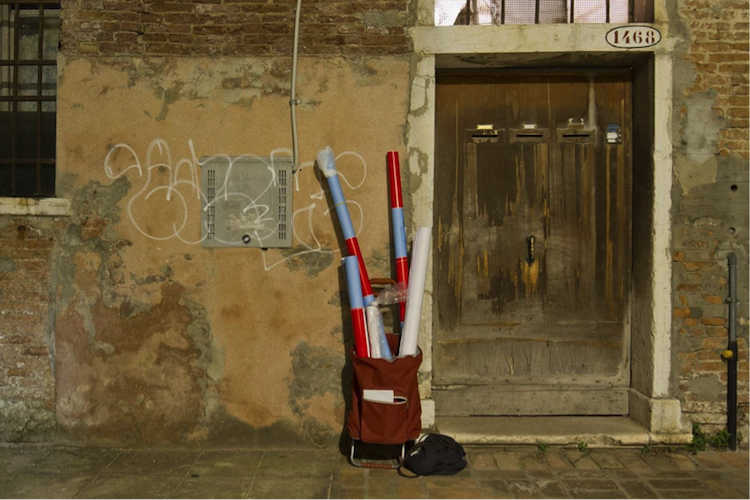 5. Detail of the action during the night.
Photograph: Giorgio Schirato, May 2017. 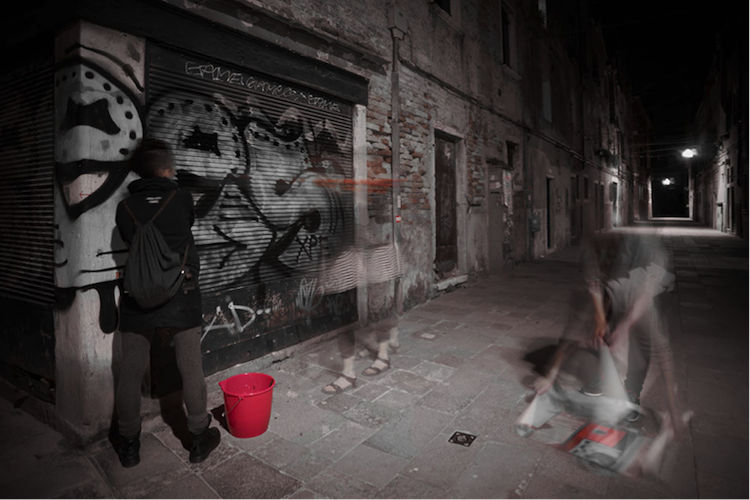 6. Another detail of the action during the night. Photograph: Nataša Radović, May 2017. 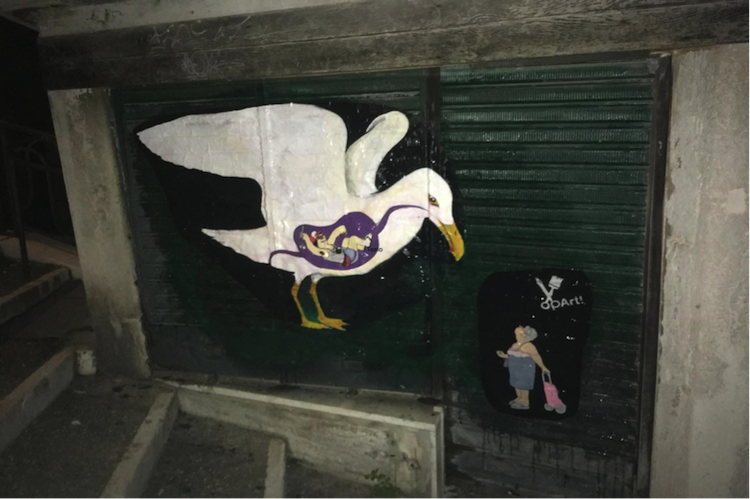 7. The seagull and the old lady. Photograph: Caterina Borelli, May 2017. 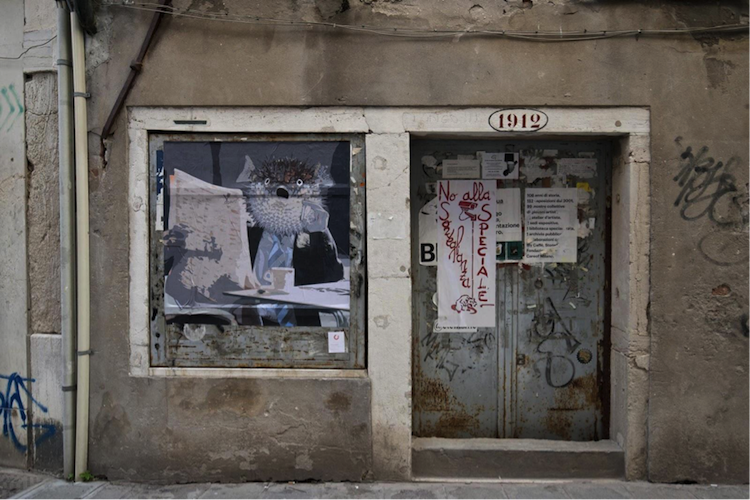 8. Blowfish reading the newspaper in a fictional future. Photograph: Giorgio Schirato, May 2017. 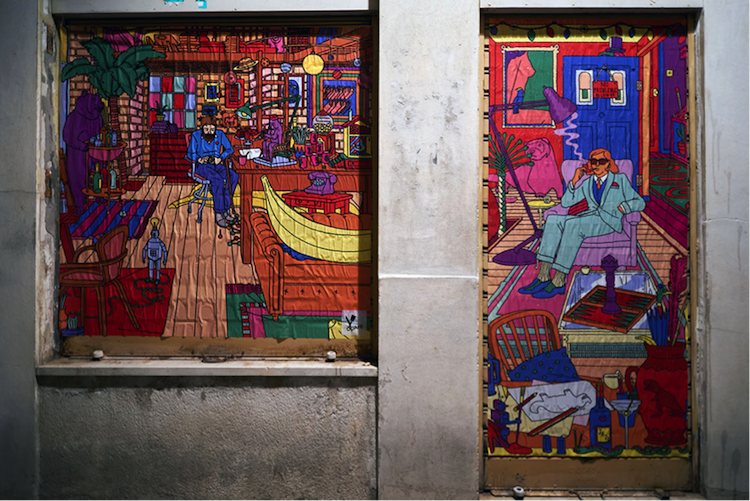 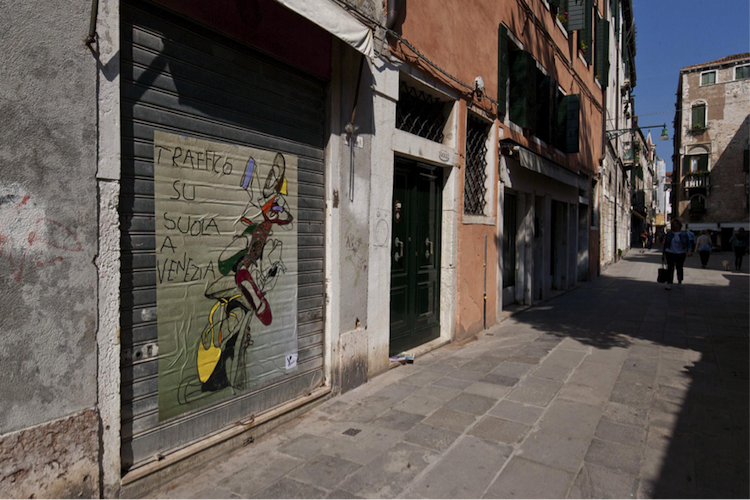 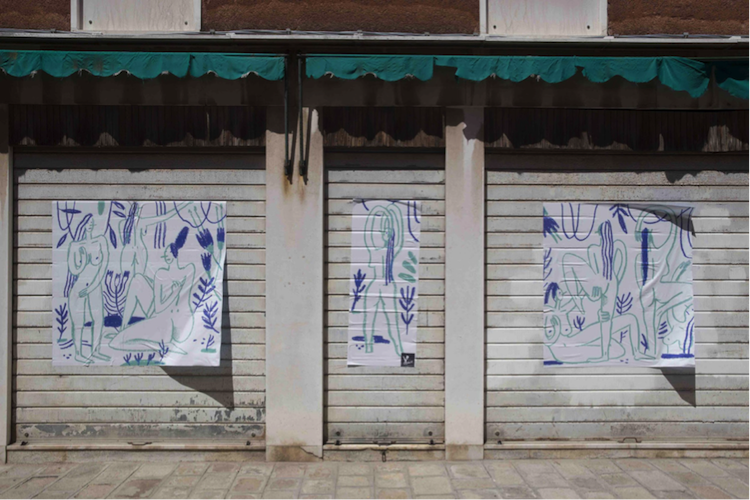 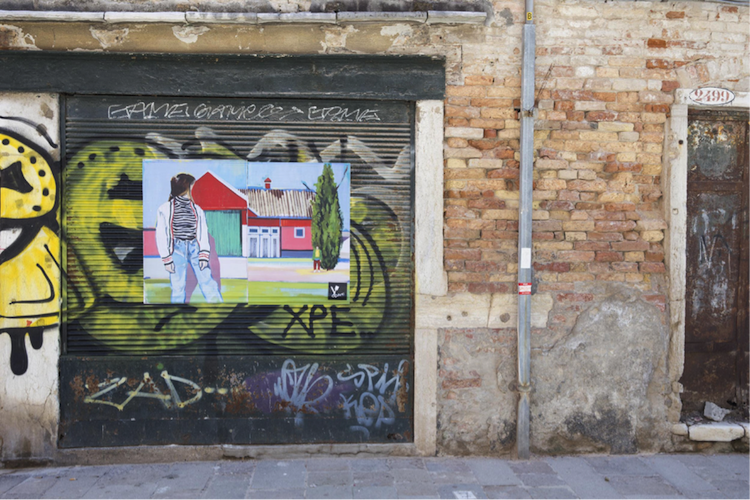 To conclude, the presented work directs itself towards a critical process, with the aim to tackle, in a creative way, the problems and urgent issues that many urban spaces in our cultural capitals face as a consequence of touristification and commodification. The relevance of this action of artistic activism (or artivism) is not to be found in the content of the images, rather, in the effect the mere presence of the posters generated in the specific sites where they have been hung, i.e. on the shutters of unused shops. The whole aim was to point out the extreme specificity of the Venetian case: A city that is suffering a constant urban emptying process that these actions sought to denounce.

OPA!’s core team is formed by Caterina Borelli, Elisa Bruttomesso and Maria Fiano. OPA! is an independent urban laboratory that uses the research not only as a basis for knowledge production but also as a structuring thought for actions in the local context. We draw upon different disciplines, primarily anthropology, geography and history.

Notes
On to Volume 2
Preface

Articles
What begins at the end of urban tourism, as we know it?
– Christoph Sommer

Articles
Complexity-cage: toward a critical deconstruction of “tourism-phobia”
– Clara Zanardi

Activism and Community Initiatives
Sticking around: poster art as activism in Venice
– OPA!