Is loneliness the price to pay for living in a global city? There is a commonplace about the easiness of feeling isolated in urban environments that comes from a true fact: physical proximity is not enough to create meaningful connections among people. Through the life trajectories of five artists, The Lonely City shows that the urban realm can indeed be a place of anonymity and isolation, but at the same time that loneliness is a city by itself, it’s crowded, and it’s a collective experience.

The book starts off with the personal experience of the author Olivia Laing, a British writer, critic, and novelist. Laing found herself to be a citizen of the lonely city when moving to New York after a breakup. As a means of going through the process of being alone in an overwhelming urban landscape, Laing rather devolves into exploring loneliness from the point of view of artists who made their fame (or the lack of it) tied to their city while suffering isolation and marginalization.

The first images of loneliness brought to the reader come from the art of Edward Hopper. Paintings such as Night Windows and Nighthawks communicate the simultaneous feelings of separation-and-exposure, which are characteristics of modern American life. “Even indoors you are at the mercy of a stranger’s gaze”. The alluring experience of urban life diverts into an experience of isolation, where the lack of intimacy and human contact are unbearable. 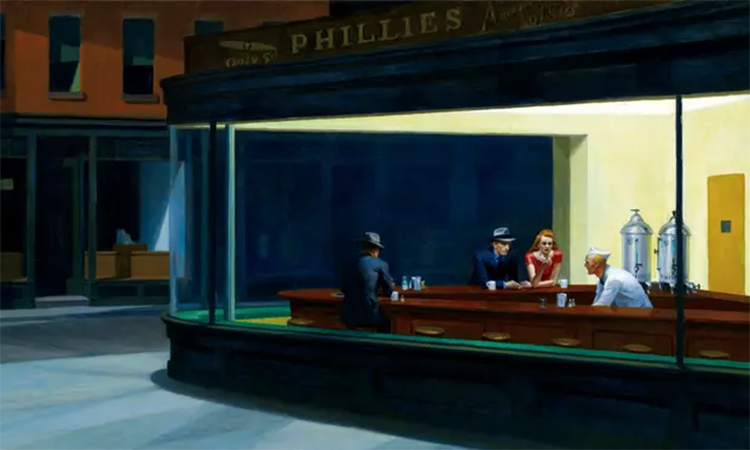 Laing believes that art is a tool to negotiate the separation-and-exposure typical of the lonely cities. In art she sees the opportunity to create a contact, a way to change the landscape of emotions by making something concrete of a feeling so painfully ambiguous. While for Edward Hopper loneliness was something exposed, for Andy Warhol the shame of being seen drives the need to conform. In his art he celebrated the ordinary existence of familiar and popular objects, the glamour of alikeness that “protects against rejection and dismissal”. For an immigrant like him, the loneliness that came from being different could only be endured by blending into the popular culture with his art, and yet being left with an empty emotional space that Warhol learned to fill up with the use of technology. The mediating capacity of the machines he would surround himself with served as surrogate for real contact with people. The promise to bring connection is still real in our own days of pervasive virtual experiences, while doubts arise whether we are, instead, getting lonelier and more detached from one another. 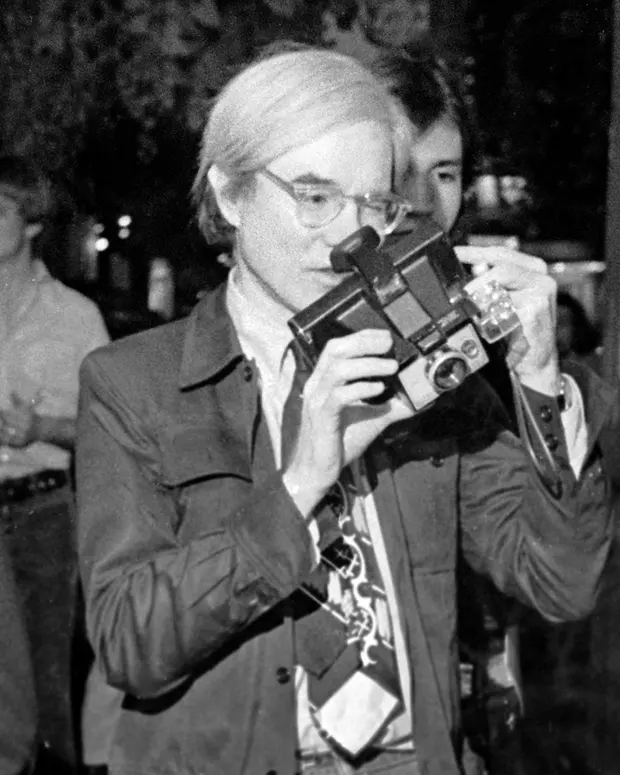 Loneliness takes a toll on personal mental health and translates into the progressive withdrawal of individuals from society. Yet by investigating the collective dimension of this phenomenon, Laing points out the structural, social forces that produce isolation in cities, namely the role that institutions like families, schools and governments play in maintaining the separation between damaged individuals and the healthy society. Henry Darger represents the case of an artist whose internal, vivid imagination resisted a lifelong reality lived out of family care and formal education. In his posthumously found writings, Darger aimed for the right “to play, to be happy, and to dream, the right to normal sleep of the night’s season, the right to an education, that we may have an equality of opportunity for developing all that are in us of mind and heart”. Although he lived his childhood in the beginning of the XXth century, a period where minimising physical contact was deemed to improve life chances in institutions like hospitals and orphanages, what stays relevant today is the agency of class and power in perpetuating the exclusion of the marginalized. Our capitalist society often deprives urban realms of spaces for community and openness by pursuing a privileged logic of safety and happiness that pushes unwanted people at the margins.

Detail from The Realms of the Unreal by Henry Darger

As discussed by the author with the great cleanup of New York City in the 2000s, the risk is that a gentrification of the city corresponds to a gentrification of the emotions. Homogenizing parts of the city that used to favor cross-class and cross-racial contact contributes to setting imaginary borders for people that don’t fit in standard. Through the life of David Wojnarowicz, Laing emphasizes how diverse and queer spaces can effectively reduce loneliness by providing free and creative contacts. Surviving into an antagonistic society meant for Wojnarowicz to fight alienation by seeking contacts at the margins of the city, mixing art media, performance and activism. 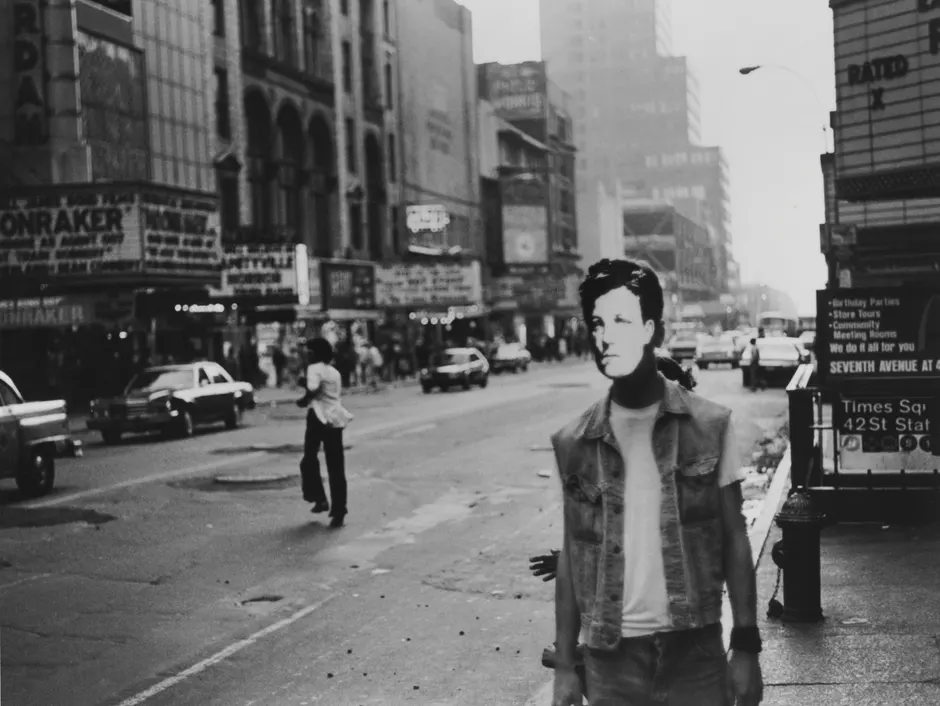 Reading The Lonely City in 2021 after having gone through an almost globally shared experience of isolation gives the book a poignant relevance. Before, we might have held back from admitting the feeling of loneliness out of shame, while now it has become common that loneliness is ever present, we know it’s a collective experience, although those who are most marginalized in society are the ones who suffer the most.

Throughout the book, the words solitude and loneliness are used interchangeably with the same meaning: a forced experience of being alone, being ostracized or left out. Just as Laing uses different words to refer to the same emotion, she does not explicitly differentiate between different degrees of loneliness either. They seem to be all brushed by the same stroke of experience, that of white men living in a US metropolis. Only two women appear, Valerie Solanas and Zoe Leonard, because of their relations with the lives of the male artists presented. Except from the very beginning, even the author’s personal experience is not thread into the narrative that much. Albeit a deliberate choice, this is also a missed opportunity. Her female voice could have been used to bolster other female voices, other facets of loneliness in the urban realm.

Nevertheless, The Lonely City is a recommended read for those seeking to understand more the emotion that is so present in the cities we inhabit. Laing warns us from the tendency of dismissing undesirable feelings as individual problems, as opposed to responding to structural injustices. As the philosopher Zygmunt Bauman describes in his book Liquid Life, the “society of individuals” makes us forget the true meaning of “individual” that is the smallest, indivisible entity of society, a part that only makes sense when contributing to the whole. The Lonely City is a call to renew this much needed sense of community by looking at the experience of isolation through the lenses of collectivity and solidarity.


+
The Lonely City: Adventures in the Art of Being Alone (2016) by Olivia Laing is published by Picador

Francesca Cocchiara is an architect from Cagliari, Italy. She graduated in Architecture at the University of Cagliari in 2011 and obtained a Master of Science in Human Settlements at the KU Leuven, Belgium, in 2014. Having lived and worked in many international cities, she developed a strong interest in how people shape their own environment and vice versa. She has been living in Athens since 2019, working as a freelance architect on environmentally sustainable designs and collaborating with the office LandmArch on landscape and urban projects. She is also an educator at the Arkki School of Architecture for Children and Youth in Athens.

Nicole de Groot studied in Amsterdam where she explored the interplay of space and place as a framework to conceptualize the university campus as a city. In her Master in Urban Studies she researched experiences on modes of transport in Paris and Amsterdam and the role of belonging afforded by these. Nicole was visiting researcher for the NGO Corpovisionarios of Antanas Mockus working on participatory interventions to dignify the role of trash collectors in the city as part of a collaboration with the municiplaity aiming to reduce waste in the city. Nicole is based in Amsterdam.

Articles
Emotions and Frustrations: An Analysis of the Failure of a Democratic Participative Process
Tanika Join and Lise Serra

Articles
(Unwanted) Emotions As Vital for the Collective Production of the City: The Case of Park Am Gleisdreieck in Berlin, Germany
Flavia Alice Mameli

Drawing Photography and Creative Media
Back to the Future of Public Space: Postcards From 2020
Dorotea Ottaviani and Cecilia De Marinis

Book Reviews
The Lonely City: Adventures in the Art of Being Alone, by Olivia Laing
Francesca Cocchiara and Nicole de Groot

Notes
Empowering the City-Zen: Which Politics for Which Polis?
Call for Submissions
Closing 31 March 2023