Urban societies are increasingly complex global entities. According to Henri Lefebvre, such complexification can be roughly defined in spatial terms as the complexification of the relation between space and the objects that occupy space, produced by complexification of the human activities that occur over time. These activities are erratic spatial practices that continually deconstruct and reconstruct the arrangement of objects and space. Initially, space is an absolute system that tends towards an apparent homogeneity imposed by the unified strategies and systemized logics of the global urbanization, but afterwards it becomes differentiated because of the interference of networks and relationships created by the population that inhabits it. In the same way, existing objects are filled with new functions that each time update the relation between form and content producing differentiations over time. Hence, Lefebvre suggests that a total reading of the urban society is grounded on the continuous process of assembling elements into new and different organizational forms (Lefebvre, 2003, pp. 46-51). The urban society, as Andy Merrifield points out, is not embedded into fixed and inanimate urban forms bounded to a particular place, but it is determined by the ever-changing dynamics of the human reality (Merrifield, 2014, pp. 6-7). Therefore, urban forms can be thought like entities that continually reshape the relations between objects, space and human actions.

This complexity can be represented with the idea of the palimpsest. David Harvey (2014) uses the palimpsest to illustrate the results of the processes of urbanization that characterize a city with the co-existence of many layers originated at different times and superimposed, one upon the other. The layers that build the palimpsest take into account both the history of a place in its consecutive settings and manifestations, and all the changes provoked by the most recent urban transformations. They are physical, because they display a mosaic of concrete fragments embedded inside the urban fabric, but also immaterial, because they encounter all the social processes that produce space. Because of the immaterial consistency of most of these layers, conventional methods of investigations of spatial forms are not suitable to display an exhaustive knowledge of the palimpsest. Hence, Harvey notes that to grasp a comprehensive thought about urban societies, it is necessary to turn the object of the research primarily to the analysis of social processes and how they affect the concrete environment (Harvey, 2014, pp. 61-62).

This shift from the focus on the container towards the content has been already engaged by many scholars like Stan Allen (1999), James Corner (1999), David Leatherbarrow (2009) and others. They register a deviation from the figural, typological, or iconic representation of the object towards a thorough re-definition of the notion of context as ‘field’. An urban ‘field’ can be described as the extended and all-embracing environment that combines all the actual forces and conditions at play in a specific context together with the processes that have generated them (Allen, 1999; Ewing, 2011). Furthermore, Stan Allen (1999) points out that the urban ‘field’ presents unexpected conditions, changes, accidents, and improvisations that are difficult to predict and to detect. The ‘uncertainty of the real’ performs a primary role in the definition of the three-dimensional field of the contemporary city as a non-hierarchical composition.

Because the urban fabric has a concrete and immaterial characters that co-exist at the same time, an appropriate methodology of analysis of the urban society should recognize the multiple relations and the frictions between the physical configuration of the city and the fluctuant form of the human experience. Ignasi de Solà-Morales (1996, pp. 21-22), citing “The Phenomenology of Perception” by the French philosopher Merleau-Ponty, points out that topography is a representation method that includes both the visual dimension of the city embedded in the outer shape of buildings, and the idea of experience entrenched in the structure of behavior that shapes processes and networks. Solà-Morales makes clear that it is possible to detect multiple topographies that are overlapped at the same time in order to represent a more accurate and complex reading of the reality. The geographer Cindi Katz points out that the topographic analysis can also offer alternative readings of the reality because it may reveal social and political inequalities. The methodology proposed by Katz, named ‘counter-topographies’, is based on the comparison of distant places across geographical borders making use of contour-lines, that in topography are the lines of constant elevation that define the three-dimensional shape of the ground by connecting points placed at the same altitude. Katz’s applies the contour-lines as an analytical recognition of comparable specific practices or processes between distant places to reveal differences and similarities at the global scale. The use of ‘counter-topographies’ entails the material and immaterial aspect of the built environment because they build a landscape composed by the intersection of layers of production with material social practices (Katz, 2001, p. 1228-1229). Solà-Morales’s topographical analysis of material and immaterial layers, together with the use of Katz’s contour-lines to compare distant places provide a methodology able to analyze the global urban environment based on a mix of phenomenological and scientific recognition of the reality.

This topographical analysis can be conducted with the use of the urban cross-section because it is a tool that presents the urban fabric like a vertically stratified structure placed over the line of the ground. A cross-section like this was used, for example, by Alison and Peter Smithson to illustrate the relationship that exists between various kinds of human aggregation and the processes of urbanization that sustained the growth of the city in relation to a specific topographical environment (Smithson, 1967, pp. 20-21). The cross-section thus looks like a pure topographical representation made up of contour-lines that unifies the ground, on which the city was founded, and the city skyline, to reveal the content of the urban form. 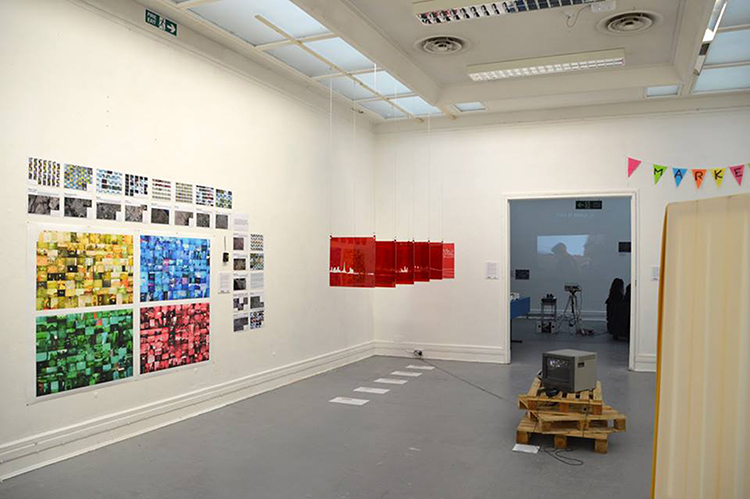 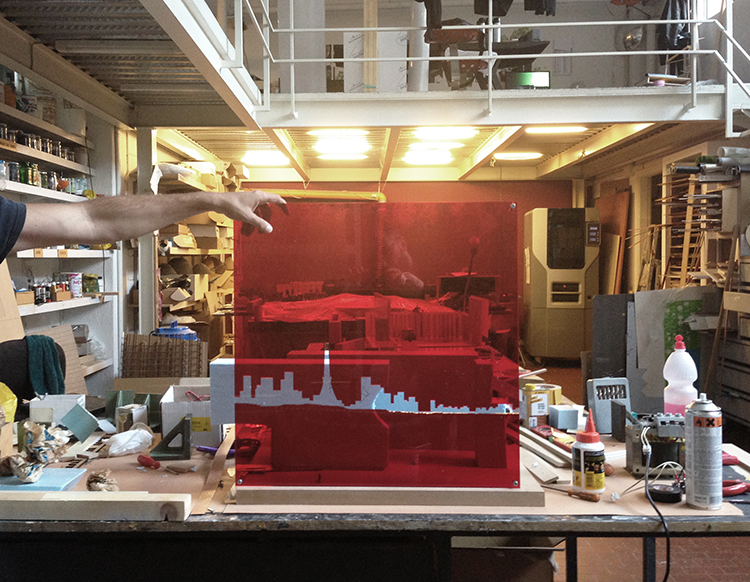 The installation with the title ‘The Thick Topography’, presented at the exhibition ‘Cities Methodologies 2014’ at the Urban Lab of the UCL in London, aimed at tackling the issue of the city as a global entity [Image 1.]. The methodology of the topographical analysis, using the tool of the cross-section, was applied to analyze and compare six cities: Athens, Beirut, Hong Kong, New York, Rome, and Tokyo. The installation consisted of six transparent panels (60×60 cm) made of red Plexiglas1, and each panel presented a cross-section of a city taken in a significant area to show the relationship between the typicality of the natural soil and the particular features of the built-up city [Image 2.]. The selected areas were: the central area of Wan Chai in Hong Kong; the Flaminio-Parioli district in Rome; the Monasitraki-Psyrri neighborhoods in Athens; the area of Tokyo Tower in Miita; Central Park in New York; the neighborhoods of Mar Mikhail and Ashrafieh in Beirut [Image 3.]. The panels were hung from the roof [Image 4.], and each mounted at a distance of one metre from the next, to allow the passage of the body between them. On the floor data on population, density, geological consistency, and buildings height was displayed for each cross-section [Image 5.]. The scope of the installation was to compare the urban morphologies of the six cities, represented with their urban cross-sections, with data related to the process of their growth. 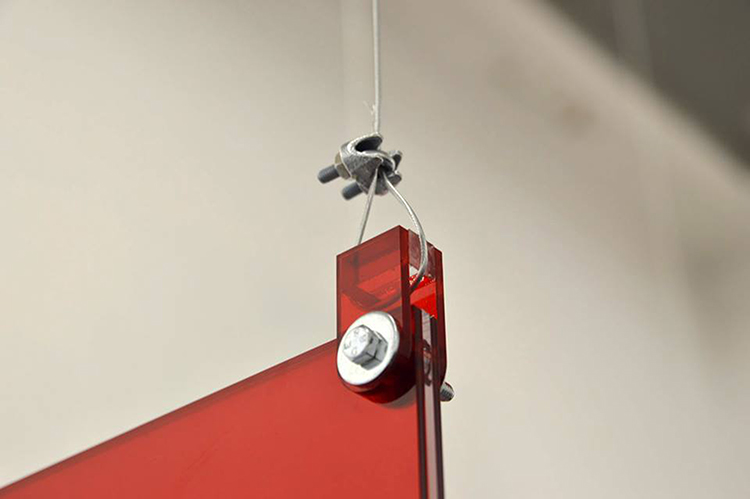 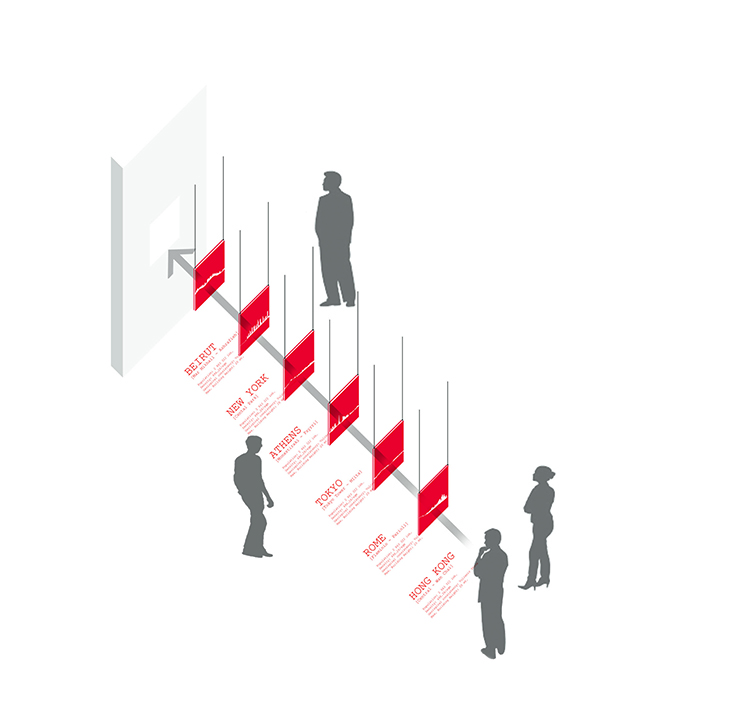 The installation aimed at presenting the physical and the immaterial consistencies of the city theorized by Harvey. On the one hand, the city was described as a concrete spatial construction within the continuity of the ground line with the urban skyline. On the other hand, the six cross-sections described different patterns of dwelling represented in how the city sits on the ground and in the actual height and width of the buildings’ typologies. Based on these considerations, the installation advanced a further interpretation of the cities as global entities. The overlapping of the six cross-sections, and the combination of fragments of a city with the fragments of another one, designs a new global city characterized by hybrid forms of living produced by processes of de-territorialization and consequent adaptation [Image 6., 7., 8.]. Considering the movement of the population that globalization, wars, migrations, and economic crises have caused, cities change day after day and become places of transitions and diversity [Image 9.]. New urban patterns are thus continually shaped inside the cross-sections of cities by the combination of diverse human habits that continually rewrite the city from within. 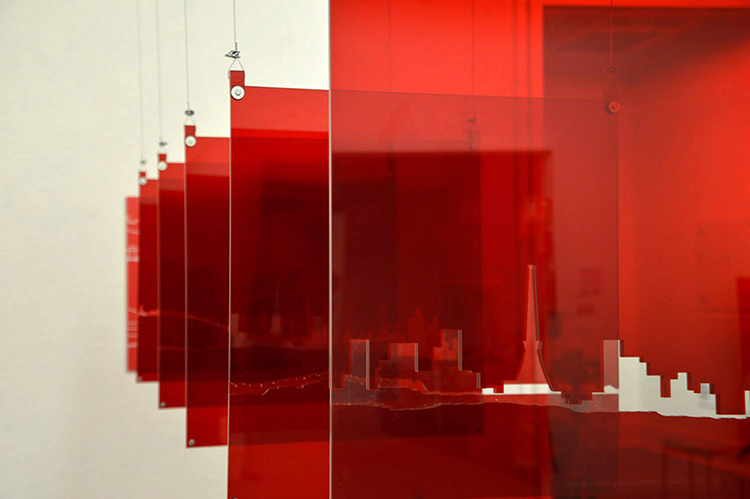 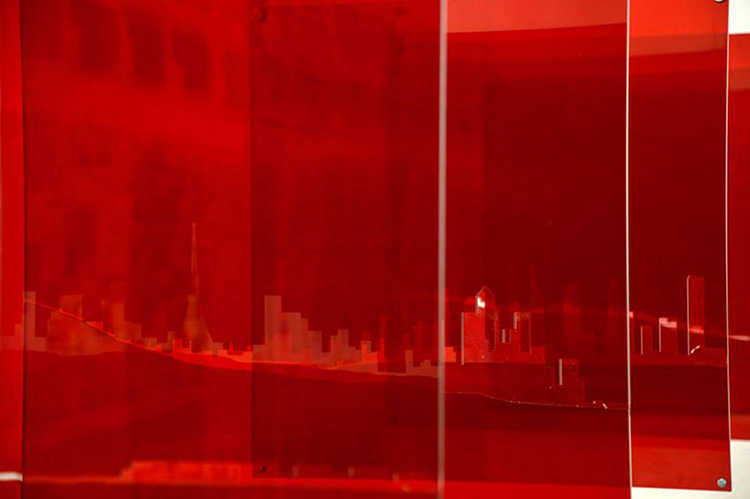 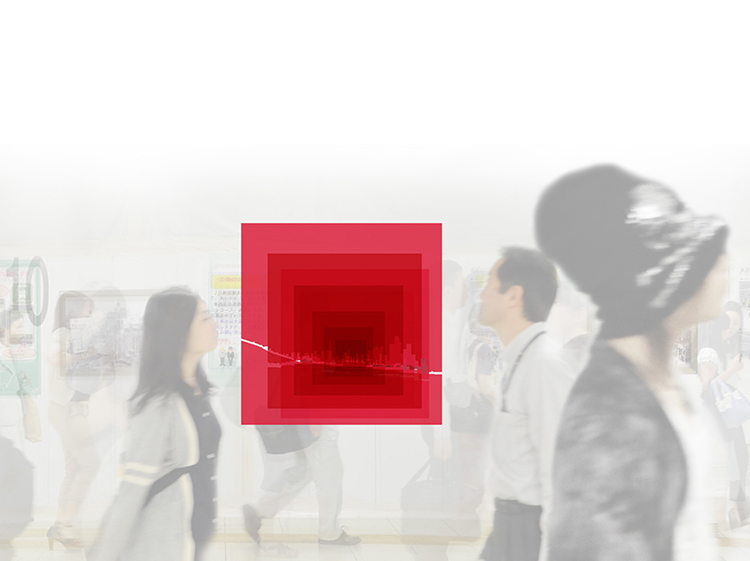 Cristiano Lippa is an architect based in Rome, specialized in urban studies and the design of public spaces. He has spent almost a decade in Japan and from 2008 to 2014 at the University of Tokyo as a visiting researcher at the Kengo Kuma Laboratory. Together Rita Elvira Adamo and Federico Scaroni he has been curator of the exhibition “Invisible Architecture. Italian and Japanese Architectural Movements in the 1960s and in the 1970s and the Contemporary Debate” held in Rome in 2017.

Fabiano Micocci graduated from the University of Roma Tre in 2002 where he also specialized in ‘History of the Design Process’ (2003). He obtained his PhD in Architecture and Urban Design from the University of Florence (2010). Ηe currently teaches at the University of Thessaly. Previously he taught in Greece, Italy and Lebanon and participated as visiting professor and tutor in many international workshops and summer schools. He is the author of the book “Zissis Kotionis. The Architecture of Becoming” (Libria, 2020).

Articles
Poli-Plex-Icon: A tool for city image visualization in the age of complexity
– Efrossyni Tsakiri