The current text briefly presents an urban design proposal submitted in January 2017 to the “Panhellenic Architectural Competition” on the regeneration of the 640-acre former port-industrial area of Drapetsona’s “Fertilisers”, for which it was awarded 3rd Prize.

The specific area is undoubtedly of great significance both due to its location (on the southwestern tip of the Attica basin – entrance to the port of Piraeus), but also to its historical and ideological importance as a general reference for the industrial history of Greece, especially for the working class. The geographical and historical attributes of the region lend it a particular character, which makes it a field of ​​long-standing socio-political claims (of various ideological nuances) and, consequently, an object of (not only) academic studies and design proposals.

The general goal of this competition was the transformation of the area into an extensive metropolitan green park, able to become an intensely active part of the city’s public/common space – a hub of attraction – foremostly for the local communities, but also extendable to a hyper-local or even international scale. The specific design goals included environmental-bioclimatic rehabilitation, the functional enrichment, restoration and reuse of the existing (ex-industrial) building facilities, along with the aesthetic upgrading and the financial sustainability of the area. This should be accomplished through mild, economically and technically affordable interventions, using contemporary ecological materials of low construction and maintenance requirements (low contained energy).


Basic points of the proposal

In that context, our design proposal aspires to place itself in the wider field of Political Ecology. Thus, it sets forth based on a core idea which is best described by the concept of “Ecosophy” (ecological philosophy), as defined by the French philosopher Félix Guattari to be “an ethical-political articulation of Environmental, Social and Mental Ecology”1.

On that ground, apart from the attribution of all places and functions relative to a green park (plantations and structures for leisure, recreation, entertainment, education, culture, sports, commerce, etc.), at first we seek to set up an example of integrated ecological management of the wider urban ecosystem. This is achieved through the application of systems for: a) fresh water retention, recycling and production out of natural desalination of the sea water [Image 5]; and b) electric power production from renewable resources, namely solar, wind, geothermal, tidal and human [Image 7], aiming for complete water and energy self-sufficiency.

Additionally, in order to develop broader operational links with the whole city and to further highlight the historical and ideological significance of the area (beyond the logic of traditional museums), we propose a functional expansion of the park through the inclusion of a directly productive dimension. Such a dimension could be perceived as “industrial”, in the sense of systematization and a relatively large-scale. However, attempts must be supported by radically different ecological practices, able to annihilate the negative environmental and social impacts of traditional industrial production (air-soil-noise pollution, bad odours, high demands in human labour, etc.), while providing a privileged field for relevant educational applications.

To this end, we focus on agricultural production through the pilot application of Permaculture’s principles in Landscape Design, supported by special Aquaponic Irrigation systems. Accordingly, we aim to provide extended areas for cultivation, either open-air or in geothermal greenhouses, suitable for the development of mixed food-forest-gardens, through multiple guilds of fruit trees, vegetables and botanical-aromatic plant species (bushes, herbs, crops, ground cover, etc.) [Image 4]. All edible products can be offered for immediate consumption in the refreshment rooms and the restaurant of the park, along with the possibility of being sold at a public market, which is also provided in the park [Image 2].

In the same sense, we propose the retention, restoration and reuse of some of the old industrial facilities with new productive procedures-functions, in the general direction of the ecological management of urban waste, organic and inorganic [Image 6]. A rather obvious (and probably the most appropriate) proposal for productive reuse of a former chemical fertilizer plant focuses on the pilot implementation of a Natural Fertilizer Production Process, through modern ecological practices for the collection, sorting and composting of organic wastes, potentially derived from the whole city ​​(houses, restaurants, hotels etc.). Especially for this purpose, we propose the reuse of the characteristic cylindrical tanks. Natural fertilizers can be used for the natural enrichment of the park’s soil (with strong benefits for the health of the plant life and the quality of the consumable products), while supplying any surplus to interested parties. Also, it is possible to manage organic matter for the production of natural detergents, perfumes, cosmetics, clothing, etc.

In the same vein, the collection, sorting and processing of inorganic waste is planned for the production of building and construction materials. To this end, we propose the maintenance and restoration of the “AGET-IRAKLIS” facilities complex and their reuse as a Living Fab-Lab (Fabrication Laboratory), suitable for the processing of wood, metal, glass, plastic, ceramics, textiles and so on. Ideally, the Lab can be equipped with CNC and 3D printing technologies, supported by Open Source software.

On the side, it is worth mentioning our attempt to introduce a complex method of “smart” eco-mobility through special, pedal powered mobile benches that can turn into cable cars, following a network of linear aerial routes. The pylons – nodes of the whole structure (along with the special lamp posts of the park) – are designed to function also as rainwater collectors, bearing vertical (double-spiral) wind turbines and PV cells [Image 9].

Last but not least, it is worth noting our intention to enhance the park’s functions by various playful activities, both entertaining and educational. In particular, we attempt to connect the multiple functional units to a narrative plot for a puzzle-based quest-exploration game. We believe that such a collaborative multiplayer game could best stimulate people of all ages and induce them to carry out various engaging challenges, both physical and mental, based on the park’s main functional needs (e.g. water and energy management, agricultural practices, product transfer and disposal) in ways that could notably contribute to their best understanding and actual functional amplification.

The game can also support the Interactive Museum of the Intervention Area, which can be organized within some of the existing preserved constructions after appropriate restoration interventions, namely the glassworks, the “Electricity” (the abandoned power station), the chimney, part of the Silo building and the southern unit of old cylindrical reservoirs. The central theme of the museum will focus on the historical development of the Area, with a parallel-counterpoint emphasis on the former industrial facilities and the modern functions of the park. Especially in regards to the glassworks building, the logic of the museum is proposed to be organized in a non-linear way, on the basis of a rectangular “labyrinth” arrangement, made of glass panels of different sizes, shapes, colours and opacity (as a reference to its old use).This, along with interesting lightings, projections and digital media visualizations, should be able to deliver many interactive elements and an attractive general atmosphere [Image 10]. 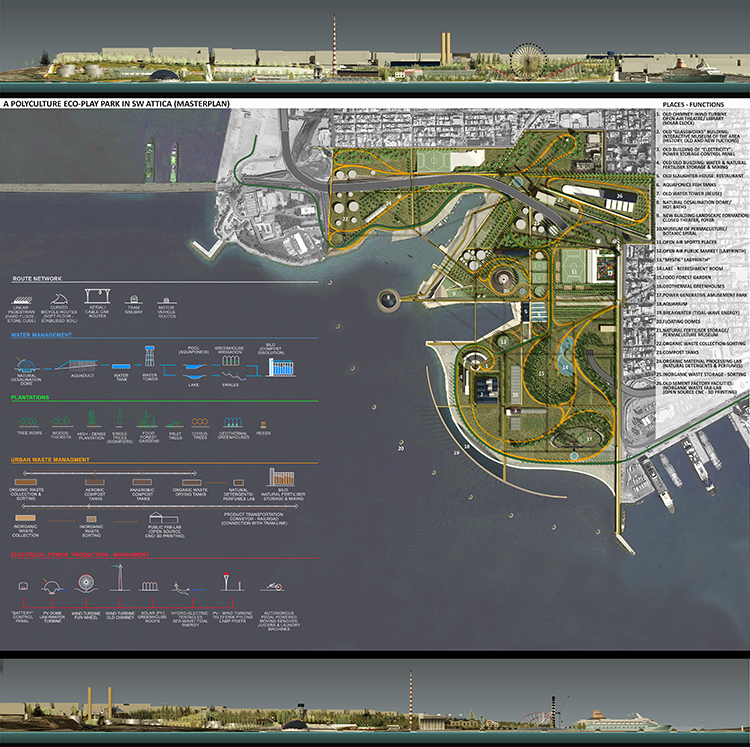 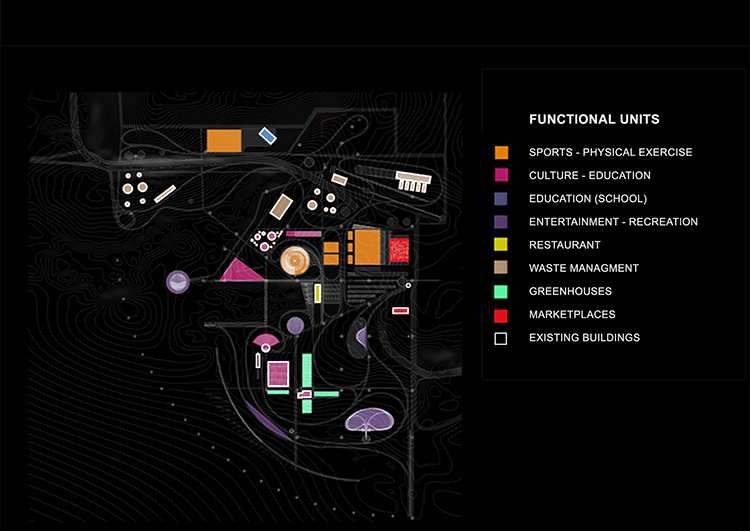 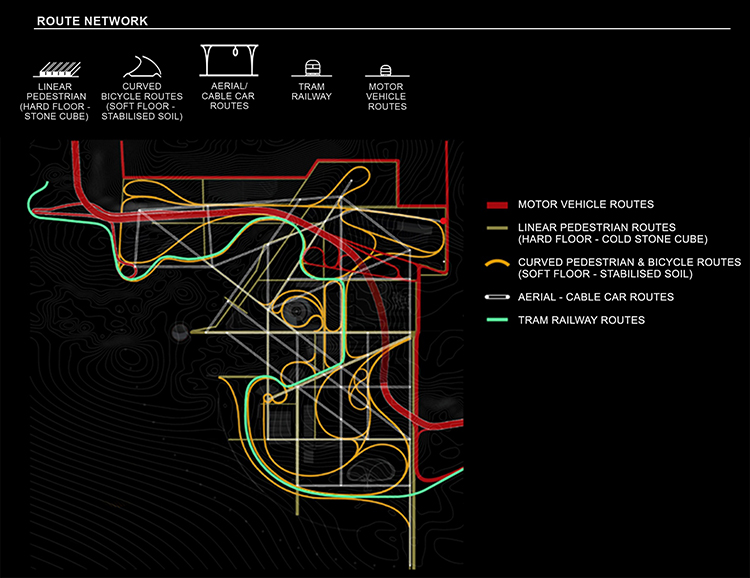 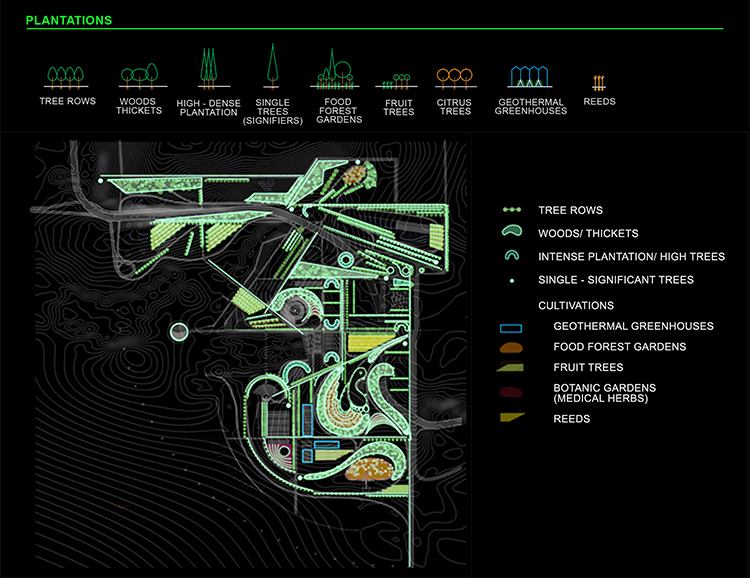 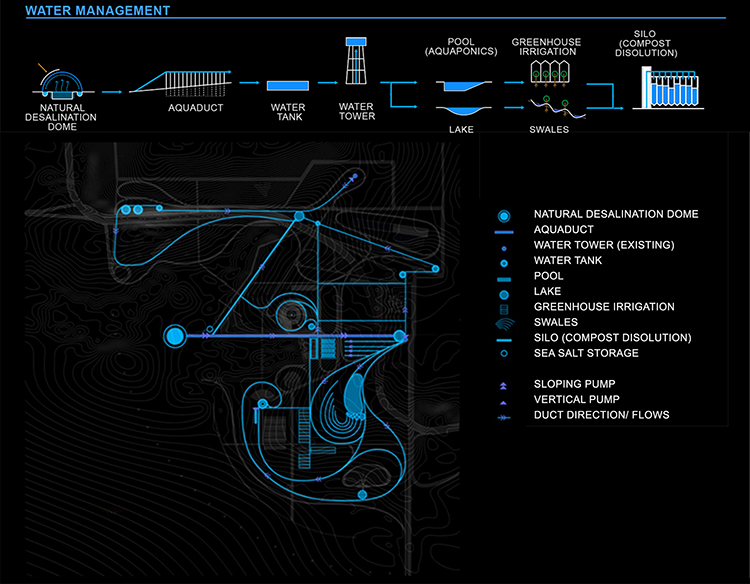 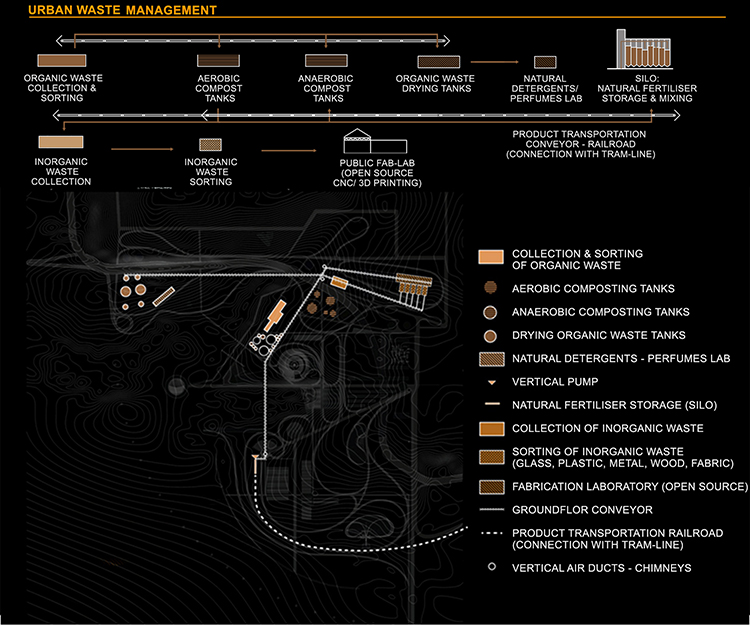 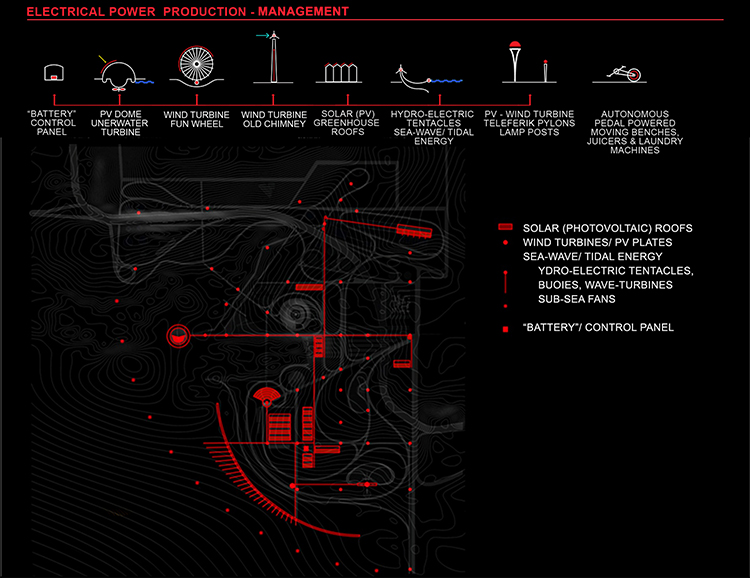 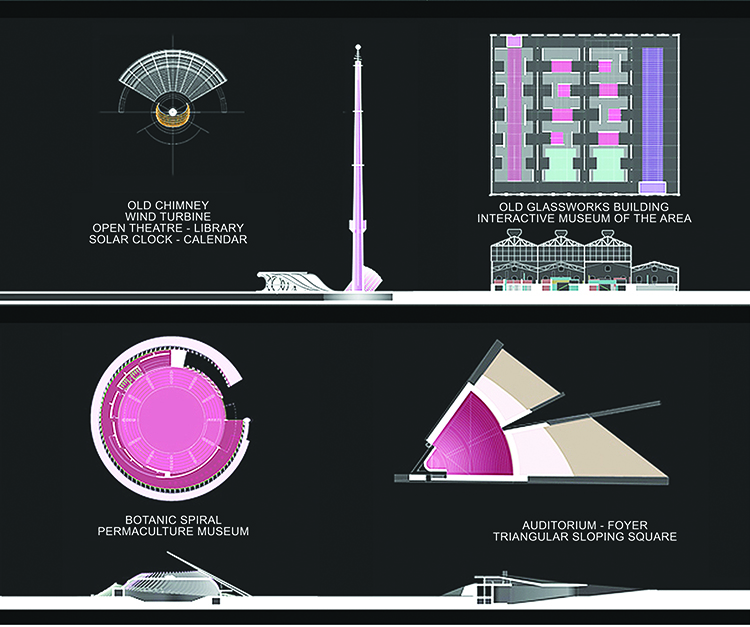 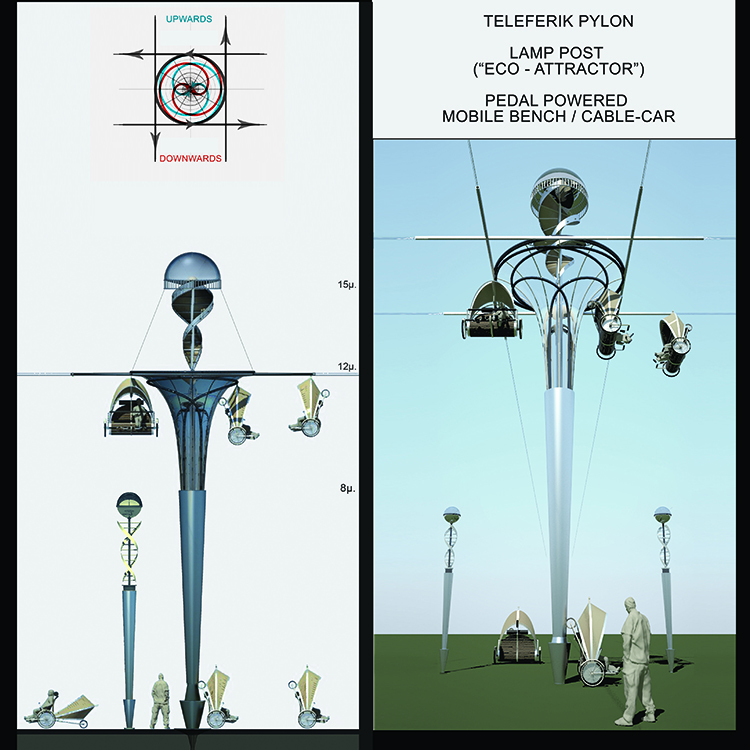 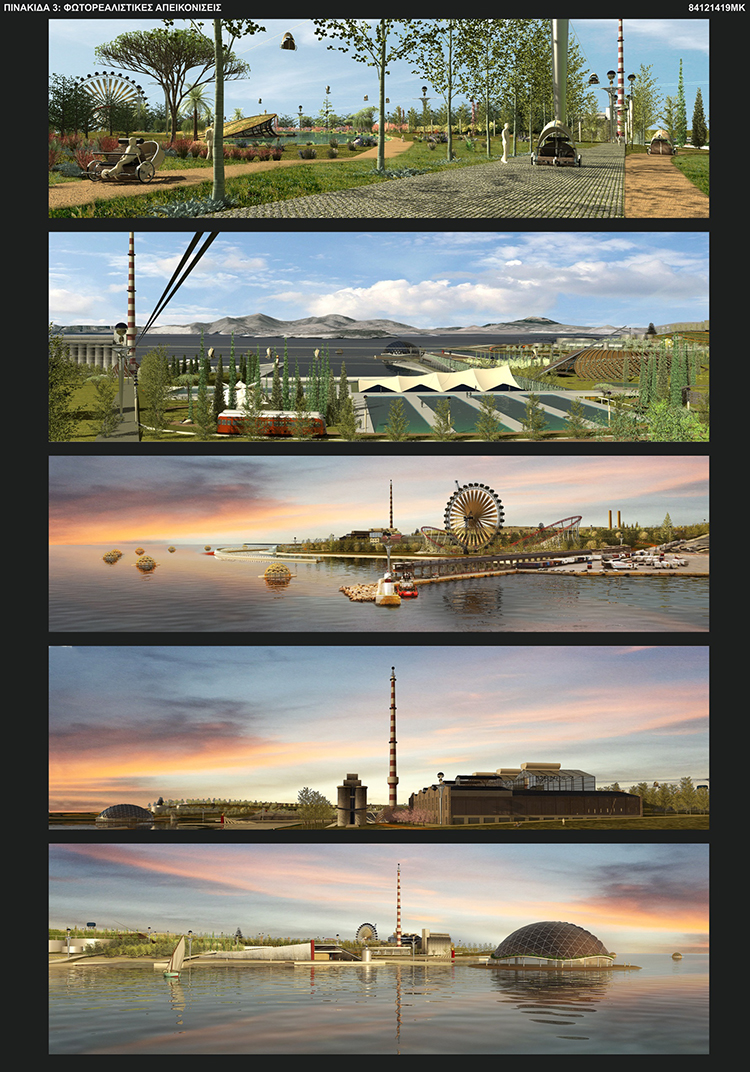 
Notes
1. Guattari, F. (2000). The Three Ecologies. London: Athlone Press.
2. Permaculture is a set of design principles centred on whole systems thinking, simulating, or directly utilizing the patterns and resilient features observed in natural ecosystems. It uses these principles in a growing number of fields from regenerative agriculture, rewilding, and community resilience. The term “permaculture” was coined by David Holmgren and Bill Mollison in 1978 (see: Holmgren and Mollison (1978). Permaculture One. London: Transworld Publishers. p. 128). It originally meant ”permanent agriculture”: an ecological method of agriculture, based on the strategically designed mixture of multiple productive plants (poly-culture), along with landscape design techniques, that seeks to provide resilient-regenerative ecosystems and high quality products, while reducing the ecological-economical costs of pesticides, chemical fertilizers, fuel (for heavy machinery) and human labour. The term was later expanded to stand also for “permanent culture”, since social aspects were integral to a truly sustainable system as inspired by Masanobu Fukuoka’s natural farming philosophy.

+
The work presented here is part of an urban design project (for a Panhellenic Architectural Competition) which was completed with the valuable help of my friends and colleagues Kostis Ktistakis, Panagiota Stylianidou and Aggelos Tzortzis. All images presented come from this project.

Stavros Mouzakitis graduated from the School of Architectural Engineering of the NTUA in November 2009. Since 2010 he has been working as a freelance architect based in Patras. At the same time, he has taken part in a number of architectural competitions (having won an award and two honourable mentions), scientific seminars, workshops, conferences and exhibitions in Greece and abroad. From 2010 to 2014 he worked as a researcher in two research programmes in urban analysis and planning, organized by the NTUA, focusing on the metropolitan centres of Athens and Piraeus. In July 2015, he completed the Interdepartmental Postgraduate Program of NTUA entitled “Design-Space-Culture”, after submitting a dissertation entitled “Playscapes: from a method of Comparative Gameology to a strategy of Ecosophic Gamification”. Since 2016 he is preparing his PhD under the title “Eco-productive Playscapes: Comparative Gameology and Gamification Applications in the context of Integrated Ecosystems of Regenerative Poly-Culture”.

Articles
Poli-Plex-Icon: A tool for city image visualization in the age of complexity
– Efrossyni Tsakiri