1. What is NONUMENT! and how would you describe the aim of the project?

NONUMENT! is an ongoing research and artistic project initiated by MoTA – Museum of Transitory Art from Ljubljana, Slovenia, dedicated to archiving, mapping and studying the architectural heritage, monuments and public spaces of the 20th century. The Nonument Group, an international art collective, operates within the ambit of this platform. By staging artistic interventions, the collective calls attention to the importance of public spaces and the issues caused by non-sustainable management of architectural heritage.


2. How did the project start?

We have always been attracted to working in public space and through our work either as individual artists or as the (MoTA) Museum, we have always looked at how public space, with its potential for collectiveness, can be used and transformed. Monumentality, commemoration and public display of social and political values form one of the currents of the process of creation of public space. More often than not, these displays are manifestations of official histories, and are intended as pillars that will promote the building of a certain political and social vision. They often fail to do so, or their meaning is transformed. In parallel, a similar process takes place between inhabitants and communities organically and often without a visible marker. Some spaces, buildings and monuments acquire a monumental status, because they are meaningful for the people.

We started building a database of Nonuments as a public website, and the Nonument Group FB page in order to share some of them.

And so after observing and mapping these overlooked, abandoned and neglected pillars of values, our first action started in the US, where one of the members of the Nonument Group was intrigued by a brutalist fountain in the downtown harbour of Baltimore. The McKeldin fountain was a focal point for many communities as it was the only designated free speech zone area in the centre of Baltimore- Black Lives matter started there, Occupy Baltimore and many other groups and communities have used it as a place to gather, socialise and express opinions. It turned out that the McKeldin Fountain was set to be demolished and that a community for its preservation was already gathering and fighting to preserve it.
Our first action was to create a workshop and a performative intervention at the Fountain, and also to build a 3D model of it. In the next couple of years, we have developed the Nonument01: McKeldin Fountain, an artificial reality reconstruction of the actual fountain, which was then demolished in 2016. The app allows visitors to experience the fountain in actual size, but also to hear stories from people that used it or saw its value for the city. It is a virtual memorial to an important public space that is now gone. 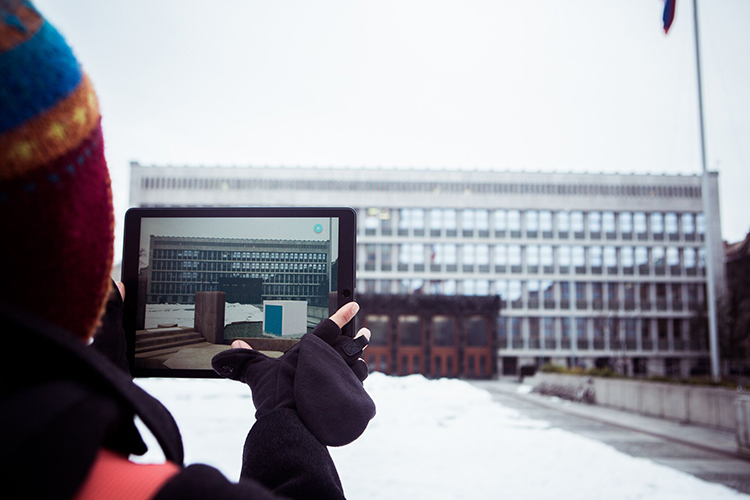 3. What are nonuments – a negation of what, exactly? – and why is it worth documenting them?

Through this project, we formed our understanding of nonuments. They are 20th century public spaces, monuments and buildings that have undergone a shift in meaning, and that hold a special meaning for the community. It is worth documenting them because they form a social landscape of a different kind; they embody values, and therefore also tensions and conflicts, most often to such extent that they are either erased or neglected.


4. What were the criteria to choose and select nonuments when the database was first launched? Have they changed?

The first database was broader and included fascinating, often socialist or brutalist monuments and buildings. We could say that the first mapping was aesthetic rather than conceptual. The database that we have developed in the past two years and that is now available at nonument.org, however, maps nonuments as we have defined them in the previous question. The database is a result of an in-depth work of researchers from five partner organisations (MoTA – Museum of Transitory Art in Ljubljana, CCEA in Prague, Tačka Komunikacije in Belgrade WH Media in Vienna, Artos Foundation in Cyprus, House of Humor and Satire in Bulgaria), that documented selected nonuments through text, photography and oral histories; and in some cases, also with video and 3d scanning. Broadly speaking, in order for a building or a monument to be included in the database, it should be created in 20th century and it should witness a political or social shift, that affected its value and meaning. We were particularly interested in those that carry a special significance for the people. This is also the reason that the map includes oral histories.


5. NONUMENT! Is a collaborative project, which thrives also thanks to the contribution of the public. How does the participatory nature of the project shape it?

The database is still under construction and we didn’t yet promote the option to submit nonuments.
We aim to include voices about different perspectives of the nonuments, stories and statements through oral histories. In our artistic actions we see participation and performance as important elements of our work. This includes choreographed gestures, walking and performance.
When the research we have been working on with our partners will be concluded, we will start encouraging people to submit their nonuments. We are already receiving some suggestions from countries not included in our first round.


6. What has been the most surprising finding of the research so far?

The context of research and dealing with nonuments vary widely according to the context of the place. This can be differences between regions or countries, but also between towns, villages and individual neighbourhoods. This makes sense, since nonument is always a negative of the context: it is an indicator of what is NOT important, what is NOT cherished. But most nonuments are even more complicated than that: they are the ultimate ambivalent structures, still exerting their original ideological power for some, signifying their impotence for others, or are used as an un-reflected visual fetish. Nonuments are not an empty canvas, but they certainly allow for a variety of different conflicting interpretations to coexist. In this way, they exhibit more plurality than what we build today. 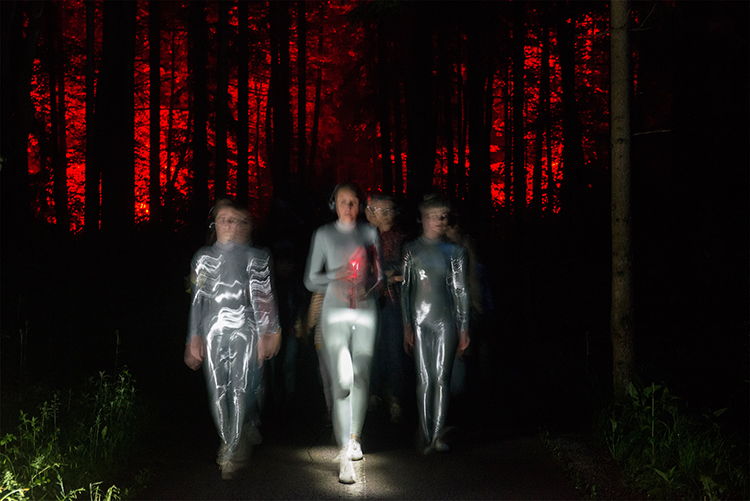 7. How has the public responded to your project?

Continuous channels of communication are the website and the social media where fascination with globally lesser-known structures in danger of demolition or neglect often redefines the East/West stereotypes. Most intensive interaction with the public, however, took place during the two symposia (2018 in Ljubljana and 2019 in Prague) where participants of the project, invited professionals and academics as well as general public had the opportunity for an equal and horizontal discussion. It became clear that nonuments are a contested and threatened group of structures worldwide, although often for different reasons. In the public imagination, nostalgia as well as the wish to erase the past collide most violently precisely in the nonuments.


8. What were the challenges of dealing with the expression of historical and political shifts on a territory?

Because the nonuments are 20th century objects, their history is recent, often hidden and unclear. The documents are sometimes difficult to find, and their stories are ambiguous.
On the other side, they embody traumas and conflicts of very recent histories, so in some countries with communist history it is hard to maintain them or even get local communities to realise that specific monuments and objects have value exactly because of their specific history. So it is quite hard work if you want to preserve them or revive them. Nevertheless, the aim of our work is not to claim a particular truth. Neither is it to demark something as heritage or a monument of national significance, which is often the first step towards preservation. We firmly believe that looking at these structures in depth, rather than turning away from them, raises important questions on how we deal with social issues, trauma and conflicts as a society.


9. In your opinion, in a society with fast-changing values, what architectures and infrastructures are likely to become the next nonuments?

Radical re-contextualisation, including physical destruction and symbolical displacement, is happening all the time. However, it is always more difficult to assess it from within the time we live in, as we usually don’t possess a great deal of critical distance to our everyday lives. This is where architecture is especially helpful. After the 1989 or “The end of history” a number of potentially nonumental typologies have evolved, mainly in connection with the retreat of the public space in favour of privatisation. But the concussions of the free-market hegemony have also created their own nonuments. Abandoned building sites, empty tourist resorts, decaying shopping malls, unfinished speculative developments – all of these have created a vast global nonumental landscape that is worth exploring. Abandoned possibilities can be read not as a fetish but as a critical counterpoint to the mainstream: they represent the shadow part of the ideology of exponential progress and potential. It is the failures, rather than successes, that help us to critically understand not only the space but also the time we live in.


10. How do you see the project evolving?

We plan to expand the map to the other areas- starting with ex-soviet countries like Georgia, Azejbardjan, but also some Western Countries that have so far not been included and through that, interesting particularities will turn up.
Following two successful symposiums – the first one in Ljubljana City Museum and second one in CAMP Prague – we have realised that professionals, but also the general public, have a great interest in and need for this discussion, so we intend to keep the annual symposium going on.
We want to work in collaboration with galleries and museums on developing projects related to specific nonuments (similar to how we intervened on the McKeldin Fountain and the Pioneer Railway). We hope to contribute to the discussion of cultural heritage, to expand that notion from protection to a less rigid understanding that encompasses the conflicted nature of the monument, building or space.


Nonument Group is an artist and research collective focusing on nonuments – 20th century architecture, monuments and public spaces that have undergone a shift in symbolic meaning or had lost it, as a consequence of political and social changes.

Working with institutional partners and individual researchers, the Nonument Group maps and archives Nonuments across the world. Its archive can be read as a map of tensions embodied in spaces and buildings. The Nonument Group’s artistic and theoretical approach aims to dissect memory and context of selected nonuments. With its artistic interventions, the Nonument Group sets out to explore which tensions could be released through each nonument’s repurposing.

The group’s research and artistic production address questions of memory, representation, semantics and other aspects of monumentalism, as well as attempts to publicly address the perception of public space and its role in everyday urban life.