In 2015 a group of anthropologists proposed the concept of the Plantationocene1 to describe the current practice of agrarian production and the alienation of plants, property, and labour, joining a long list of “-cene’s” which recently try to frame processes of human/non-human entanglement (Chthulucene), the role of humans as a geomorphological agency (Anthropocene) or the dominance and influence of capitalism (Capitalocene). While all of these concepts capture crucial elements of contemporary worlding, the Plantationocene’s focus on modes of capitalist agrarian production implies a valuable spatial perspective intrinsic to architectural and landscape architectural practices. Although products such as sugar, palm oil, soy, and cotton are ubiquitous, the circumstances of production and their spatial effects—from territories of extraction to spaces of trade and accumulation—are largely understudied in the field of architecture and urban studies.

In the case of palm oil, the socio-ecological impacts of the expanding plantation landscapes are discussed in social and environmental science research2—mainly focusing on “frontier” landscapes—but the spaces of production and circulation are not subject of architectural and landscape architectural research. During the last decades, design disciplines neglected territories of extraction and circulation by focusing on cities and large urban agglomerations, thus surrendering infrastructural and agrarian spaces to the realm of economic and environmental engineering. Challenging this city-centrism3 of architectural and landscape architectural research and design could enable a productive dialogue across disciplines that engages with territories of extraction and distribution of resources.

The proposed research asks: What is the role of architects and landscape architects in the transformation of operationalized territories of agro-industrial palm oil production? How do people inhabit and traverse those landscapes? What are the spatial dimensions of the palm oil supply chain and what are the vectors of spatial transformation in contemporary production landscapes?

The following photographic essay documents phenomena encountered during a scoping research trip through Peninsular Malaysia — from Kuala Lumpur to Singapore. It aims to collect initial research questions and raise curiosity about the future of a long-standing palm oil plantation landscape.

1. A row of palm trees at a gas station along the highway between Kuala Lumpur and Singapore. Hentian Sebelah Kulai South Bound, Malaysia.

Setting the scene
Driving for six hours between Kuala Lumpur and Singapore, one can’t see anything other then palm trees. Theoretically, there are more than 50,000 trees planted at an equal distance of eight meters lining the highway.


The palm trees along the highway are not ornamental trees planted in one line: The endless sea of spiky trees expands uninterruptedly in offset rows till the horizon. Like modern land surveyors, they seem to measure the territory by triangulation. Bio-monotony as far as the eye can see. 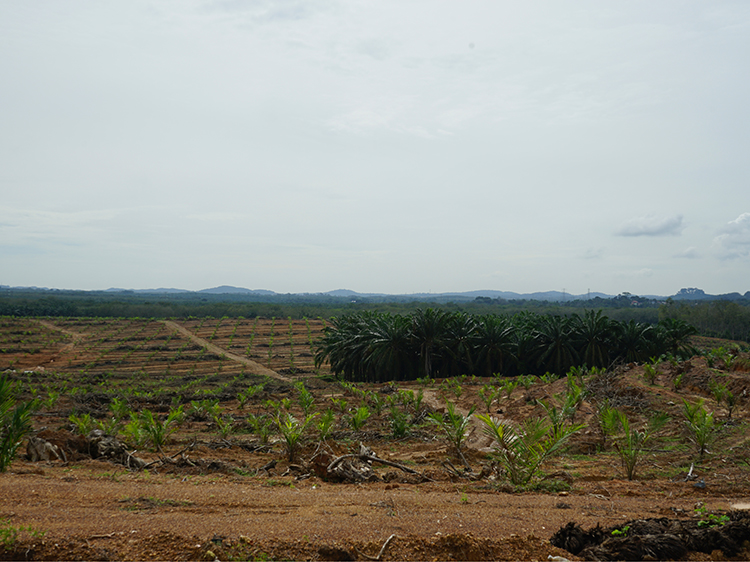 2. Partial replanting of a palm oil estate in the most economical 8×8 meter grid. Segamat, Malaysia.

Plantation landscapes: the synthesis of field and factory
Since the early British colonization of Peninsular Malaysia, the agrarian sector has been dominated by large scale plantations. This type of agrarian production proved to be particularly useful in expanding the colonial project by utilizing land while simultaneously securing power over land, labour, and export-oriented resource production. As colonial exploitation machines, the plantations transferred the logic of the factory to the landscape. Standardization, clearly defined procedures within the production process, and the measurability of output and yield were directly translated into the logic of agricultural production.

After the Malaysian state emerged after several years of struggle for independence, the plantation system was appropriated by the newly found nation-state, and, due to the declining demand for natural rubber, most of the Hevea trees (rubber) were replaced by the African Palm4. Artist Simryn Gill strikingly summaries the history of the plantation landscape in peninsular Malaysia: “How many of us are left who knew this landscape before there were plantations, or estates, as we call them? In my time they’ve never not been here.”5 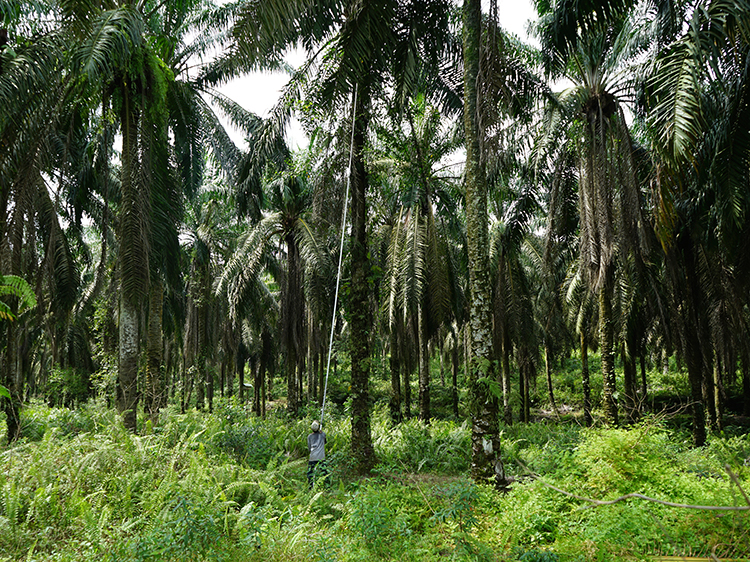 Becoming palm: how palm oil became ubiquitous
Triggered by the universal application of palm oil and its features as a “flex crop”6, plantations expanded across the Malay world from the 1970s onward. This time, neo-colonial international institutions facilitated and promoted the “development crop” in tandem with the newly found nation-states. Today, Indonesia and Malaysia dominate the production statistics, producing more than 80% of the global crude palm oil covering an area of 200,000 square kilometers—roughly the size of the whole island of Great Britain.

During the second half of the 20th and the early 21st century, palm oil production expanded at an unprecedented scale, mainly at the expense of the indigenous forest. The sea as socio-economic space was replaced by land: Fisherman became farmers inhabiting the territories of palm oil production. Fishing rods are replaced by extendable sticks, equipped with saw blades, long enough to cut the fresh fruit bunch from the top of the oil palm. 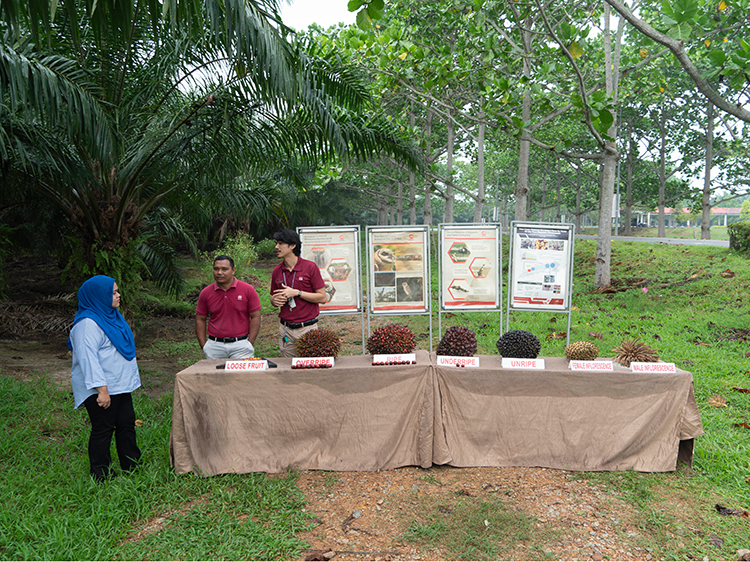 Plantations as territorial systems
Inside the territories of agro-industrial production, the estate becomes the essential unit to quantify efficiency by measuring fertilizer input, labour, and yield. The plantation-as-factory system, equipped with a palm oil mill, becomes a territorial infrastructure that subordinates every other land use.7 The oil palm is just too lucrative to plant anything else.

Ripe fruits are picked and delivered to the mill where the oil is extracted within 24 hours, otherwise they go rancid. With a catchment radius of 50 kilometers, the mill dominates the landscape, and smallholders in the area start to shift cultivation to participate in the export economy. 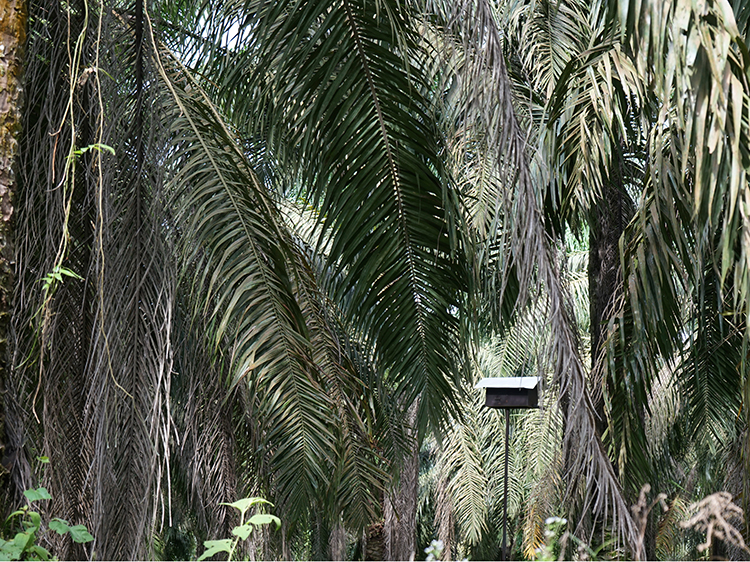 Ecological modernism: techno-managerial green grabbing
Once in a while, there are huts to house owls, who eat the rats, who like—and therefore feed on—palm fruits. Managers call this biological pest control. As part of sustainable management strategies, this practice was invented in tandem with sustainable certificates to calm increasing criticisms on farming practices. The certification industry became a crucial marketing tool that simultaneously enabled the expansion of production—creating sustainable territories through a complex layering of regulatory authority.
Since the majority of consumers are decoupled from the production of palm oil, the certification industry underpins a commodity fetish with a purposeful externalization of production. The black box of production and circulation is labelled “green” but simultaneously remains uncharted. 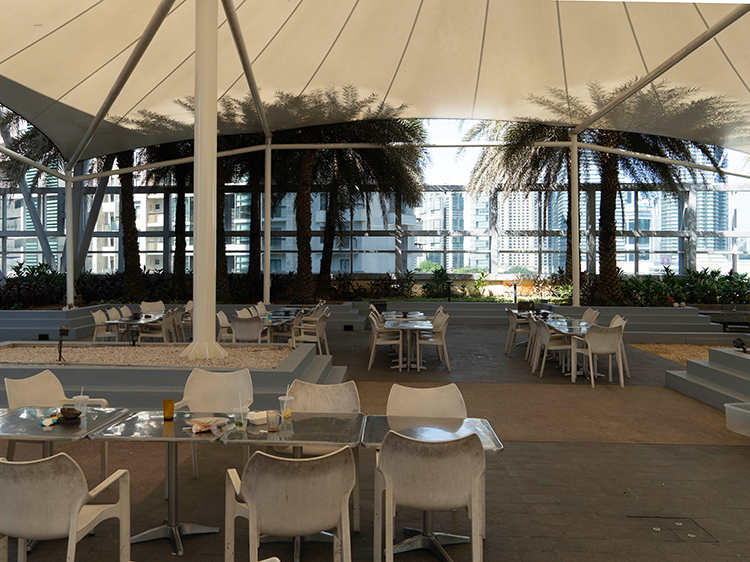 Crystals of the palm oil industrial complex
Through estates and mills, land is rendered investable for conglomerates of transnational companies often backed by local, political elites. In Kuala Lumpur, Singapore and Jakarta palm dollars accumulate and crystallize in the form of office towers, research institutes, and stock exchange buildings. In those spaces of ultimate commodification of nature, the palm tree becomes reduced to a scenic backdrop, reminiscent of the tropical region it inhabits. As an urban reflection of industrial agriculture, these architectures need to be conceptualized together with the hinterlands and territories of extraction that they operate and design. 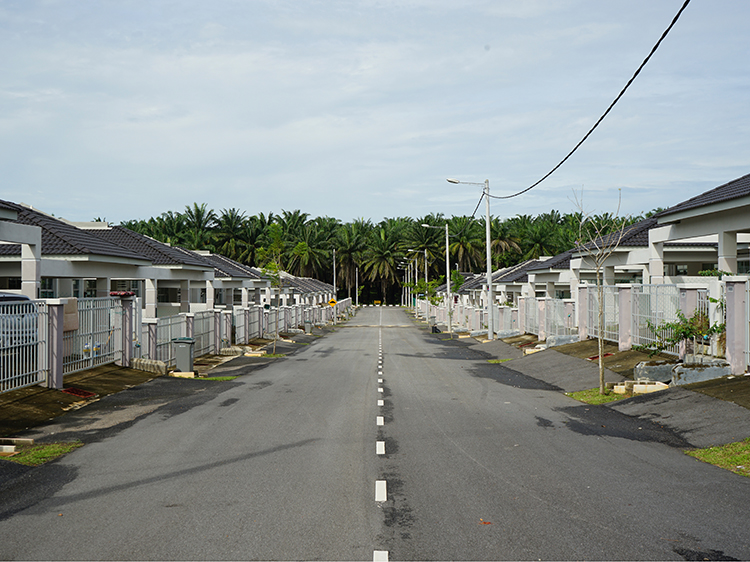 If there are houses, they are built on palm oil estates. The newly found administrative center of Malaysia, Putrajaya, was built on a palm oil estate in 1995. The site where the Indonesian president is planning to relocate the capital city and governmental offices from Jakarta is also full of palms. To cite Simryn Gill again, “Where there were rows of trees, there are now sprouting new towns, oil palm estates are becoming housing estates.” 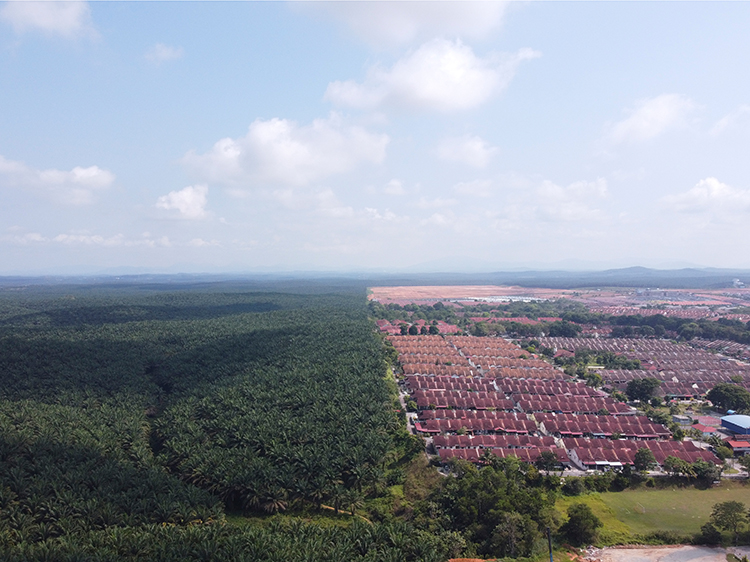 8. The expansion of the Bandar Putra Housing Estate on the adjacent plantations is scheduled for 2022. Kulai, Malaysia.

Operational landscapes and the future of the plantation
Throughout the 20th century, design disciplines have been concerned with projecting a productive entanglement of urban environments and agriculture by envisioning crucial infrastructures, settlement patterns, and production typologies.8 In doing so, design played a crucial role in facilitating the synthesis of interdisciplinary knowledge and ideas. After celebrating the Urban Age as a city-centric project, design disciplines are returning to investigate the other ninety eight percent of the earth’s surface.9
Looking at the palm oil plantation landscape between Kuala Lumpur and Singapore triggers further research into the palm oil supply chain and its spatial implications.
How did palm oil production operationalise the landscape of Peninsular Malaysian? What are the spaces and landscapes incorporated in the palm oil supply chain and what are the vectors of spatial transformation in contemporary production landscapes?

+
All photographs are taken by Hans Hortig on a research scoping trip between Kuala Lumpur and Singapore between the 22th and the 30th of September, 2019.

Hans Hortig studied landscape architecture at the TU Berlin, the ETH Zurich and the School of Design, Mysore. In 2013, he joined Architecture of Territory, Prof Topalovic, at the FCL Singapore and at the ETH Zurich where he taught design and research studios, organized lecture series and guided numerous student projects. In 2015, he co-founded the cartographic studio maps&more with Karoline Kostka and recently started his PhD research investigating processes of extended urbanization in Southeast Asian palm oil territories.