Many overcrowded neighbourhoods of Naples’ historic centre are still lacking in public services and recreational spaces. As a consequence, most kids from the lower social strata spend much time outdoor on their own, learning quite early the code of the street and developing a strong sense of belonging that comes along with a neat cultural and spatial distinction between the neighbourhood and the outside world. By far, the kids’ favourite display of such sense of belonging consists in the bonfire arranged for the annual feast of San Antonio Abate.

The bonfire routine dates back to centuries-old rituals widespread across rural Italy, wherein several communities used to salute the Saint by burning firewood or worn furniture. In more recent times, it became very popular among the kids of central Naples, turning into an urban ritual concerned with in-group cohesion, neighbourhood attachment, and territoriality. In fact, the kids now perceive that routine as a competition between rival neighbourhoods over who organises the biggest fire. On the other hand, the routine in its current form has been lately contested by several residents as a dangerous and inappropriate use of urban space, and is now in the firing line of the city administration.

As for my neighbourhood, namely the Spanish Quarters, this year’s bonfire took place over the ruins of a private building collapsed decades ago, which make one of the very few open-air spots in the tight grid of blocks and alleyways of that area. The twelvish-year-old kids started preparing two months ahead of the 17th of January, when the feast of San Antonio Abate recurs. They accumulated the largest amount possible of Christmas trees to be employed as firewood (they either receive or steal the trees from condos and retail shops outside the neighbourhood), storing them in some hideouts constantly protected from the intrusion of public authorities and rival neighbourhoods. When the day came, the kids piled up the trees in the designated space and confronted a dozen policemen who were preventively ordered to halt the bonfire. The skirmish between the kids and the police lasted a couple of hours, featuring handcuffs, patrol cars, petrol cans, and Molotov cocktails. Eventually, the kids prevailed and managed to light the fire. 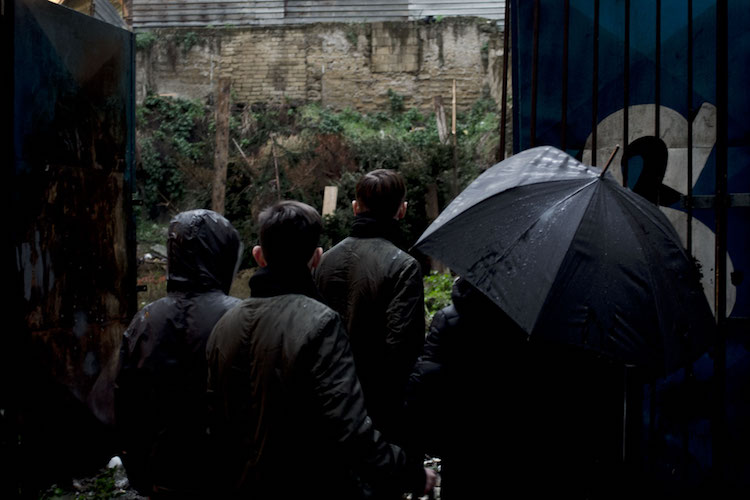 1. Some of the kids look at the woodpile after the police inhibited them from setting it on fire 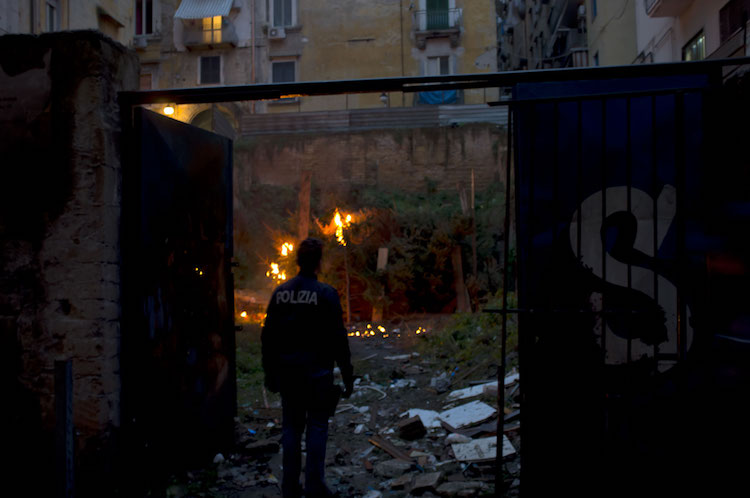 2. A Molotov cocktail thrown by the kids from the other side of the wall sets the woodpile on fire 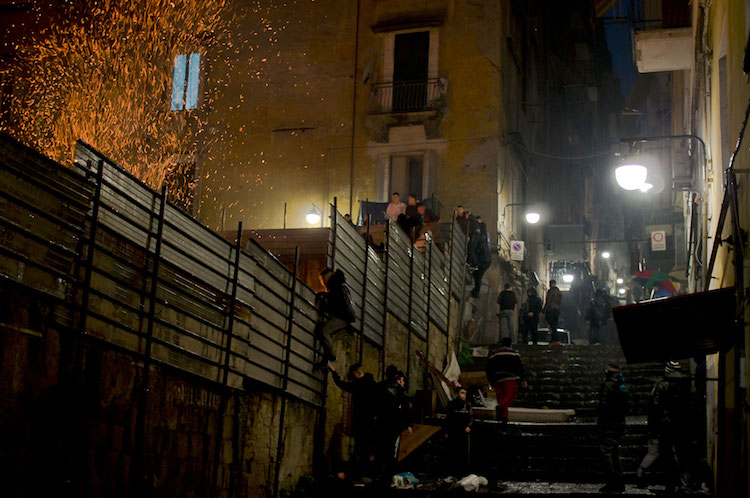 3. The police abandons the field: the kids start climbing the walls and crowing over victory 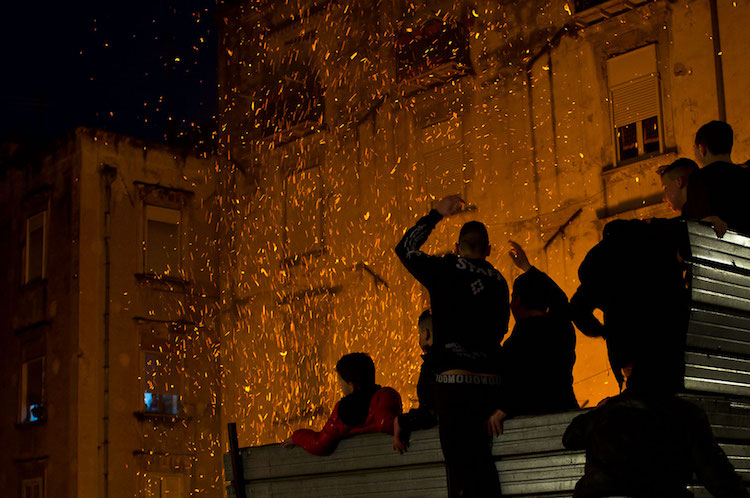 4. The kids mock the police and the rival neighbourhoods by singing in chorus 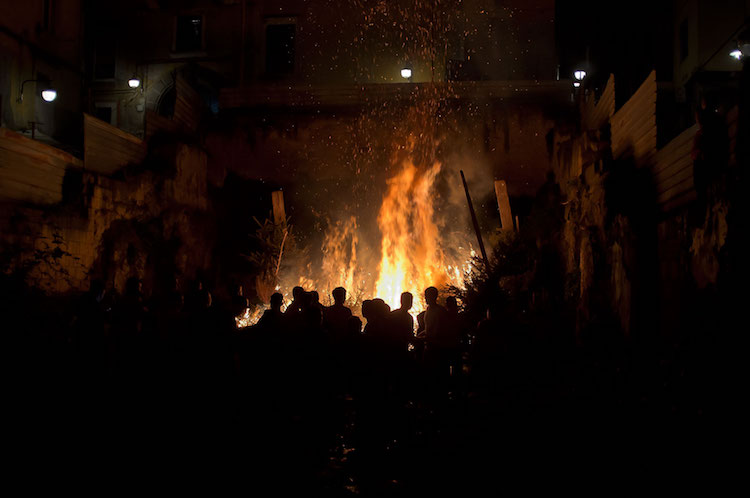 5. Everyone is gathering around the fire by the end of the celebration

Whilst the entire routine of the bonfire was vividly depicted a few years ago by an independent documentary film, namely Cyop&Kaf’s Il Segreto (2013), I turned my gaze at the ritual as it unfolded in 2017 for the purpose of studying the informal organisation of urban space in the Spanish Quarters. Along these lines, this particular case study is contributing to my analysis of the spatial logic of the neighbourhood in terms of a Bourdieuian field organised around the sub-cultural capital of the local community1. How the features and distribution of this capital are interwoven with the urban political economy of Naples, including the geography of the Camorra and the city’s recent tourism boom2, constitutes the object of my current research.


Notes
1. Breaking with the functionalist tradition in sociology, Bourdieu (1986) reworks culture as a form of capital which distribution is entangled in the stratification of different fields of social conflict (e.g. the field of politics, the field of arts, etc.). On these grounds, I employ the concept of ‘street field’ (Shammas and Sandberg, 2016) as a frame of reference for the particular form of sub-cultural capital accountable for the social order of the Spanish Quarters and embodied by the kids who partake in the bonfire ritual.
2. A highly fragmented criminal network, the Camorra has been long implicated in the (informal) production and exchange of protection in central Naples, combining transnational crime with a strong local territorial control (Gribaudi, 2009). Since the 90s, though, the centres of power of the Camorra have been moving to the outer suburbs. This shift in the geography of Naples’ organised crime had a significant impact on the local political economy, enabling a number of social and economic processes (like the tourism boom) which are often at odds with some traditionally established informal uses and users of public space (like the bonfire ritual and its participants).

+
The pictures in the present article were firstly presented at the British Sociological Association Annual Conference 2017 hosted by the University of Manchester on April 4-6.

Mario Trifuoggi is a PhD candidate in Sociology at Goldsmiths, University of London, UK. He earned an MSc in Sociology at the London School of Economics and Political Science, UK. He had started his Doctoral Training at the University of Trento, Italy, before moving to his current position. His PhD project consists of an urban ethnography focussed on the informal organisation of public space in the historic centre of Naples. Besides urban sociology, his area of interest includes social theory and the philosophy of social science.