Transstruktura created a series of temporary urban interventions using old glass containers as modules for spatial sculptures in public spaces. Since the first installation in 2014 these modular objects served as temporary accommodation, urban retreat, playground and pop-up outdoor furniture. As they are breaking with expectations and common usage, they are opening up new perspectives and experiences in the urban landscape.

The team first workded with this material in 2014 during the competition for “HOTEL shabbyshabby”, a temporary hotel room for the international theater festival “Theater der Welt” in Mannheim. 7 stacked and intersected containers form a space with a central cupola and several side chambers. The central cupola is tall enough for standing. The main volume invites to sit and communicate, while the side chambers are suitable to sleep and relax. The holes where once bottles were dropped into the recycling containers, are now skylights with windows made from old washing machines. An archetypal language is used to transform the functional object into an architectural space with sacral and monumental qualities.

After its premiere as a hotel room on the market square of Mannheim, “The Dome” was presented in public events and exhibitions in Berlin, Köln and Herford. The public was invited to reinvent “The Dome” functionally for each new site. 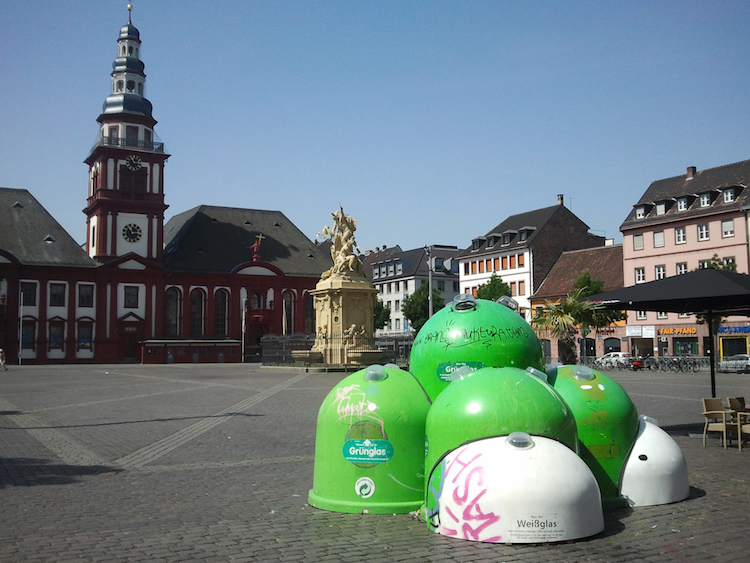 1. Premiere of the dome as a hotel room at the theatre festival “Theater der Welt” in Mannheim, 2014. 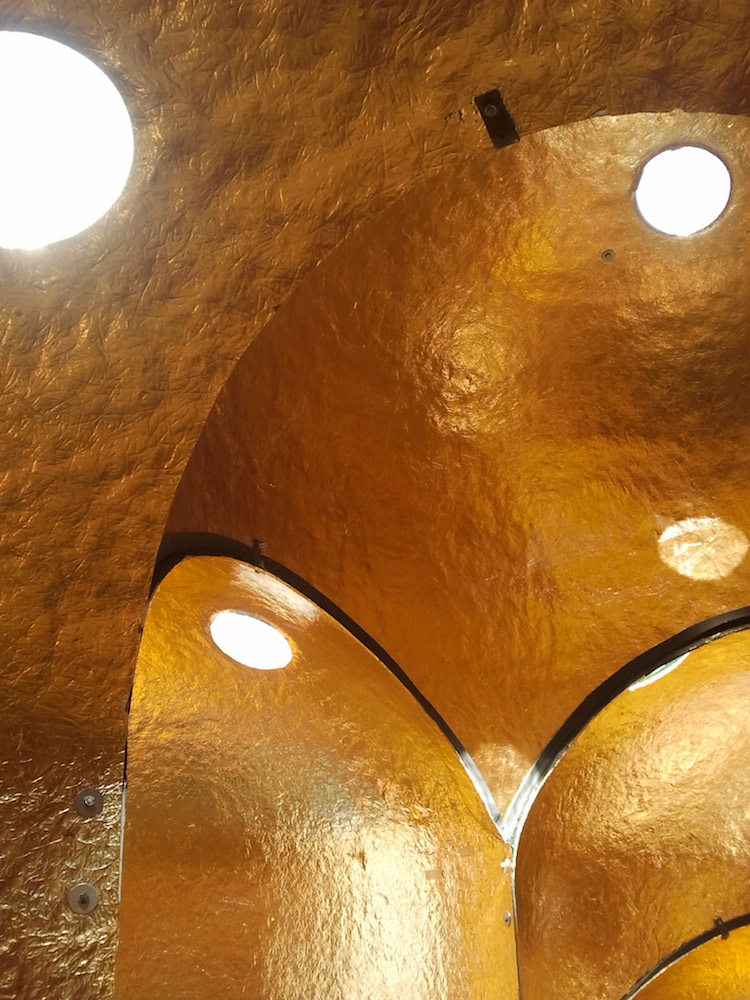 2. The interior walls are covered with gold foil, giving the former functional object a sacral character. 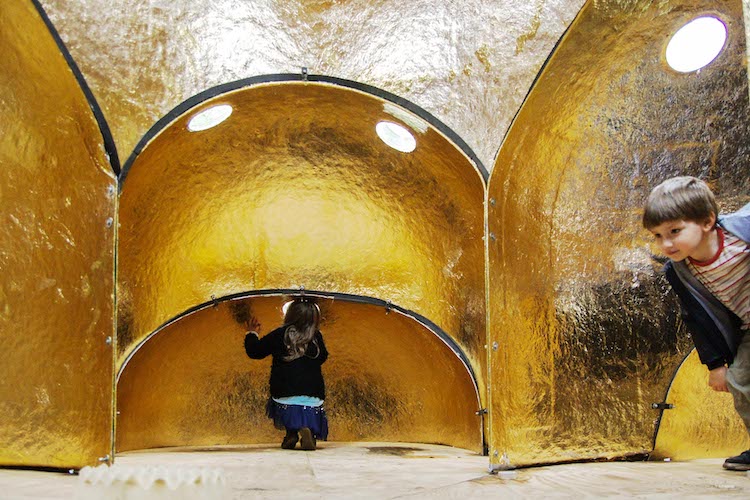 4. Interior space with a central cupola and several side chambers 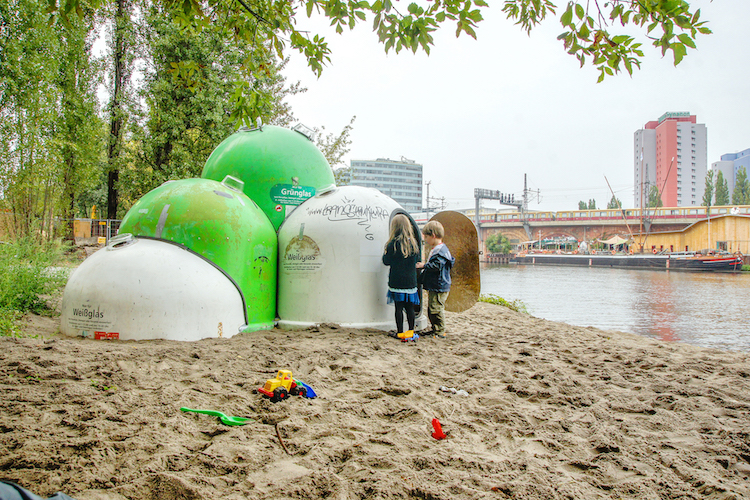 5. The domes appearance as a temporary retreat on the Spree river in Berlin 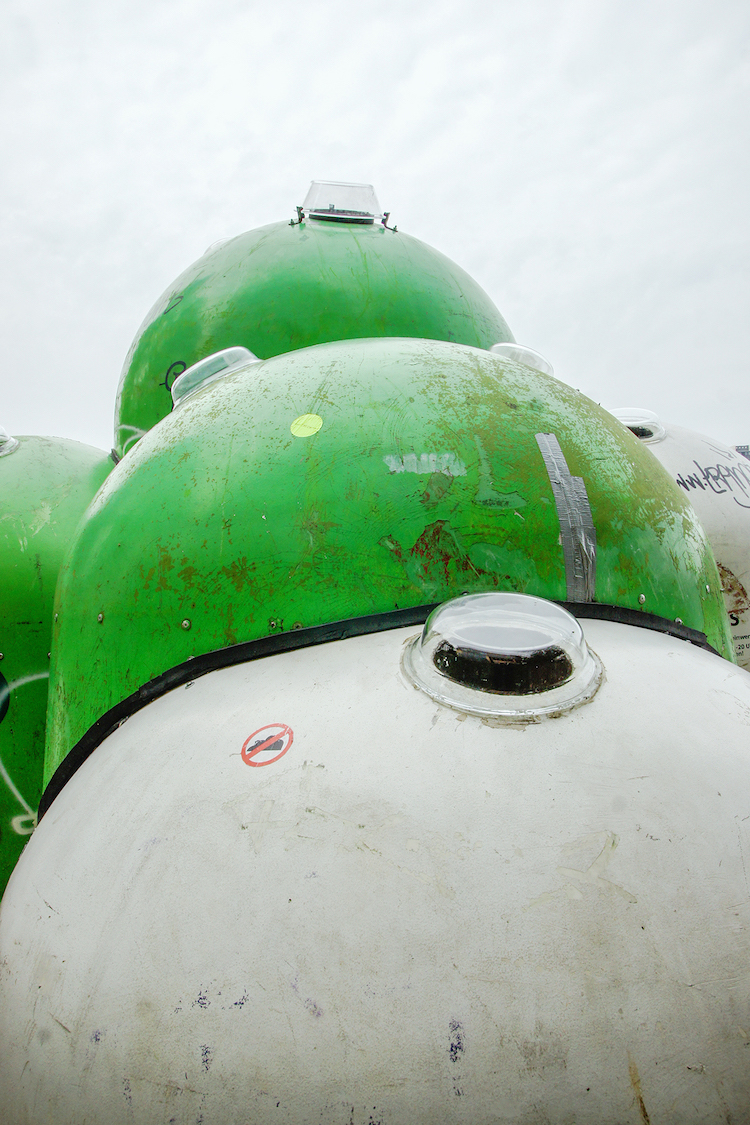 8. The holes (once for bottles) are now skylights with windows taken from old washing machines.

Transskultura continued to experiment with this recycling material and created a series of objects as playground, outdoor furniture and more. On the occasion of 160 years of German – Uruguay friendship in 2016, architects, artists and designers from Montevideo and Berlin met for a one-day workshop to design mobile kitchen aids and cooking constructions, to eat, drink and talk the very same evening. Transstruktura has developed a mobile pop-up table for this event “Food Dialogue: Sobremesa Mobile” (Berlin, Alexanderplatz, summer 2016). A glass container was divided horizontally into two parts. The main part was filled with seats and a table top, and then closed by the upper section for means of transportation throughout the streets. DOMobile conquered the city space as a multifunctional furniture. 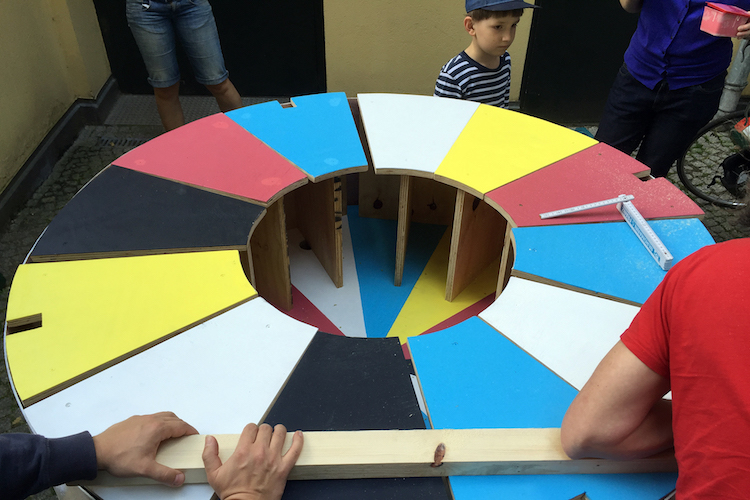 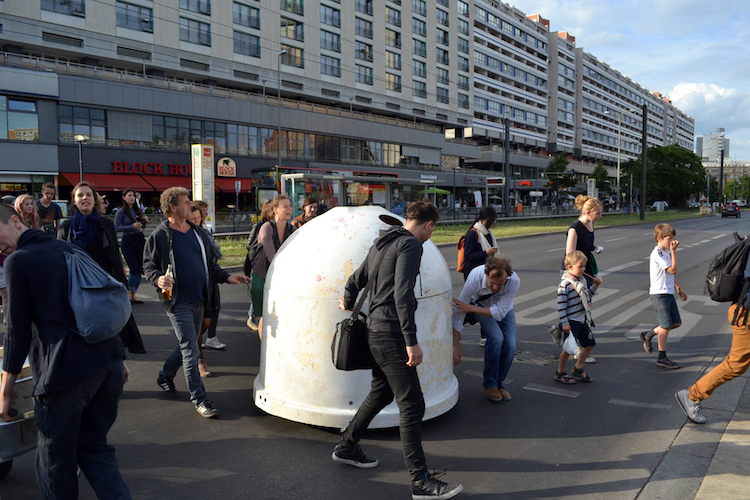 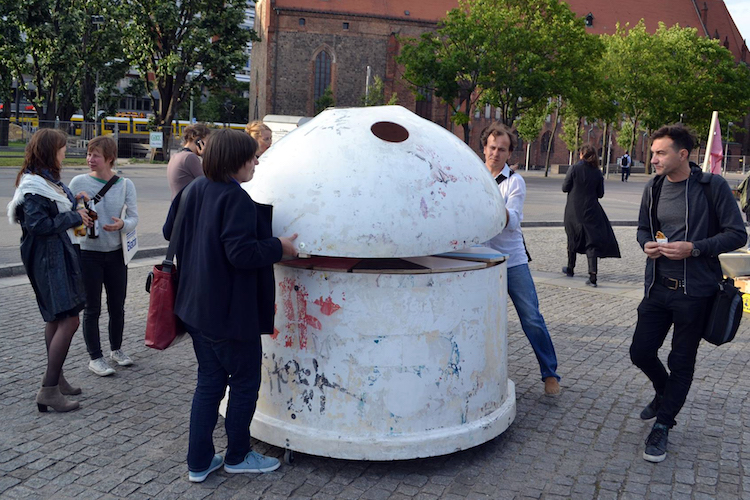 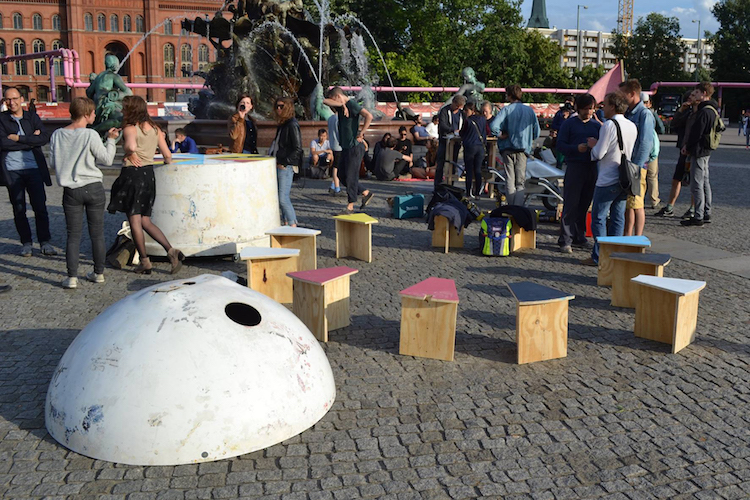 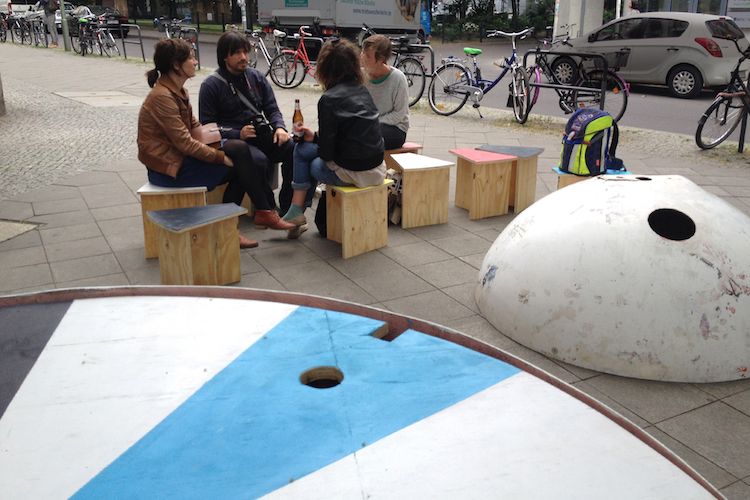 14. The disassembled DOMobile consist of a round table, 12 stools and a cupola bench

A classic glass container is a pure functional object, but its unique basic shape has an undeniable influence on the cityscape. Around 2000 old glass containers were sorted out last years by the recycling company in Berlin. Thanks to the stability of glass fibre, most of them are still robust enough for further usage.

In addition to the recycling aspect, Transskultura were eager to transform an everyday object to create a unique reinterpretation of the urban space. The “Altglascontainer”, which withdraws from our attention through its omnipresence, became an accessible space sculpture and an object of art. All DOM modules share the ability to multiply into various shapes and to occupy and transform public urban spaces in a parasitic way.

Transstruktura‘s core team is formed by four architects: Nataliya Sukhova, Wiebke Lemme, Andreas Heim and Viktor Hoffmann. Transstruktura is an open group of architects who form a suitable working community for every project, giving us very flexibility and a broad spectrum of competences to chose from. Since our studies at the Bauhaus-Universität Weimar, we have been working on a common form language, with a focus on creative experimentation. We see our task as combining space concepts with a realistic and solution-oriented implementation. As an interface between architecture, city planning and new media, we have a complex and interdisciplinary approach to design.