“The streets of London have their map; but our passions are uncharted. What are you going to meet if you turn this corner?” These words, from Virginia Woolf’s 1922 novel Jacob’s Room, are the starting point for five artists, brought together by study in the Bloomsbury area, to reconnect to the district’s literary heritage, via a compilation of handwritten descriptions of everyday things that connect the contemporary Bloomsbury community to the locale.

Woolf’s words are an invitation to explore, engage with, and record, the emotional connections between everyday personal experience and urban space, and the artists sought to gather individual stories revealing an alternative, affective, representation of Bloomsbury.

The work consists of an A0 cork-board onto which postcards have been pinned and burgundy string used to attach the stories to specific places on a map. The map is hand-drawn on yellowed A1 card. It was created collaboratively beginning with main roads and squares, with detail added as content was gathered. The purposefully unfinished aesthetic affirms the ongoing evolution of the project (figure 1). 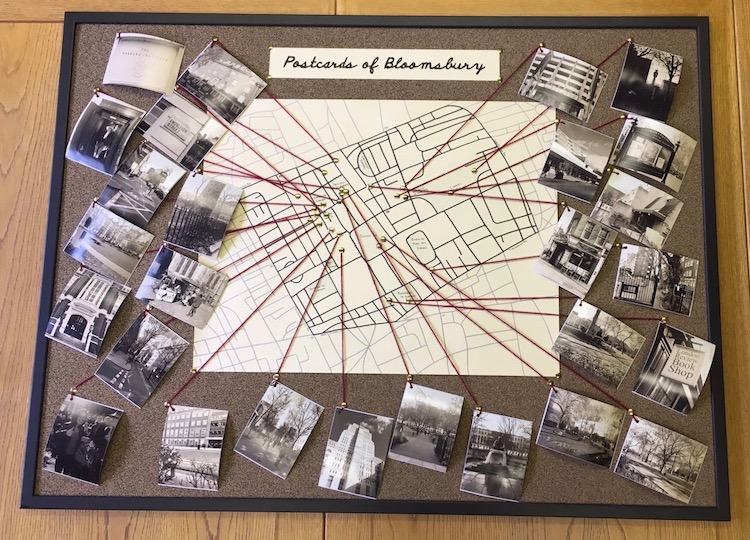 1. The Postcards of Bloomsbury Board

The artists approached people on Bloomsbury’s streets and public spaces to engage in conversation about their connection to Bloomsbury, asking questions such as ‘What brings you here today?’ or ‘Where’s your escape in Bloomsbury?’. This framing invited a positive response, marking the work as a conscious celebration of Bloomsbury. The interactions between the artists and members of the public provided opportunities for personal engagement, and for an individual to stop, reflect, and write about their important place in the format of a postcard. Seeking a wide range of voices, the artists purposefully approached people who they perceived to be from a variety of backgrounds. The artists photographed the places written about for the image on the reverse of the postcards. The variation between close-up and wide-angled photographs speaks to the diverse places identified in the postcards, from specific bookshops to entire squares (figure 2). 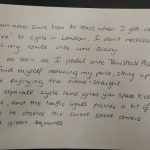 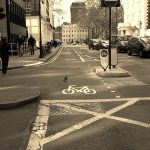 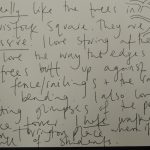 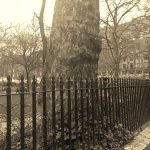 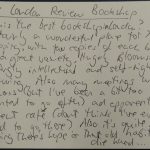 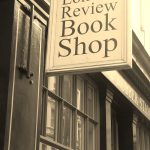 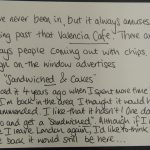 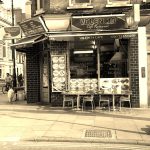 The work tells an everyday story of Bloomsbury and engages with day-to-day urban experiences that are often overlooked. It is a story of the parts of Bloomsbury that one might not find in a guidebook. In blending personal stories with the plotting of points on a map, the artists critically respond to and challenge the imagination of cities advanced in much of the glossy literature produced by corporations and consultancies working in the urban realm which privileges consumption and commodification. Guidebooks to cities such as London include the same expensive and stereotypical lists of landmarks to be consumed by tourists. Increasingly recommendations are influenced by businesses seeking to monetise cultural capital. Consultancy reports present culture as important for a city primarily as income generating potential through attracting business investment and tourism. The work resists and re-evaluates the commodification of the city – and culture in particular – by reflecting the everyday experiences of those who live, work, study and play in Bloomsbury, in contrast to top-down representations of normative urban life.

Prompted by this framing and the discussions the artists had with participants, the descriptions on the postcards focus on easily accessible, often free spaces rather than the spectacular or commercial. The themes throughout the postcards of nostalgia, place-making and escapism reflect this non-commercial focus. Nostalgia is present in descriptions of places that people have known throughout their lives which display notions of permanence and attachment – “I like to think if I came back it would still be here…”. The importance of place-making is evident in people’s writing about places that they have strong connections to – “I have enjoyed walking there with my family including my young great niece”. Many of the spaces are places of retreat and escape, particularly Bloomsbury’s green spaces – “It’s a place where I think and reflect as well as eat”.

This project has strong links to artistic work that asks the public to share memories and feelings and work which maps community spaces. Inspiration is drawn from artists such as Candy Chang, whose 2011 work Before I Die1 covered an abandoned house in blackboards and asked people to complete the sentence ‘Before I die I want to …’. Similarly, Gillian Wearing’s early 1990s work Signs2 photographed people holding signs displaying written confessions. Postcards of Bloomsbury takes forward these ideas of sharing personal thoughts and converges with the practice of participatory mapping, inspired by groups such as Livingmaps3, who ‘blur the boundaries between professional and amateur mapping’, and from the Anti-Eviction Mapping Project’s Oakland Community Power Map4 which asked members of the public to mark on a map-mural places in Oakland that sustain them ‘spiritually, culturally and creatively’. By combining community mapping with storytelling and memory, this work provides deeper insight into people’s attachments to Bloomsbury than a straightforward mapping project while emphasising a stronger relationship with the built environment than a more abstract secret-sharing work. 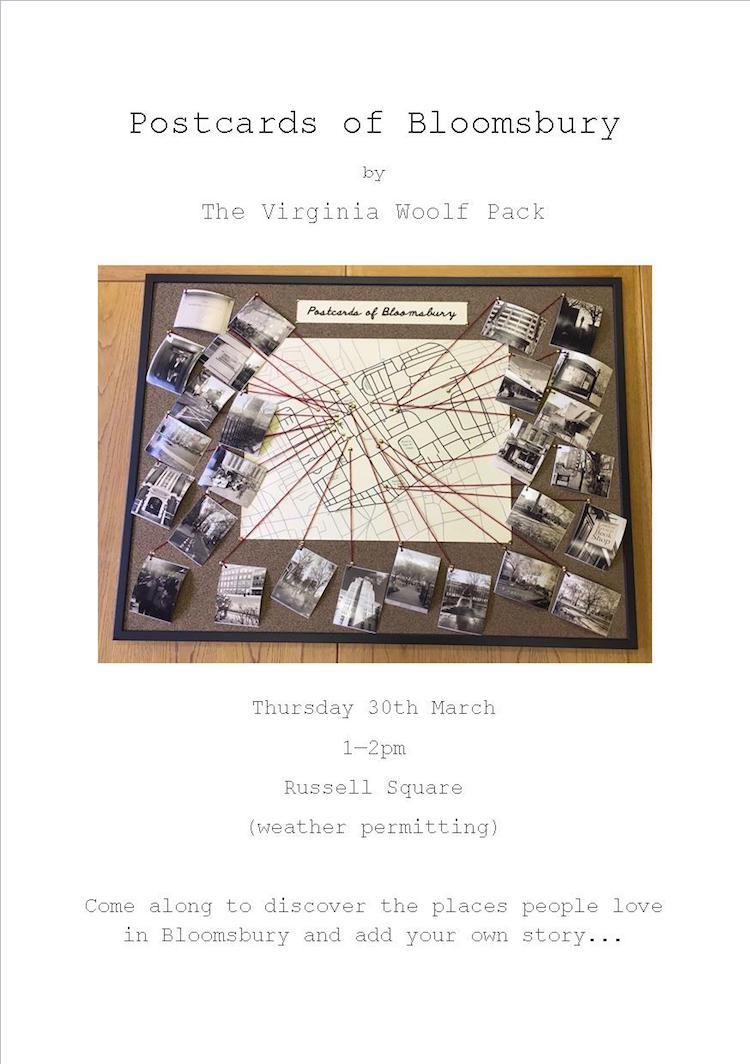 Remaining true to ideals of participation and continued evolution this work will not be displayed in a gallery but will be toured around the public spaces of Bloomsbury in guerrilla art displays (figure 3). In October, it will be included in the Bloomsbury Festival. Viewers are encouraged to engage with the work’s tactility, flipping the postcards to read the accompanying descriptions. This is an opportunity for members of the public to engage with the work and add postcards of their own, pinning these directly to the map. The artists are photographing these interactions and recording the Bloomsbury tour using Tumblr: https://postcardsfrombloomsbury.tumblr.com/.

The Virginia Woolf Pack, formed 2016, (Ruth Ellenby, Chris Adan, David Allen, Liz Tyrrell, Sarah Taylor) is an art collective formed by a group of students who have recently completed the Urban Studies MSc at University College London. Based in Bloomsbury, the collective explores the everyday lives of people living, working and studying in, and passing through this corner of London. The members have backgrounds in Geography and Sociology as well as varied professional experience. They draw on their collective training in urbanism in their work.