COVID-19 spreads best in enclosed and crowded rooms; according to this many potentially dangerous spaces have been detected. In case of outbreaks, these spaces have been locked down by the authorities. A further measure undertaken to prevent the virus from spreading further, is the defining and quarantining of social networks within housing areas. However, the people in these networks often did not have much in common, except one thing: They were inhabitants of so called ‘social hotspots’.

The metaphor ‘social hotspot’ itself must be critically examined. What does the term ‘social hotspot’ describe and what does it imply? The official definition leaves much space for interpretation and speculation. To better understand the mechanisms and effects of metaphors regarding a pandemic, the term social hotspot is analysed with reference to Susan Sontag’s essay Aids and its Metaphors. To put this analysis into context, different newspaper articles about COVID-19 outbreaks in so called social hotspots are examined.

The use of military vocabulary as a tool of public health education became popular in the early 19th century when the efforts to reduce mortality rates of pandemic diseases like syphilis and tuberculosis were named ‘fight’, ‘struggle’ or ‘war’ in official campaigns1. At first sight, the use of those metaphors might not seem to threaten infected people, because they are not the ones that are directly addressed but rather the illness they got infected with. However, Sontag explains that a shifting from the biological process of infection into a moral and political evaluation of people evolves through a process of othering: ‘The metaphor implements the way particularly dreaded diseases are envisaged as an alien “other,” as enemies are in modern war; and the move from the demonization of the illness to the attribution of fault to the patient is an inevitable one, no matter if patients are thought of as victims. Victims suggest innocence. And innocence, by the inexorable logic that governs all relational terms, suggests guilt.‘2

Is the term ‘social hotspot’ used as a metaphor with regard to the spread of COVID-19 in German media discourse and does it instigate the stigmatising processes described by Susan Sontag?
Citing Aristotle, Susan Sontag states that metaphors are used to give something a name that belongs to something else3. In chemistry, a hotspot is the temperature at which gases start to burn. Therefore, the term belongs to natural science, it is originally not describing a social space and thus can be defined as a metaphor. But what does it mean in this case? The official definition was introduced by Deutscher Städtetag, a union of German cities, in 19794. It defines social hotspots as ‘residential areas in which factors accumulate, that have a negative influence on the inhabitant’s living conditions, particularly the chances and socialisation conditions of children and young people’ (translation by the author). There are two groups of factors that can be differentiated. On the one hand there are infrastructural deficits like poor building fabric, lack of real estate maintenance, the absence of retail and cultural supply as well as mobility barriers like insufficient public transport or isolation of plots from the urban context5. On the other hand, there is a complementary social side to the concept: The majority of inhabitants within the described area are socio-economically disadvantaged. This especially refers to a relatively high percentage of people dependant on financial aid and high unemployment rates compared to an average figure6.

The metaphor remains vague because any effect that might be related to the aforementioned factors can be integrated and therefore stigmatise people. For example, marginalised groups like ethnic minorities are more likely to suffer from poverty. Therefore, there is a greater chance that a relatively high percentage of people with migration history are found within so called social hotspots7. The metaphor is not challenging the reasons why people are disempowered and how these dynamics should be changed. Instead, it defines a geographical area and its inhabitants as a space on fire that should be extinguished or at least isolated before flames spread to the faultless but flammable urban system. Thus, the metaphor social hotspot can lead to stigmatisation of various are socio-economically disadvantaged actors.

Two case studies from two different urban areas have dominated the public discourse in June this year, where outbreaks of COVID-19 have been described as social hotspots in several German newspapers. The first one is a high-rise housing compound in the small university town of Göttingen. When a COVID-19 outbreak among inhabitants of the Iduna Zentrum high rise, built in 1975, was discovered in early June, it was made public by the city council. In the public announcement the council speculated that the outbreak might have been caused by families celebrating the Islamic Sugar Feast in large groups, disrespecting recommendations on infection control. Thereupon the whole compound was locked down in quarantine and 60 of its roughly 600 inhabitants tested positive for COVID-198. 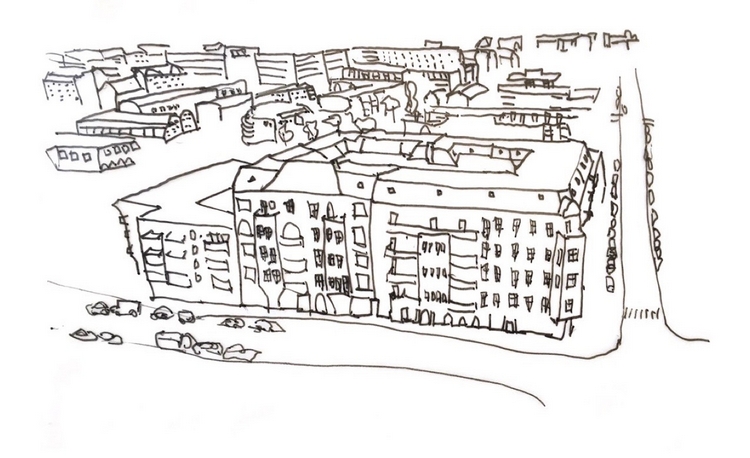 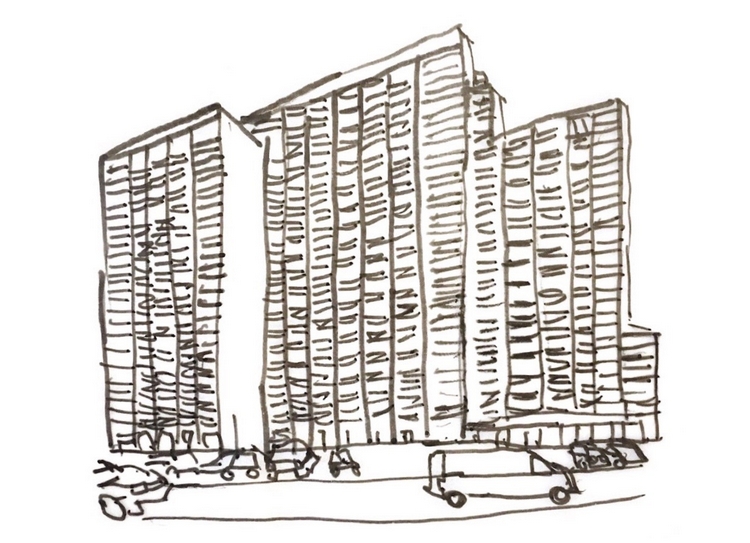 
Göttinger Tageblatt:
‘Tense atmosphere at the Iduna Zentrum Göttingen’9 (translation by the author). The article introduces the Iduna Zentrum as a formerly coveted apartment complex that has turned into a social hotspot during the last decades. Inhabitants are interviewed, who do not confirm the rumours about big celebrations of the Eid al-Fitr (also called the Festival of Breaking the Fast), among the Muslim families living in the compound10. The author shows solidarity with the inhabitants and speaks out against their stigmatisation but does not question the metaphor of social hotspot.

BILD:
‘Riot at the Corona block in Göttingen’11 (translation by the author).
Although the author does not use the term social hotspot explicitly, the article points out different attributes associated with it. The article states that the ‘Iduna Block’ has become a ‘hotspot of the Corona pandemic’ because there had been a high number of infections after celebrations of notorious Albanian-Arab clans12. Therefore, the image of a social hotspot is created without using the term. Instead, the author creates the merged term ‘hotspot of the corona pandemic’ accusing a vaguely defined group of inhabitants with migration history of being not only violent but also responsible for the outbreak.

TAZ:
‘Prestige object turned into hotspot’13 (translation by the author).
The article criticises the report by BILD mentioned above for its use of stigmatising language. Then the author focusses on the change in the social makeup of the inhabitants of Iduna Zentrum. Whereas in the past many students of law and business lived there, now the residents are mostly refugees, people dependent on social welfare, and impoverished elderly. The topics drug abuse and violent crime at the site are also dealt with. The term social hotspot is used to underline the contrast to the picturesque old town14. The article confirms prejudices about places defined as social hotspots, but no connection is made to the COVID-19 outbreak.

The second case study is located in Berlin-Neukölln, a former working-class quarter that has recently experienced gentrification dynamics. The area where the outbreak took place is a dense residential housing block, built around the turn of the last century. When the outbreak was discovered in late June 2020, the local health authority speculated about a spread among inhabitants originally from Romania, which might have been infected during Pentecostal Christian celebrations by their priest. The whole housing block with its 370 flats was locked down and about 100 people tested positive15.

Berliner Zeitung:
‘Coronavirus: Corona outbreak in Neukölln “This is not a house of Romanians!”‘16 (translation by the author).
The author informs readers about the history of the housing block that used to be known as a social hotspot as its original owners rented out small and run-down flats to large groups of Roma people from Romania. However, ten years ago the buildings were bought and renovated by the catholic church. The author interviewed several inhabitants who articulated their anger against the authorities who, in their perspective, have stigmatised their orderly and friendly neighbourhood as well as the Roma inhabitants17. Although the term social hotspot is not critically reflected, no direct integration with COVID-19 takes places in the article.

Tagesspiegel:
‘Why COVID-19 hits the poor the most’18 (translation by the author).
The author explains that tenants in social hotspots not only have a higher risk of infection due to the higher density of inhabitants but also suffer more under the conditions of a lockdown. Statistics are also referenced, which show higher risk of severe cases COVID-19 due to higher rates of certain poverty-related pre-existing illnesses19. Although the author points out the injustice of inequality, the metaphor social hotspot is connected uncritically with COVID-19 outbreaks.

Berliner Zeitung:
‘Interview with Michael Müller on the Corona-crisis’20 (translation by the author).
The interviewer uses the term social hotspot in order to point out the stigmatisation that inhabitants of the housing blocks in Neukölln are facing. Both interviewees speak out against this but underline the success of the quarantine order over the whole block in keeping the outbreak isolated within the affected social space21. Again, the metaphor is used to point out injustice against the associated inhabitants but without critical reflection on the term itself.

The case studies show that there are different levels of escalation in which the metaphor ‘social hotspot’ is used with regard to COVID-19 outbreaks. Three of the articles do not connect the outbreaks with the metaphor directly. However, their rather unreflective use of the term social hotspot to describe urban space reproduces the stigma this metaphor prompts. Tagesspiegel and the Berliner Zeitung interview try to explain the outbreaks referring to the metaphor of social hotspots. Without critical reflection on this term, they integrate COVID-19 infections with the stigmatising mechanisms of the metaphor, even if the intention is to speak out against discrimination of the affected inhabitants. Finally, although the terminology is modified, BILD uses the metaphor to clearly agitate against ethnic minorities.

To conclude, if space is understood as the interaction of natural environment, built typologies and people in physical and social processes, the analysed discourse on COVID-19 outbreaks has a significant influence on the production of space. By associating the pandemic to geographical areas defined as ‘social hotspots’, the virus becomes a socio-spatial element, a module, in the urban system. However, as Susan Sontag points out, this metaphorical process has real political effects, resulting in discrimination against disempowered groups of people. Therefore, the infiltration of stigmatizing metaphors in the production of space should be prevented.

Special Issue - COVID-19 one year in

Notes
What a year
Preface

Post(covid)cards
A reward for resilience
– from Julian Dobson, Sheffield, 19.05.2020

Post(covid)cards
The spontaneity of the lights
– from Taher Abdel-Ghani, Cairo, 20.05.2020

Post(covid)cards
Could workplaces give space to schools?
– from Arnav Prakash, Kolkata, 25.05.2020

Post(covid)cards
Looking for an urban oasis…
– from Georgina Eleftheraki, Athens, 16.06.2020

Post(covid)cards
Walking together during self-isolation
– from Nonument Group, Ljubljana, 21.07.2020

Post(covid)cards
Through and beyond horror (space and time) vacui in Catania?
– from Elisa Privitera, Sicily, IT, 22.07.2020